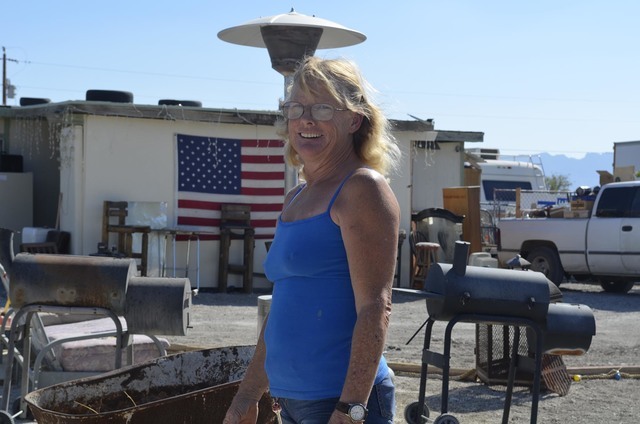 Officials will inspect a Pahrump property after some neighbors complained about an alleged nuisance.

Nye County Commissioner Donna Cox directed staff to go to the property in the 1100 block of Dyer Road and bring back a safety report by the Sept. 20 meeting after a discussion at the commission meeting last week.

On July 12, commissioners gave residents 30 days to clean up the property. However, several neighbors have since complained about its yard. One neighbor said her cat had caught a rodent.

Neighbor Mary Dixon said the property has not been cleaned up properly.

Lloyd Rowland, one of the property’s resident, said that “progress is being made and has been made.”

“Stuff is still in progress, not nearly as much but it’s not as much to be noticed,” he said.

Ann Hare, who moved to the 1100 block of Dyer Road in June and brought an assembly of several trailers and miscellaneous items from her previous residence, said that she had recycled aluminum that was in the front yard.

The property has three trailers, tires and steel.

“I have a lot of stuff. I wasn’t done moving when they filed (nuisance) against us. But all the recyclables and all that stuff was out here. I cleaned it all up for everybody, and they are still complaining,” Hare said.

“You do have neighbors that still believe that there’s a problem there,” Commissioner Frank Carbone said. “We are also starting to see animals, rodents that we don’t usually see in this desert; they are showing up in that neighborhood as well.”

Cox said she wants the property to meet the “requirements” of the residential neighborhood, satisfy the neighbors and satisfy the laws that apply to zoning and building codes.

“I don’t think it’s so much a matter of you throwing away, as it is putting it in the backyard, putting up a decent fence, making it so it’s compatible to the neighborhood. It’s not compatible with the neighborhood right now,” Cox said.

Commissioner Lorinda Wichman said the commissioners’ job is to determine whether or not the nuisance was abated and if there’s no longer anything that poses a health or safety risk to the neighborhood.

“Our job up here is to determine whether or not there is a health, welfare or safety issue. If there are other issues concerning the way things are built or how far they are located from the fence and this kind of stuff, it goes directly to planning and that what code compliance is for,” Wichman said.

“The nuisance is a safety and a health concern to the neighbors,” Wichman said. “So, if there continues to be a health and a safety issue to the neighbors, then by all means, we need to pursue that. If that has been removed, we also need to recognize that.”