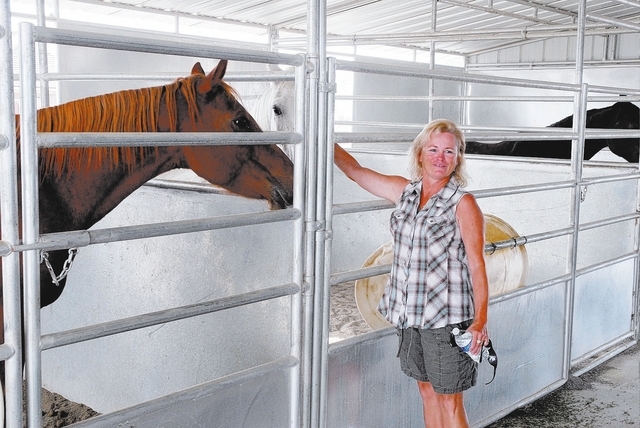 Merlino said she consulted with Nye County District Attorney Brian Kunzi Thursday afternoon on how to proceed after different stays were placed on the circuit court decision.

“He feels even though some of the counties see it a little differently he feels right now in this window we should issue licenses if they come in,” Merlino said. “He feels that might change after 5:00 but he feels we should do what we are directed to do. I know some of the other counties are holding off.”

“If it’s reversed a lot of those marriages would be illegal, so a lot of people are waiting on that,” she said.

Merlino informed county commissioners Sept. 16 they were changing the standard wedding form in anticipation the Ninth Circuit Court would strike down the gay marriage ban.

Merlino said the change on the marriage license involves whether to use bride and groom as the standard language.

“We already have it set up with the vendor to change those forms,” she said. “We haven’t decided how we’re going to do it yet. We might have two sets of forms, one says bride and groom because they want that traditional word and we might have another one that says party one and party two.”

Seventy-three percent of Nye County voters supported the Defense of Marriage Act in 2002, which was an amendment to the Nevada Constitution declaring, “only a marriage between a male and female person shall be recognized and given effect in the state.” Statewide 67 percent of the voters approved the amendment that has now been struck down by the courts.

Merlino said county staff will comply with the new law regardless of anyone’s personal beliefs.

“We just feel this is our job, we’ll do it,” Merlino said. “It doesn’t matter how we feel religiously… My staff doesn’t have a problem.”

Pahrump resident and openly gay activist Gail Clampit welcomed the news, comparing the gay marriage ban to when blacks and women were denied the right to vote. She said people need to embrace diversity.

“I would marry someone if I had that true love soulmate,” said Clampit, a 53-year-old, retired Las Vegas Metro police sergeant, who owns six horses and livestock. “It’s going to happen to gay people too.”

Clampit said being gay is something that someone is born with and that can’t be changed.

“I was born gay, that’s how I feel,” Clampit said. “I’ve always been attracted to women, when I was younger and I was with women, maybe I would’ve married them.”

The social change of same-sex unions goes beyond marriage, but legal protection in divorce and being legally part of someone’s life decisions.

Not everyone supports the change.

Rev. Carole Fucillo, owner of Forever and a Day Wedding Ceremonies and a minister at the Church of God, said she will not perform same-sex ceremonies.

“I won’t do gay weddings,” Fucillo said. “I will not do them. That’s my prerogative as a pastor. I go by the word of God and if they want to go into Vegas, they can go into Vegas. But no I won’t, absolutely not.”

She averages about 35 weddings per year that she describes as a highly spiritual and romantic ceremony between two people, with religion thrown in if the couples desire.

“It’s against the word of God,” she said. “I defend my way which is God’s way. If somebody else wants to do it, that’s their business.”