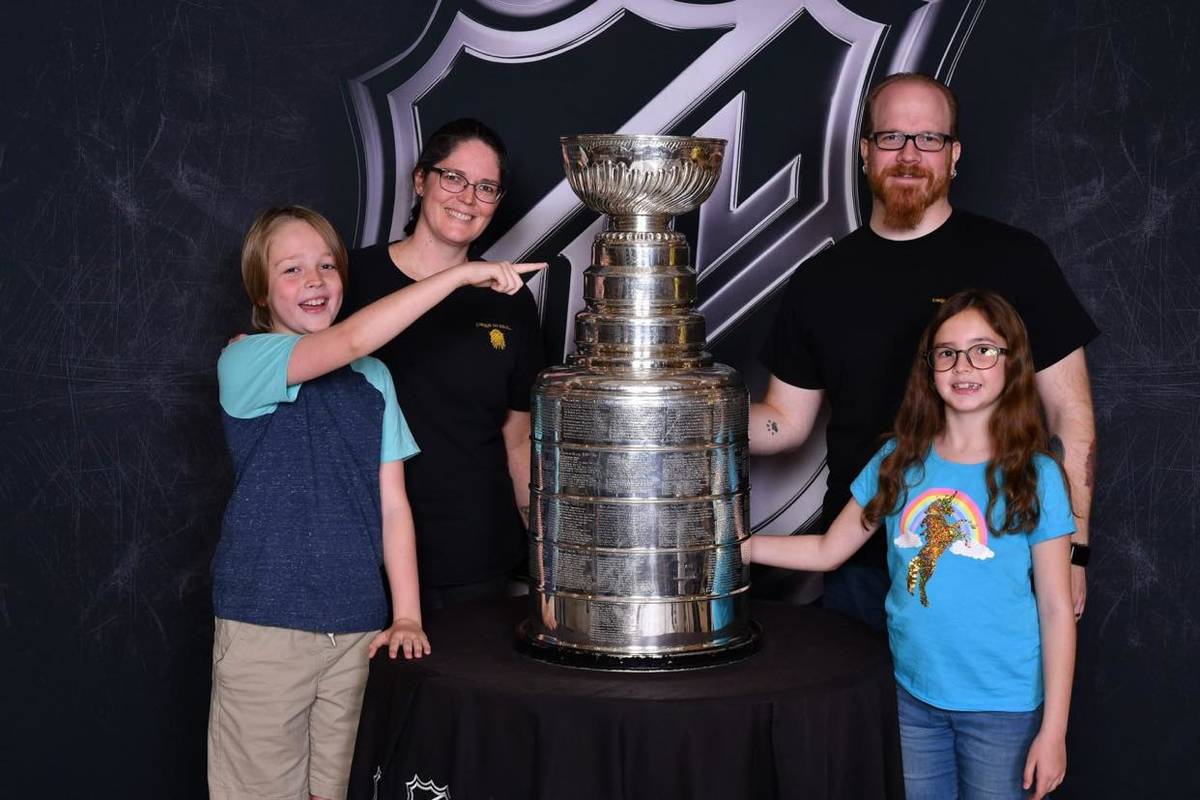 Aaron and Jennifer Bush are pictured with their son, Alexander, and daughter, Charlotte. (Bush family) 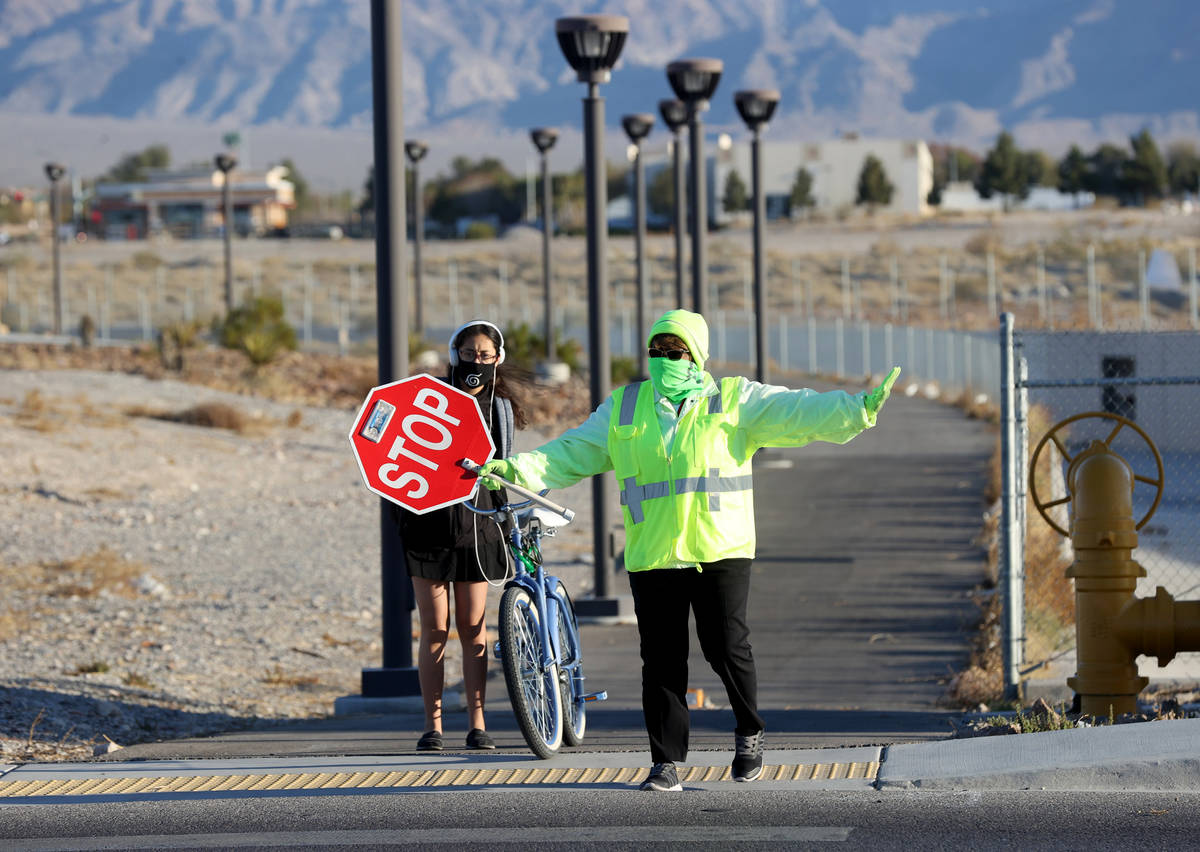 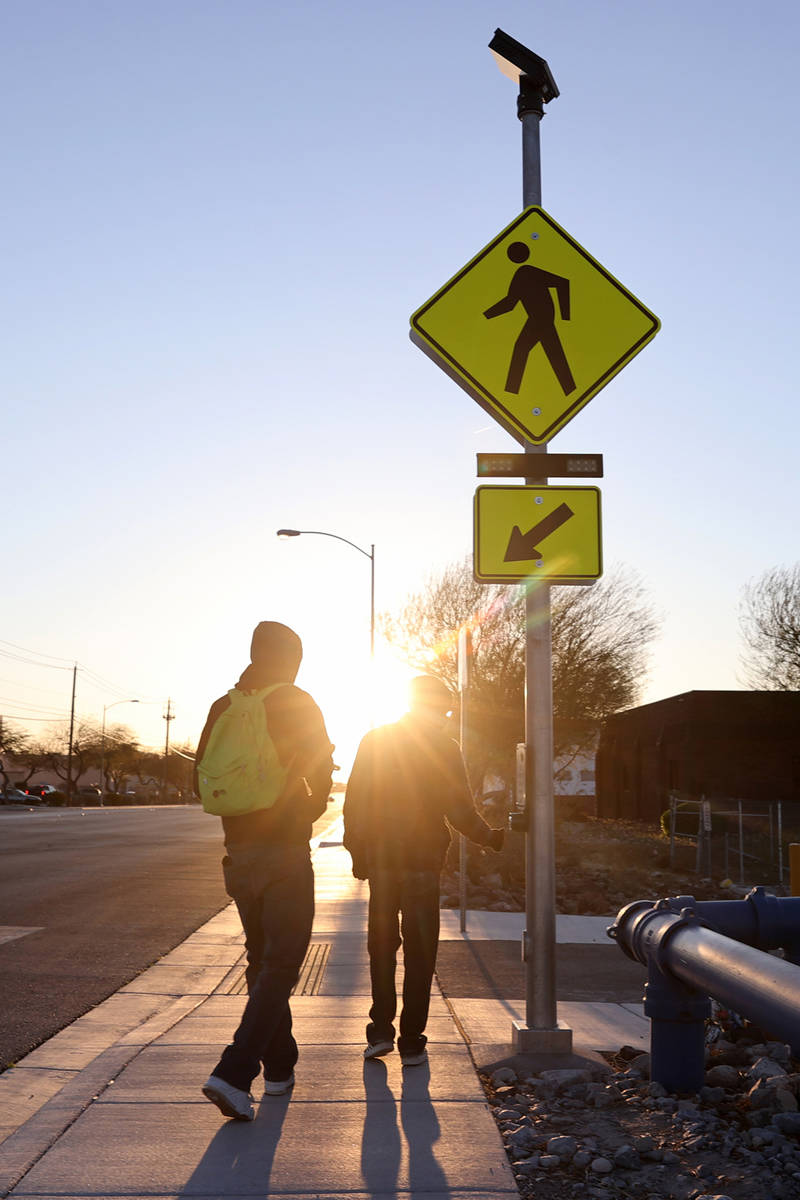 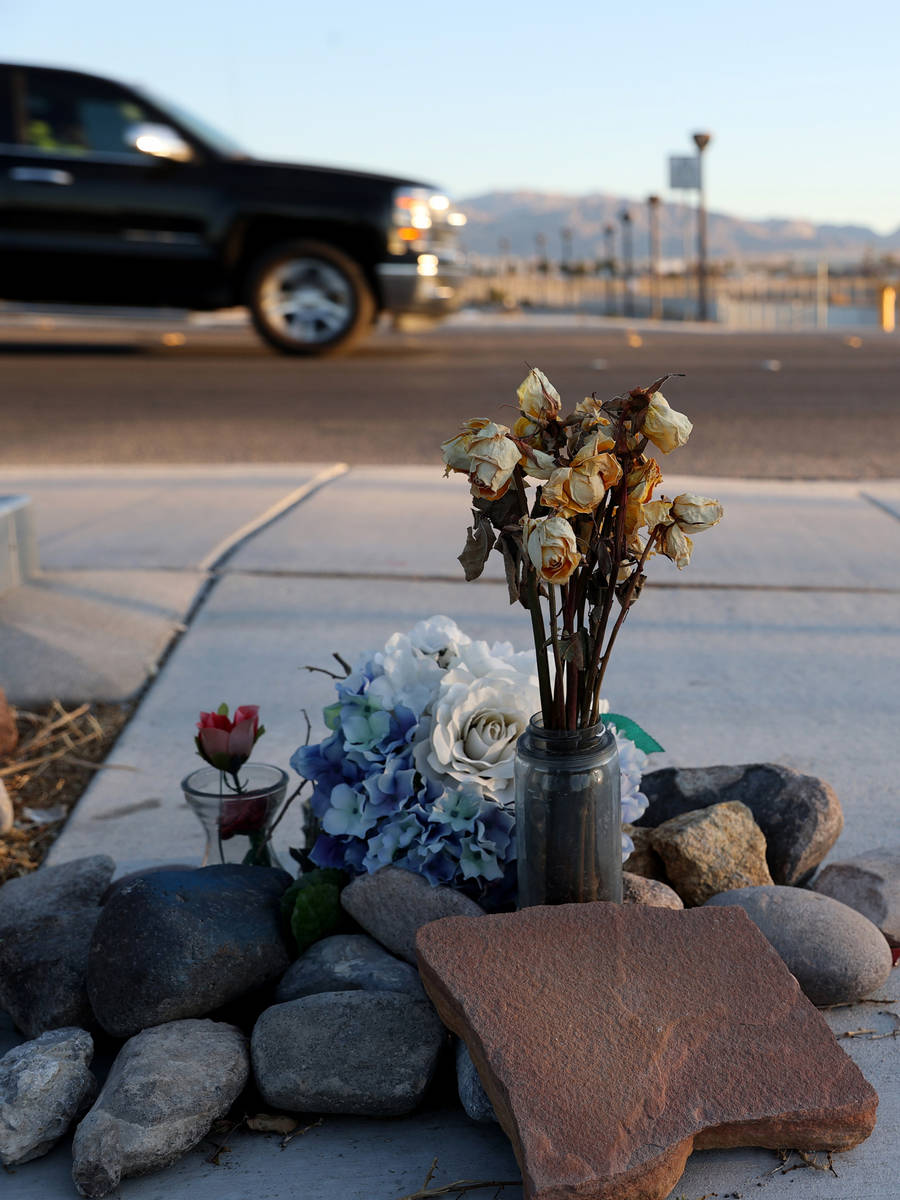 A memorial at a crosswalk on Lone Mountain Road near Losee Road in North Las Vegas Wednesday, March 24, 2021, where two Somerset Academy students were struck by a pickup truck in February 2020, killing one. (K.M. Cannon/Las Vegas Review-Journal) @KMCannonPhoto 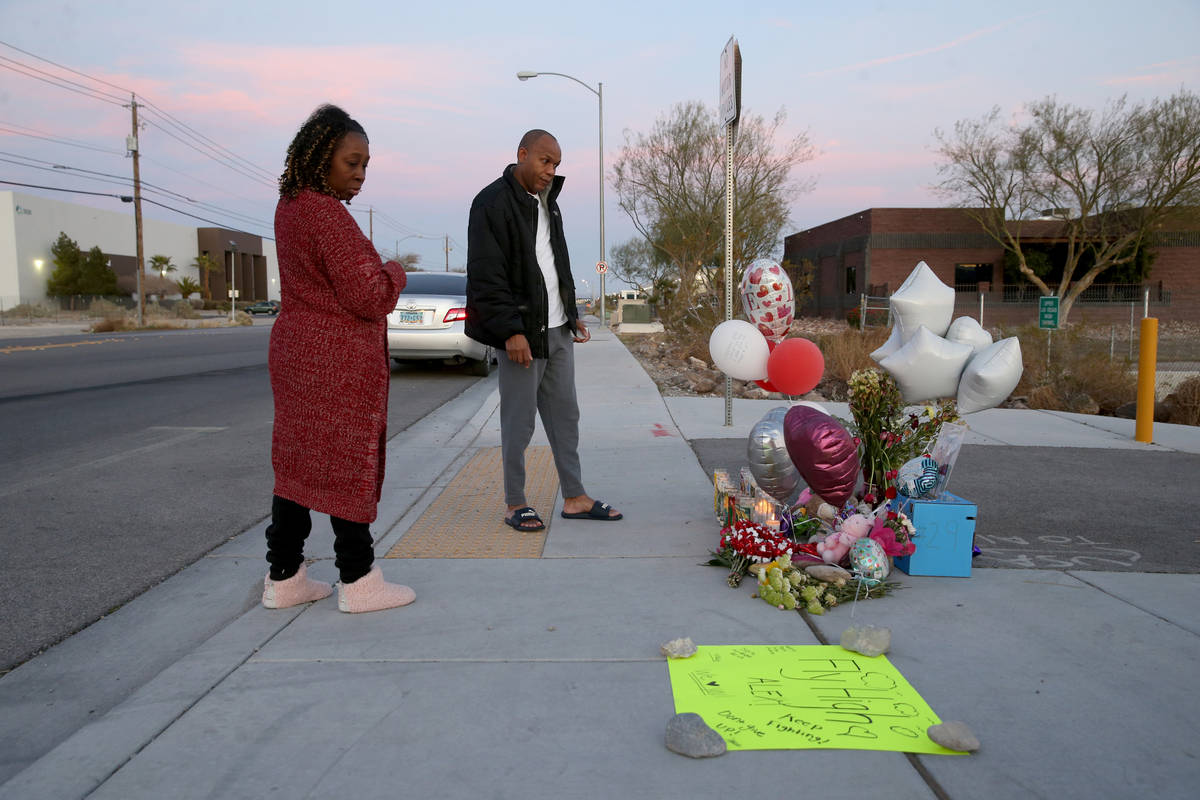 Michelle Johnson and Roy Simms of North Las Vegas pays their respects Monday, Feb. 17, 2020, at a memorial for a 12-year-old boy who died Friday after getting struck by a pickup truck in the crosswalk on Lone Mountain Road, just east of Losee Road in North Las Vegas. (K.M. Cannon/Las Vegas Review-Journal) @KMCannonPhoto 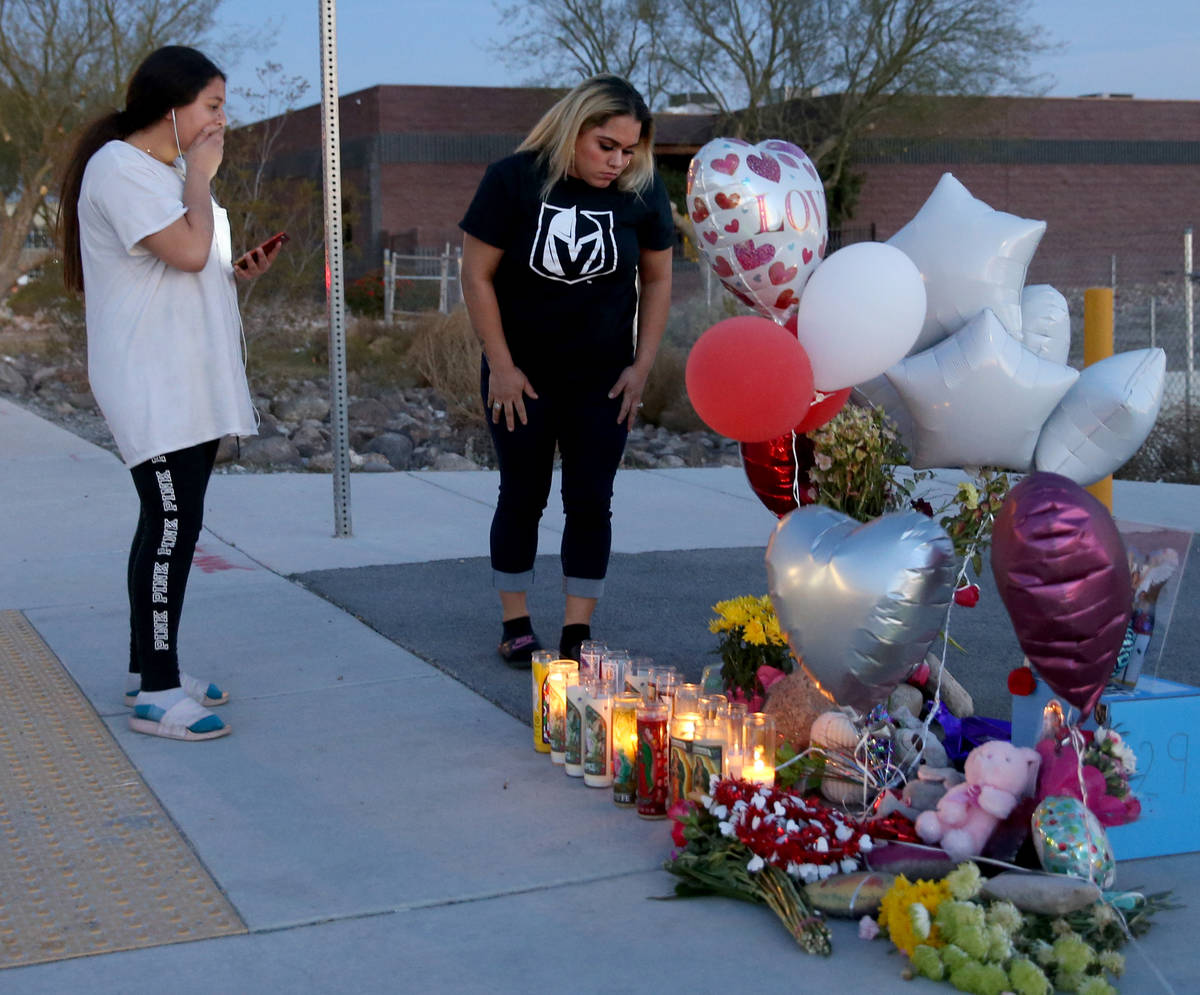 Melany Romero, 11, a fellow student of a 12-year-old boy who died Friday after getting struck by a pickup truck reacts with her mother Ana Romero Monday, Feb. 17, 2020, at a memorial for in the crosswalk where he was hit on Lone Mountain Road, just east of Losee Road in North Las Vegas. (K.M. Cannon/Las Vegas Review-Journal) @KMCannonPhoto

Aaron and Jennifer Bush want to see something positive come from the pain their family endures every day.

On Feb. 14, 2020, the couple’s 12-year old son, Alexander, and their younger daughter, Charlotte, were struck by a pickup as they walked home from school at Somerset Academy’s Losee Campus in North Las Vegas.

Alexander was killed, and Charlotte was critically injured. Together, they were crossing Lone Mountain Road in a marked crosswalk near Losee Road when police said the truck’s driver, distracted by a GPS app on his phone, ran over the children.

“Pretty much everything that we knew and worked for is gone,” Jennifer Bush said, noting that Charlotte, now 10, requires 24-hour medical care.

The devastation caused by the crash, the couple said, is immeasurable, but they want to use their experience to help change the law when it comes to distracted driving and vehicular manslaughter in Nevada — while at the same time improving roadway safety for others.

“We want to make sure that this never happens again to someone else,” Jennifer Bush said.

In the Silver State, a first offense for distracted driving carries a $50 fine. Vehicular manslaughter is a misdemeanor charge that carries a maximum penalty of up to six months in jail and a fine of up to $1,000 for first-time offender.

The Bushes believe those punishments are too lenient and do not dissuade people from driving while distracted.

“What’s frustrating is there are laws against cellphone usage in your car,” Aaron Bush said. “Your No. 1 priority is driving. You should be looking at the road the entire time.”

He said the penalty now for a first-time, vehicular manslaughter offense is “not just a slap on the wrist — it is a slap in the face to the people who have to suffer the most.”

Days after the crash, students who regularly crossed the street where the Bush children were hit told the Las Vegas Review-Journal that the crosswalk’s markings were faded and that, in the daytime, its small flashing warning lights were barely visible in the sunlight’s glare.

“Cars just run through it, and they don’t really stop,” one student said. “They only stop if they see you, and if they can’t see you, they are just running through, and you have to stop yourself.”

An inspection of the crosswalk showed that since the crash, the crosswalk lines have been painted and crossing guards are in place to shepherd students across the road.

An arrest report for Mark Kline, the 47-year-old pickup driver who hit the Bush siblings, said that officers spoke with him after the crash.

“Kline had told (the officer) that he had turned onto Lone Mtn and his GPS had rerouted him, and he looked down at the center column where he had the gps/phone sitting when he felt the impact from striking the pedestrians,” the report said.

Kline, police said, immediately stopped his vehicle and ran to help the victims. Though evidence indicated that Kline was distracted, there was no evidence that he was speeding or impaired, according to Deep Goswami, a senior deputy with the criminal division of the North Las Vegas city attorney’s office.

Goswami said the circumstances of the case did not meet the legal requirements for a felony reckless driving charge, so the offense was considered a misdemeanor.

“I obviously feel like it should be elevated to a more significant crime but, unfortunately that’s the way the law is written,” Goswami said. “So that is where the punishment is.”

Court records show Kline pleaded no contest in February to failure to use due care around a pedestrian; failure to pay full time and attention to driving; failure to maintain lane/improper lane change; and vehicular manslaughter.

His sentence included 120 days of house arrest; a 60-day suspended jail sentence for no less than a year; about 200 hours of community service; and more than $2,200 in fines and assessments. He was ordered to complete a Level 2 traffic safety school and complete a victim impact panel.

Kline’s attorney, Dayvid Figler, declined to comment for this story. He previously told the Las Vegas Review-Journal that Kline was devastated by the tragedy. Kline worked in construction and volunteered as a youth football coach, Figler said at the time. Kline was also a neighbor of the Bush family.

Andrew Bennett, spokesman for the Nevada Department of Public Safety’s office of traffic safety, said there were 59 fatalities caused by distracted driving in Nevada between 2015 and 2019, accounting for 3.7 percent of the state’s traffic fatalities.

Distracted driving is often enforced through municipal ordinances, including failure to maintain full time and attention, Bennett said. Under state law, there is one statute related to distracted driving that prohibits the manipulation of a handheld electronic device such as a cellphone while driving.

“It is $50 for the first time, $100 for the second time, $250 for the third time within seven years,” Bennett said of the punishment for using your phone while driving.

By comparison, Bennett said a first-time DUI offense can cost a defendant about $15,000 for legal fees, fines and all required classes. For cases involving traffic infractions that result in fatalities, authorities are obligated to show a willful disregard for public safety on behalf of the driver — such as excessive speeding — to file an elevated charge of felony reckless driving.

“Nevada has some of the lowest penalties for distracted driving in the country,” Bennett said. “Are people comfortable with that? Do people think it is enough?”

In the most recent state legislative session, North Las Vegas presented Assembly Bill 10, which sought to elevate the charge of vehicular manslaughter to a gross misdemeanor punishable by up to 364 days jail, a maximum fine of $2,000, or both.

Records show Aaron Bush submitted a statement in support of the bill.

The legislation did not make it out of committee.

“If you are looking at your phone — even if it is against the law — and you hurt somebody, kill somebody, damage property, there is not a whole lot that is going to happen,” Jennifer Bush said. “There is no incentive for somebody to not do it again.”

Thank you to Las Vegas

About a month after the crash, the Bush family moved to Ohio — away from Kline and closer to family as they tend to Charlotte’s constant medical needs.

But even after leaving, the Bushes said they have been overwhelmed by the outpouring of support and kindness from Las Vegas-area residents, and they wanted to say thank you to the community.

A dance school that Charlotte attended held a fundraiser. Fellow parents at Somerset Academy advocated for them, with some even serving as volunteer crossing guards in the days and weeks after the tragedy until permanent crossing guards were hired at the crosswalk.

“Support from the hockey community, people at City National and the Las Vegas Ice Center — even people we know associated with Pepsi Arena,” Aaron Bush said. “They were all doing stuff for us. Everyone within the entertainment community in the Cirque du Soleil world, families from the school.

“We want to thank the community for helping us to get through it,” Aaron Bush said. “Our focus is to say thank you to everybody.”