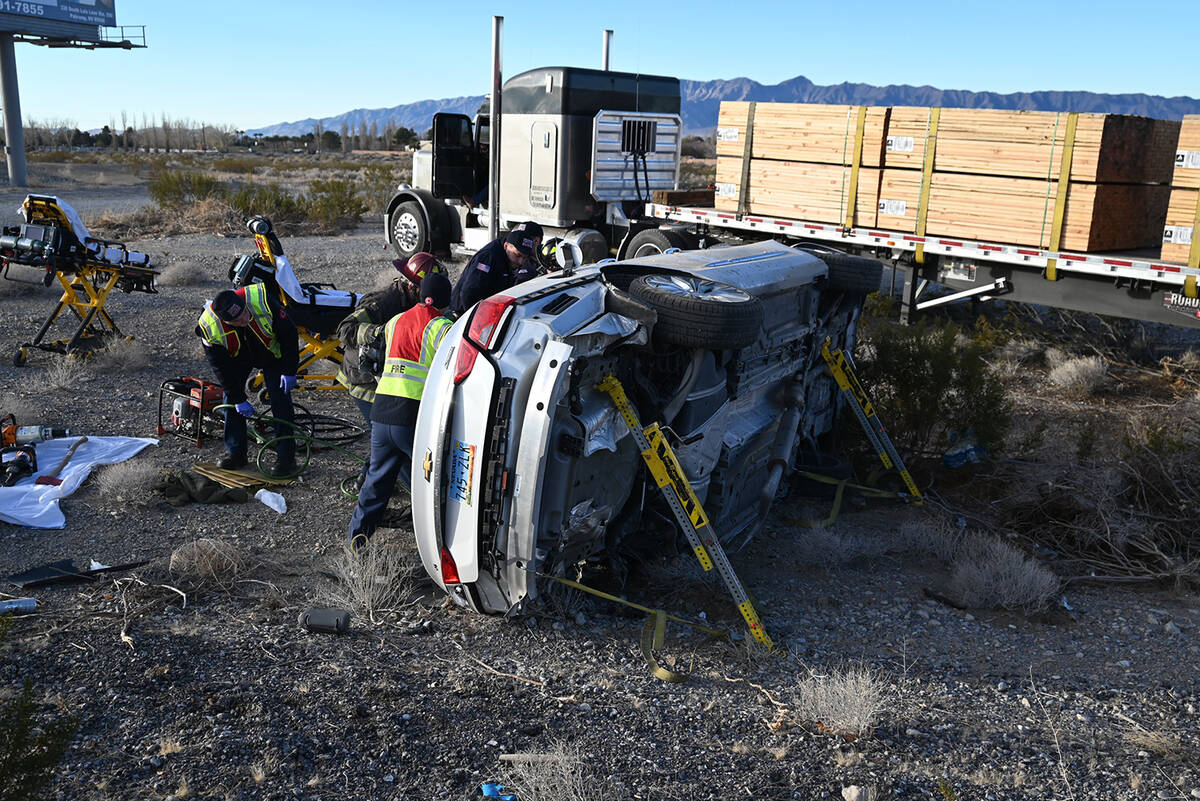 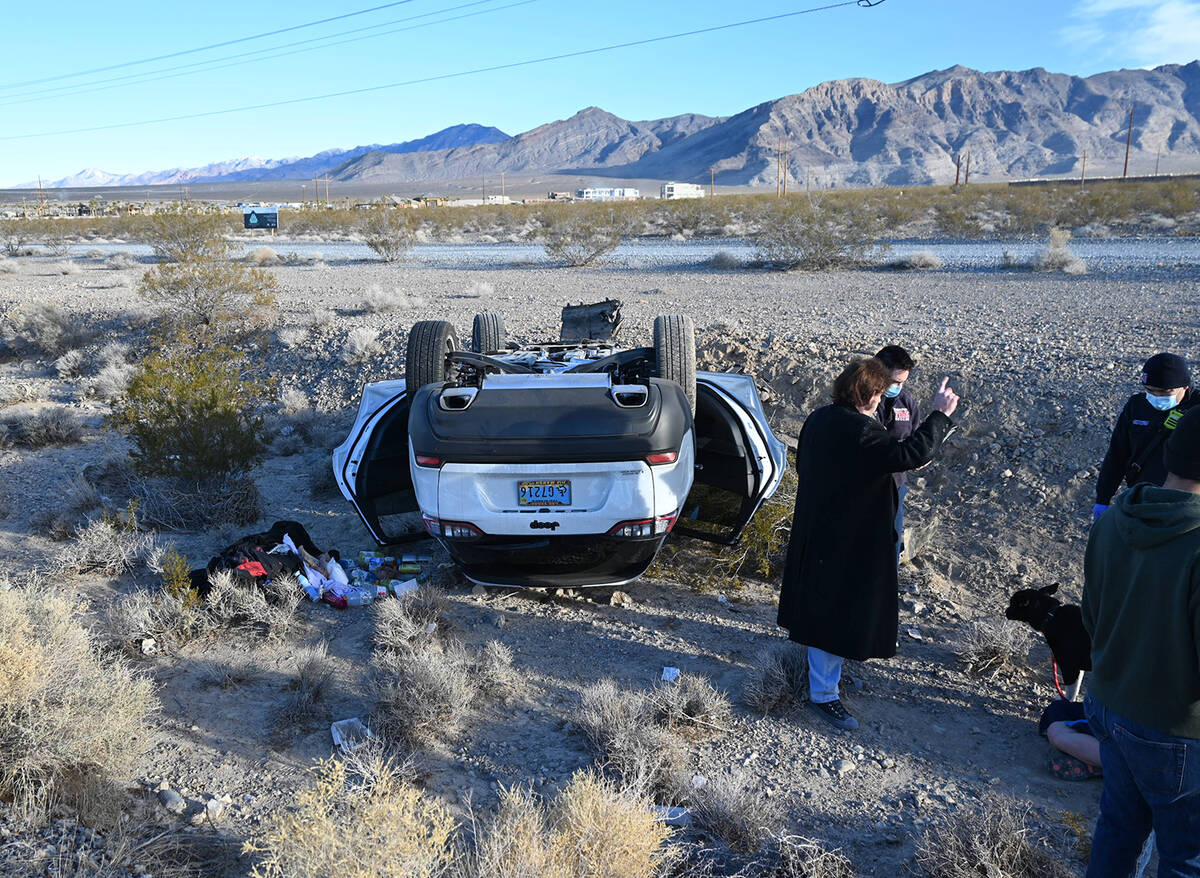 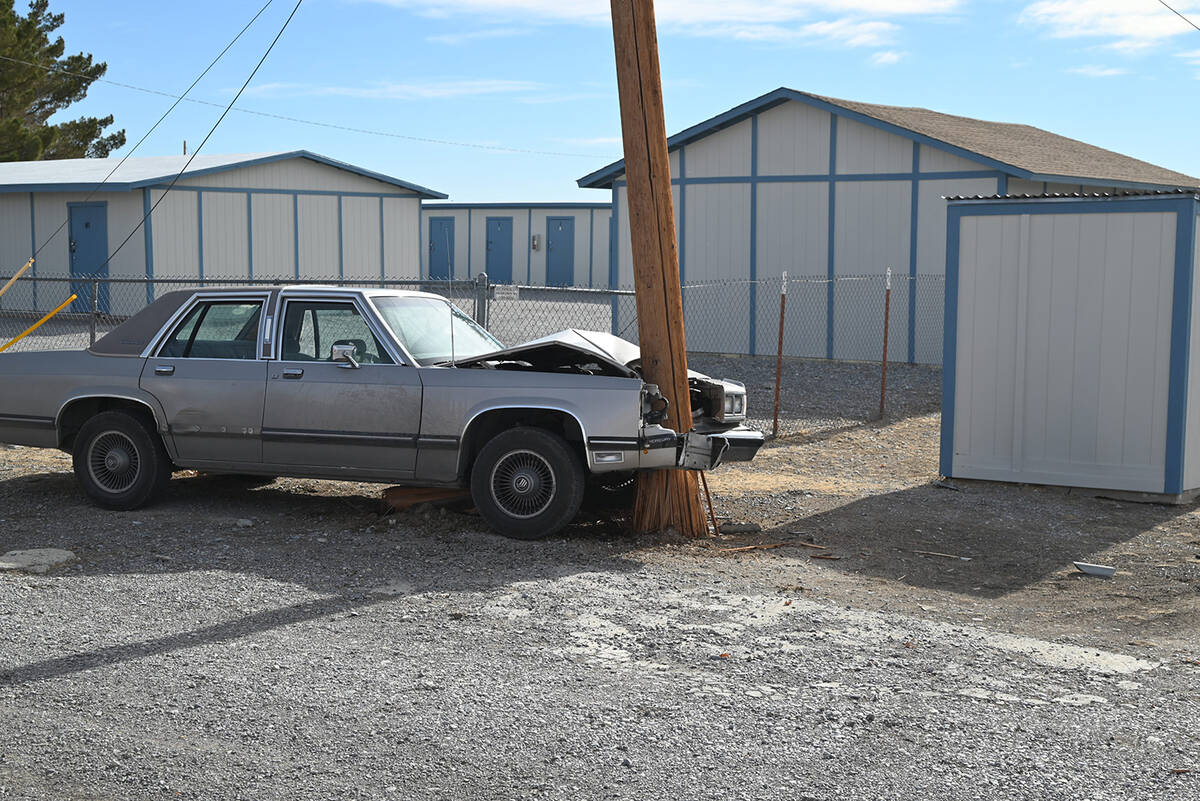 Special to the Pahrump Valley Times No serious injuries were reported after the driver of a sedan collided with a power pole along the 800 block of Wilson Road, late Monday morning Jan. 3. Pahrump first responders did request crews from Valley Electric Association to the scene where they secured the power and began the process of replacing the pole.

At least two people were transported to Desert View Hospital following a three-vehicle crash in the area of Highway 160 and Crazyhorse Street on Monday morning, Jan. 3.

Pahrump Valley Fire & Rescue Services crews were dispatched to the scene just before 7:30 a.m., where they found a vehicle on its roof in a culvert along the highway, according to Fire Chief Scott Lewis

“Upon arrival, we found the accident as described involving a car and a semi-truck, and also determined there was a third car involved,” he said. “The three occupants had self-extricated and one vehicle was resting on its left side, after a rollover-type mechanism, following a side impact. That vehicle had two people mechanically entrapped in the car. The semi-truck had missed both vehicles but had left the roadway and was resting upright and the driver was uninjured.”

As a result, Lewis enacted the department’s Mass Casualty Incident protocols because of the number of patients at the scene.

“Although we didn’t have a mass casualty number of injuries, we still operated under protocols as a precautionary measure that brought in two additional medics for a total of three, including heavy rescue, myself and an engine company to the scene,” he said. “We completed an extrication in which the vehicle that was resting on the side was stabilized, and a roof removal was completed, giving access to both patients. Mercy Air was unavailable as they were on other assignments, so both patients were extricated and transported to our local hospital. There were no leaks or spills from the semi-truck, so there were no hazards.”

Three other occupants, including a teenager, a child and an adult were medically evaluated but refused transport to the hospital.

Roughly a half-hour later, fire crews were dispatched to the intersection of Pahrump Valley Boulevard and Manse Road for a report of a high-impact, two-vehicle crash with injuries.

“While there was no medical entrapment, we began assessing a total of six patients and one of the patients met flight criteria, so Mercy-Air 24 was added to the assignment and we subsequently transported that patient to trauma,” Lewis said. “A second child patient was transported to the local hospital, and the occupants of the second vehicle declined medical treatment.”

Fire crews remained busy throughout the morning as they responded to a multi-vehicle crash at the intersection of Highways 160 and 372 just after 11 a.m.

Lewis said the sheriff’s office is investigating the incident as a hit-and-run accident, as one vehicle fled the scene after striking three others.

Although there was no entrapment, one person was transported to the hospital.

Authorities did not provide a description of the vehicle which fled the scene.

At roughly the same time, crews were dispatched for another collision on the 800 block of West Wilson Road, where the driver of a car struck a power pole.

“Upon the crew’s arrival, they found the vehicle had significant damage to the front end and also had snapped the pole at the base, and the pole was hanging precariously from the wires,” Lewis noted. “They found no entrapment and the driver refused medical treatment. The crew requested Valley Electric Association to the scene where they responded, secured the power, and began the process of removing the vehicle and the power pole for replacement.”