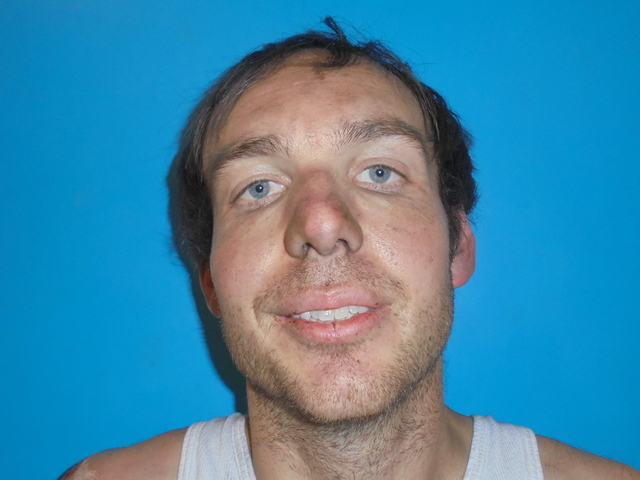 A Pahrump man was taken into custody last week after an alleged domestic battery incident involving a pair of victims, including a child.

Karl Orion Patterson was arrested by the Nye County Sheriff’s Office on April 20 and charged with domestic battery, child endangerment and false imprisonment after an argument about finances turned violent.

When officers arrived at the scene on the 5300 block of S. Bonnie Street responding to a domestic battery call in progress, they discovered two victims, one adult and one 12-year-old child, that had allegedly been battered and imprisoned by Patterson.

The victims told deputies that Patterson had fled in a black 1995 Toyota sedan into a desert area near the incident because, “the cops never go into the desert to look for people,” the arrest report stated.

Descriptions of Patterson and the vehicle he was traveling in were broadcast and he was apprehended shortly thereafter without incident.

The adult victim re-entered the residence and told Patterson that she and the children inside were going to spend the night elsewhere so the two parties could calm down, the arrest report said. At that point Patterson allegedly began asking the victim for money to which she took off her wedding ring and told him if he wanted money to take the ring.

Patterson then allegedly hit the victim’s hand, sending the ring flying across the room and then proceeded to hit her in the chest and arm, pushing her down onto a couch, according to police.

At that point the juvenile victim came out of a room in the residence and told Patterson to stop screaming at them and the adult victim stood in front of the child to protect her, the arrest report states.

Patterson then allegedly put his hand over the adult victim’s mouth to attempt to prevent her from talking. When Patterson let go, the adult victim told the child to run to the neighbor’s home and call the cops.

Patterson allegedly then shoved the adult victim into a chair and then allegedly pinned the juvenile victim on a couch, police records stated.

The adult victim then did whatever she could to get Patterson off the juvenile victim and he eventually got up after the adult victim began to choke him, police said.

The adult victim then allegedly said that they could drive to the bank where she would give Patterson money.

As they walked out of the residence the child tried to run away, but Patterson allegedly caught her by grabbing her by her neck in a choke hold.

Patterson then allegedly ran up to the adult victim and slammed her up against a fence and then returned to the house by kicking the front door in, causing damage to the frame and got his keys, the adult victim’s bag and her laptop, which he allegedly threw on the ground, smashing it.

As he made his way to his car, he allegedly shoved the adult victim in the mouth and fled the scene.

Patterson was apprehended and booked into the Nye County Detention Center, where he is being held without bond.

A Pahrump man was arrested Tuesday after he allegedly set his own house on fire while his dog was inside.

Sheriff’s deputies and detectives were dispatched to the 4000 block of Paradiso Place in regards to a residential structure fire.

Witnesses in that area told police that they saw Hardy running down the middle of the road away from the burning house screaming “let it burn, let it burn.”

The sheriff’s office stated that Hardy has a history of arrests for drug use and possession.

Sheriff’s deputies, detectives, and the state fire marshall discovered evidence in the residence that Hardy started the fire.

Hardy abandoned a small dog inside the residence after starting the fire, police said. The dog was located in the residence unharmed and was released into animal control’s custody.

Hardy resisted while deputies attempted to take him into custody, but he was eventually taken in.

After his arrest, police found what was suspected to be methamphetamine in his possession.

Hardy was transported and booked into the Nye County Detention Center, where he is currently being held on $106,274 bail.

This investigation is ongoing; anyone with information related to this case is urged to contact Detective Fowles at 775-751-7000.