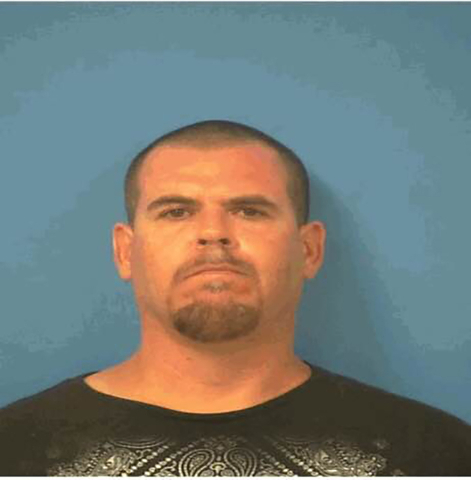 A Pahrump man was arrested Tuesday and charged with 14 preliminary counts in what began with an alleged domestic violence incident.

Christopher Mevis was taken into custody by the Nye County Sheriff’s Office Tuesday and charged with domestic battery with substantial bodily harm, theft (less than $650), four counts, possession of a dangerous drug without a prescription, possession of a controlled substance, false statement to a public officer and driver disobey peace officer, among other preliminary charges.

At 2:10 a.m., an NCSO deputy observed a vehicle run a stop sign near Blosser Ranch Road and Blagg Road and when the deputy attempted to stop Mevis, he failed to yield, the arrest report stated.

When the license plate was run it came back to Mevis, who was wanted in an alleged domestic battery incident, police said.

Mevis led police on a chase that reached speeds in excess of 100 mph, while Mevis was unable to properly maintain his lane, failing to yield to emergency vehicles, failing to obey traffic control devices and obstructing a public officer, NCSO said.

Mevis lead multiple deputies on a 70-mile chase, eventually traveling outside of Nye County into neighboring Clark County when he finally pulled over near mile marker 123, where a felony stop was conducted and he was taken into custody without further incident, police said.

The search of Mevis’ vehicle allegedly turned up 800 mg ibuprofen without a prescription and suboxome strips, in 4mg and 12 mg doses. The suboxome belonged to the alleged victim in the domestic battery case that Mevis was wanted in connection with, deputies stated.

Mevis was arrested and taken to the Nye County Detention Center where he is being held without bond.

A Pahrump man was arrested earlier this week after he allegedly pointed a gun at a couple in a desert area in town.

Bobby Webber was taken into custody by the Nye County Sheriff’s Office Tuesday and charged with preliminary counts of assault with a deadly weapon, two counts, aim a gun at a person, two counts, and obstructing a public officer.

NCSO deputies were dispatched to an area on the 1400 block of North Freedom Street in reference to a weapons offense.

When the responding deputy arrived, he met a couple who claimed that while they were posting a real estate sign, as one of them was a realtor, Webber came up to them carrying a black rifle in one hand and a revolver in the other, and started to shout at them about dumping garbage in the desert, the arrest report stated.

The couple alleged that Webber then raised the revolver up and pointed it at them so they left the area, as they were both frightened, police said.

Deputies began to search for a man matching the description the couple gave NCSO in the desert area and he was located near the alleged incident.

A deputy spotted a man matching the description and as he approached the man, the deputy noticed a black rifle sitting against a rock in front of a small cave, police said.

The deputy ordered Webber to walk down the hill he was on with his hands in the air, to which he questioned the deputy as to why he was being summoned.

The arrest report states that Webber began to walk down but refused to put his hands in the air. Webber then allegedly refused the deputy’s orders to get on his knees, so he approached Webber and placed him in handcuffs, as he was not complying to his orders.

The deputy retrieved the rifle and discovered a holstered revolver in the cave as well, which wasn’t visible from where the couple claimed the incident occurred, so the deputy concluded that it had likely been removed from the holster, because one of the victims knew it was a revolver.

Webber was arrested and taken to the Nye County Detention Center on the various charges.