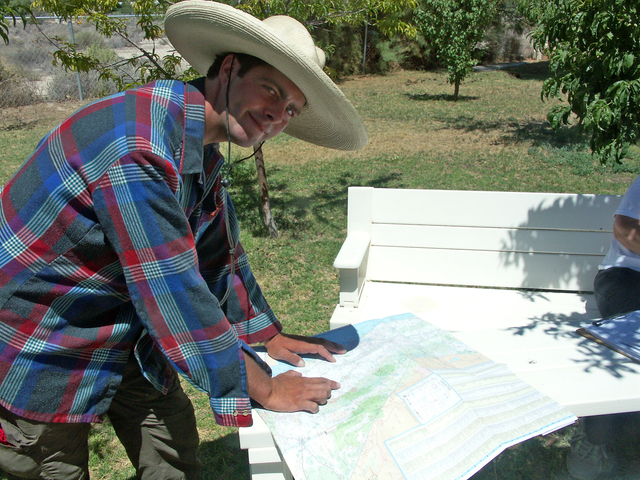 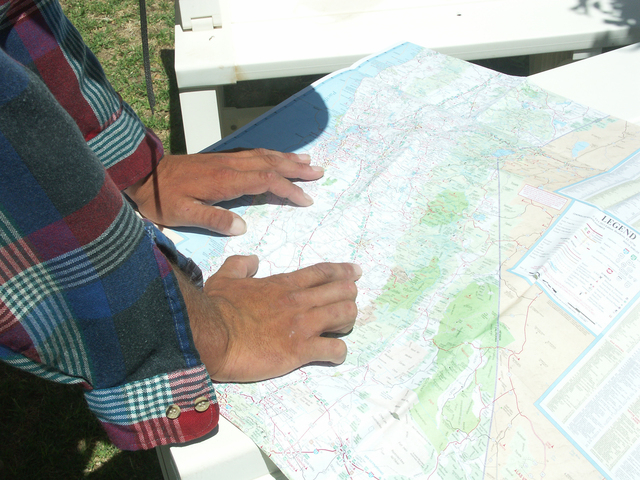 To call Michael Stafford an adventurer would be akin to calling Mark Twain a mere riverboat captain.

Though both are true, there is so much more to both men.

In Stafford’s case, the 28-year-old bachelor actually quit his job as an editor of a small town newspaper in Montana to do what most Americans would not attempt.

He is walking across the country – solo.

Born and raised in Erie, Pa., Stafford graduated from Penn State in 2007.

Roughly two years later, he moved to Philipsburg, Mont., where he worked for the county newspaper, the Philipsburg Mail.

Last year, he decided to leave his comfortable lifestyle to find what he called true happiness and satisfaction while discovering things about himself and other people in general.

The journey began on Jan. 4, of this year when he set out from the shores of Virginia Beach and began walking southwest, covering 25 to 30 miles a day.

He plans to dip his feet in the Pacific Ocean somewhere in San Francisco later this summer.

Clad in a flannel shirt, cargo pants, a wide-brimmed hat and sandals, the psychology graduate spoke about his journey and why he decided to undertake what was supposed to be a seven month trip.

The essential planning began after walking 180 miles from State College in Pennsylvania to his home in Erie.

“It’s something that’s been in the back of my mind for a number of years.” Stafford said. “The idea popped into my head completely without warning back in 2008. At the time I had recently graduated from college and I always wondered if I could walk from college back to my home, which I did. I then figured that if I could do that, then maybe someday I would walk across the country,” he said.

Over the decades many groups and individuals have attempted the feat for different reasons.

Some cross-country walks serve as fundraisers or to raise awareness for various causes.

In the case of Stafford, he just wanted to learn more about who he is and what role he plays as a member of society.

In essence, it is a personal journey.

“The ideal of walking across the country and doing something grand and chasing after this dream even at the slow pace of three miles an hour was something that I really wanted to do. I finally decided last year that I was actually going to do it. I started by putting my feet in the Atlantic Ocean and when I finish I’ll put my feet in the Pacific Ocean,” he said.

Though the most direct route from the east to west coast would be a straight route, Stafford chose to visit regions that were not on a direct path. He journeyed south, for instance, which he said offered some of the most beautiful scenery in the country.

He noted that after a few days walking through Virginia he was forced to turn south because of a rare weather phenomenon — January’s polar vortex.

On that leg of the trip, Stafford explored parts of the Great Smoky Mountains rising along the Tennessee and North Carolina borders.

It was further south where he said were some of the most spectacular and breathtaking views he’s ever seen.

“It is very beautiful walking along the southern part of Mississippi where you have the Gulf of Mexico with the beach and the water right there to your left. There’s a pedestrian pathway along the way but you only have it for a few days and it was beautiful. Louisiana was also beautiful. Each state in this country has its own beauty, especially Nevada,” he said.

Aside from absorbing the natural beauty along the way, Stafford said the trip affords him plenty of time to think about life in general while at the same time, there are some thoughts that he can’t escape.

“I think about where I am going and the trip itself. Sometimes songs get stuck in my head way too often and they are not even ones that I really like,” he said laughing.

Stafford makes a point to travel light with only essential provisions, including a foldable map, stove, backpack and tent.

For safety’s sake he brought along his late 1990s era flip phone and bear spray, which he said he thankfully has not had to use.

During his second week of the journey, he was sick with a mild case of the flu. The first he’s had in roughly eight years.

“I don’t get sick very often. It was probably from the cold weather and rain in Virginia. I just walked fewer miles and got more rest and it seemed to have worked,” he recalled.

He said he constantly meets people who offer rides, food and even a few dollars after learning about his odyssey.

As a rule, he always walks against traffic so he can see what’s coming in his direction.

From the Gulf of Mexico, Stafford ventured toward the Texas Panhandle, where he followed the fabled Route 66 west, which took him through cities and towns in New Mexico and Arizona.

On Day 157, he crossed four times zones and arrived in southern Nevada where he walked into Boulder City and eventually Las Vegas proper.

He arrived in Pahrump via Highway 160 last Thursday when local resident Donna Cooper greeted him and opened her home as she has for many travelers over the years both on foot and two wheels.

“He sent me a couch request. Everybody who comes through here sends me a request and we try to always accept everyone. It’s a social media network where people can find out where to stay in just about any area. That’s how he found me. Sometimes we host as many as 100 people a month,” she said.

Stafford spent much of Friday preparing to walk through one of the hottest regions of the world during the hottest time of the year – Death Valley — where temperatures are expected to exceed 109 degrees later this week.

“I know it will be a little difficult but it’s not going to last forever. I will eventually make it through the heat. I drink plenty of water and if there is a strenuous part of the walk, I try to do that early in the morning. I rest when I need to and I listen to what my body is telling me,” he said.

Additionally, Stafford said there have been days and nights when his body, or at least his mind, has told him to simply quit the walk.

“I have on more than one occasion said to myself, ‘what the heck am I doing here?’ But then I also think to myself, ‘what else would I be doing and what else is there to do in life?’ ‘Why not this?’ There’s times in the morning that I would wake up and feel like I don’t want to go on but I have to get past those thoughts. Maybe I didn’t feel like it at that moment, but would it be worth giving up all of the progress that I have made just because I was not feeling up to it at that moment. When I think of it like that, I can get over the times when I am feeling a little discouraged and continue on,” he said.

His apparent steadfastness will allow him to eventually write about his cross-country adventure as he also brought along his laptop to chronicle his trip.

Stafford said he plans to meet up with his sister in the Golden State who is driving in from Erie.

Both will use a more modern mode of transportation for their return trip home — an automobile.