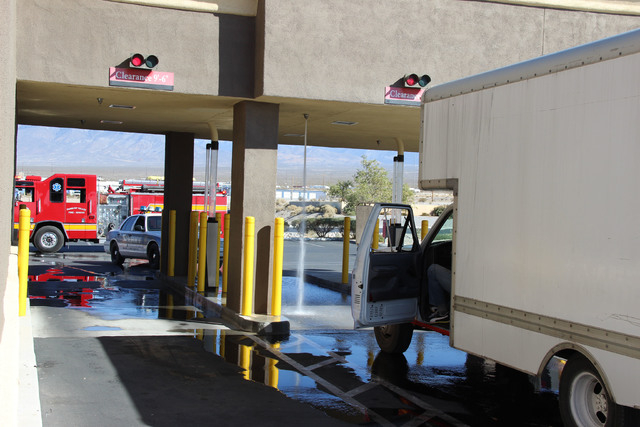 A local man looking to do a simple bank transaction unexpectedly received a free car wash on Tuesday afternoon.

The man was pulling into the Wells Fargo Bank drive-thru ATM when his high-profile truck struck the overhead sprinkler spigot which released a deluge of water, saturating the vehicle and presumably the driver.

On Wednesday, Tony Timmons, Wells Fargo Bank assistant vice president of corporate communications, said he’s grateful the damage to the sprinkler system was moderate and no one was hurt as a result of the incident.

“It was only the sprinkler head in the drive-thru that was damaged and it has been repaired,” Timmons said. “The drive-thru is back up and serving customers again today.”

Additionally, Timmons noted that because the incident occurred on a national holiday, there was little inconvenience to the customers.

“We were closed on Veterans Day and hopefully there was little to no impact from it,” he said. “I can’t recall any similar incidents like that. It was a minor incident from our perspective and our teams worked quickly to restore the sprinkler system and our customers weren’t impacted.”

Pahrump Valley Fire and Rescue Chief Scott Lewis said though the damage was minor, the system will require a complete inspection before it’s operable.

“When you tear the head off, you have to have a certified sprinkler company to come out and make the repairs and they have to test the system,” Lewis said. “It’s more of a process. The structure itself wasn’t damaged, it was just the head that was torn off.”

Additionally, the fire chief said a pretty good amount of water flowed through the broken sprinkler before the valve was manually shut off.

“It was about a one-inch line, so it could generate about 60-to-80 gallons of water per minute,” he said. “It’s actually not the first time. That’s at least twice that I’m aware of at that location.”

One local resident who identified himself as Chuck, arrived at the bank shortly after the mid-day incident.

“After he hit it, it looked like he backed out,” he said. “The water was coming down and the poor guy just sat there. They had to get the manager of the bank to come down and open up the place to turn it off.”

While he’s not entirely certain, Lewis said sometimes drivers tend to misjudge the clearance of an overhang especially if they are not familiar with the vehicle.

“It’s not always their vehicle because they’re driving a rental or borrowed vehicle,” Lewis suggested. “They’re just not familiar with the height and think they can make it through there.”