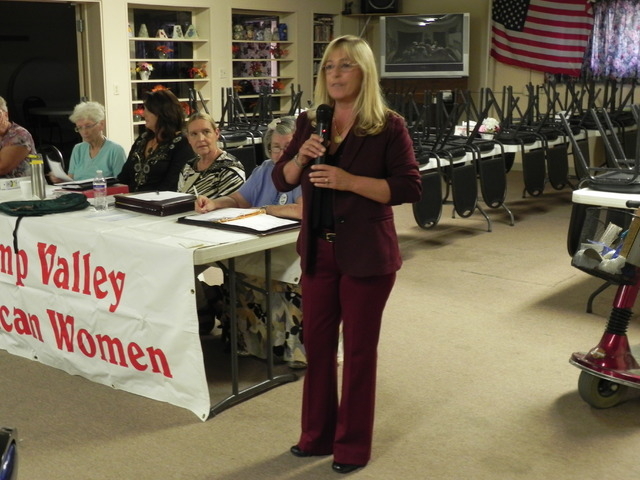 “But as it turned out, serious times maybe call for serious measures. This county, our state and our country, we’re at a serious crossroads. We pretty much lost all faith in our leaders at the federal level who don’t take accountability for anything and have now taken to using the United States Constitution to advance their own political agenda,” she said. “The state, well they’re not faring much better either are they?”

Bello was criticized by her opponent, incumbent DA Brian Kunzi, a Democrat, for not appearing at some campaign appearances before the primary. Bello was unopposed in the Republican primary and advanced automatically to the general election Nov. 4.

“I don’t have any big problems, any sex scandals. As a candidate running in this race, I’m quite boring in that way. But what I do have is a lot of passion, experience and I’m committed, committed to fair and equal justice, committed to defending the rights of the county and to promoting transparent, accessible and accountable government,” Bello said to applause. “I have spent most of my life working hard and earning what I have in the private sector where accountability is demanded and developing good relationships and communication with those that pay the bills is crucial. So in that way I would bring that to this office.”

Bello is a 1979 graduate from Las Vegas High School. She described raising a son while attending the University of Nevada, Las Vegas She earned her bachelor’s degree in 1995.

Bello received her law degree from the University of San Diego School of Law. She was a clerk for one year for who she called the legendary Gene T. Porter in Las Vegas’ eighth district court.

During her career Bello was trial counsel for the Wolfenzon and Rolle law firm, which she left to campaign for DA. Her cases included a memorable one defending the MGM Grand Casino after the bedlam following the Tyson-Holyfield fight. She also had her own solo law practice at one time.

Bello said she plans a number of changes to the district attorney’s office, including transforming the DA’s link on the Nye County website, which she said is substantively empty, to a resource for residents to get information, have questions answered and let victims learn about their rights and how they can take part in the judicial process.

“I will implement a number of new measures to communicate with one another that are not currently available. I will also implement policies that let people know that we are very concerned about their future and want to know what their ideas are on how we can improve. Our decisions will be as transparent as possible and our actions will follow. With me what you’ll get is a district attorney with core values, vision and a commitment of what’s important to the community,” Bello said.

“I believe in a limited government that gets out of the way of law-abiding citizens and protects their rights while at the same time has zero tolerance for those who would violate the personal or property rights of others or intentionally violate the public trust. My vision is clear, it is of an office that is sufficiently run, it is transparent and fully accountable,” she said.

While conceding a district attorney can’t be all things to all people, Bello said, “what I can do is always act without bias, respect the constitution, the rights of every individual and to pursue serious criminals with the veracity of a pit bull,” Bello said to applause.