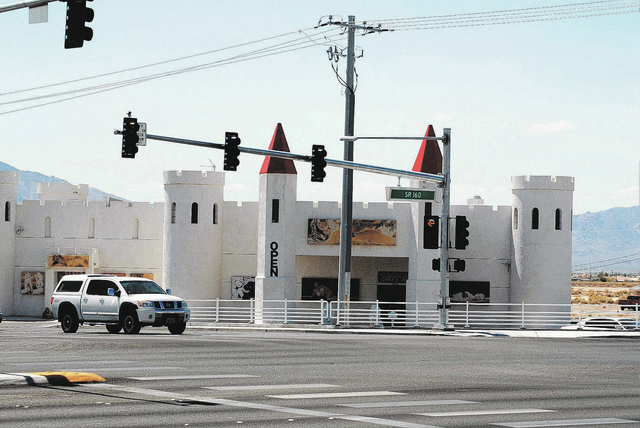 Local residents may notice a wholesome new look at the intersection of State Route 160 and Homestead later this year.

Pahrump Town Board member Amy Riches said a proposal to de-annex property on Homestead Road in Pahrump’s so-called “Red Light” district will go before the town board next Tuesday.

The deal, if approved, should clear the way for the closing of the Kingdom Gentleman’s Club.

Kingdom owner Joe Richards owns the land that will be de-annexed and he will likely be able to develop another adult-themed business at that location or at least get zoning approved that will make his property more valuable.

Riches said on Thursday that the property the town will de-annex was zoned to be within the Town of Pahrump boundaries more than a decade ago, but was originally designated “Brothel.”

She noted that since Pahrump does not hold such licensing, the property should be de-annexed in return for an agreement regarding sexually-oriented businesses at Homestead and 160, where the Kingdom currently sits. Many local residents have expressed outrage that an adult business was allowed to open in such a high profile town location.

“Joe Richards was going to convert the gentleman’s club into a juice bar and have 18-year-old pole dancers. It would have been open for people 18 and up because they would no longer serve liquor. A lot of kids from what I hear walk home from school over there and it must be an eye-opening experience for them. Joe Richards said if we annex the property back to the county, he will go along with it,” she said.

Former county Commissioner Gary Hollis said he has been working on getting the gentleman’s club moved away from the busy intersection for several years.

“I had been having talks with Joe Richards and I got him to agree to take everything down if the town would take that property near Sheri’s and make it brothel property. I went to the town and got an agenda item to talk to the town board about de-annexing the property. I don’t know if Joe Richards is going to apply for a brothel license down there on Homestead but my job is to take care of the town and county interests,” Hollis said.

The former commissioner added that signage at the gentleman’s club may soon be taken down if town board members vote to approve the item.

“I don’t think many people want to see photos of semi-nude women right there on one of the busiest intersections in town. When this thing gets done, Joe will walk out the doors, lock the place up and it’s done with. I think it’s a good deal if we get this out of the picture and on January 28, I’ll go before the town board … Joe just wants to have a zoned brothel on south Homestead,” Hollis said.

Regarding the proposal, Richards said this week that it’s all in the hands of both the town and county.

“If they go ahead and do that, I’ll agree and let’s go, but I’m not pushing it, it’s up to them. All they have to do is go ahead and zone that brothel down there because the property is in town and the town doesn’t allow brothel licensing in the town so they have to kick it back out of the town to make it eligible. It’s up to them so it doesn’t make any difference to me. If they do, then I will move and that will be the end of all the adult stuff on the corner of 160 and Homestead. There’s five acres there. It’s a pretty nice piece of property and very valuable,” Richards said.

At present it is unclear what will replace the gentleman’s club at 160 and Homestead, though Richards said he has had a few inquiries in the past. One official speaking in confidence said a shopping center could go in at that location.

“Years ago the Hilton wanted to buy the property but I didn’t have enough room for a hotel or casino. I didn’t have five acres,” he said.