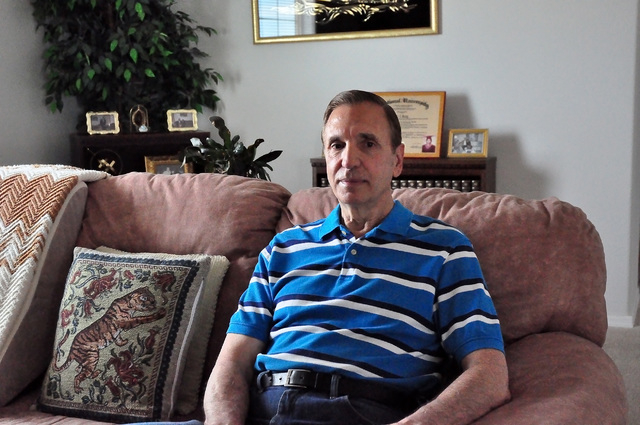 Editor’s note: The Pahrump Valley Times will be running articles on all the candidates seeking a Nye County Commission seat, and candidates from other races, during the next few weeks leading up to the start of early voting on May 28.

Chicago native and retired businessman Louie DeCanio, who recently filed for the Nye County Commission, wants to run the county like an “efficient business” while preserving Pahrump’s rural lifestyle.

In an interview with the Pahrump Valley Times, DeCanio said he was against new high-density housing and well meters. He also said he wanted all new housing with well and septic tanks to be on a minimum one acre of land.

“I do not want Pahrump to be a big city,” he said. “I like our rural lifestyle, but we still have to give people the opportunity to have things that are nice.”

“You can still stay rural and have nice homes, have nice infrastructure, have nice businesses and stuff. And for some reason, from what I see, it’s being held back.”

The district contains a large amount of the area’s retail commerce, running along Highway 160 from Bell Vista Avenue in the north to Winery Road in the south. It also includes the north side of Highway 372 west to Barney Street.

DeCanio moved to Pahrump in 2003. Prior to that, he had operated several businesses in Chicago and worked in construction and as a foreman. He said he wants to make Pahrump more “business-friendly,” by “streamlining” the process and “eliminating the roadblocks.”

“You can’t keep putting up a roadblock and expect people to come here. They are going to go someplace else,” he said.

He also said businesses need incentives to come to Pahrump. This will create jobs and “a cycle of money” that goes throughout the entire county. DeCanio said his business experience in Chicago will benefit county residents.

“When there was a problem, I didn’t run in the back, I was the first guy out there to solve that problem,” he said. “And that’s the way you do things. When something happens in your place, or your county or your business, you are on the spot, you don’t just push it off, you get there.”

“I feel that I’ve got the experience. Like I said, I’ve been in business, I know what bureaucracy is,” he said.

He also criticized the 5-cent gas tax that was passed by Nye County commissioners.

“Raising taxes should never be a solution, it should be a last resort. It’s that simple. We will have enough tax money to do things if you bring business in,” he said.

“My experience in business, finance, legal issues clearly shows that I will work hard to make sure our children, senior citizens, veterans and all hard-working people of Nye County will be properly represented and our tax dollars will be spent wisely,” he said.