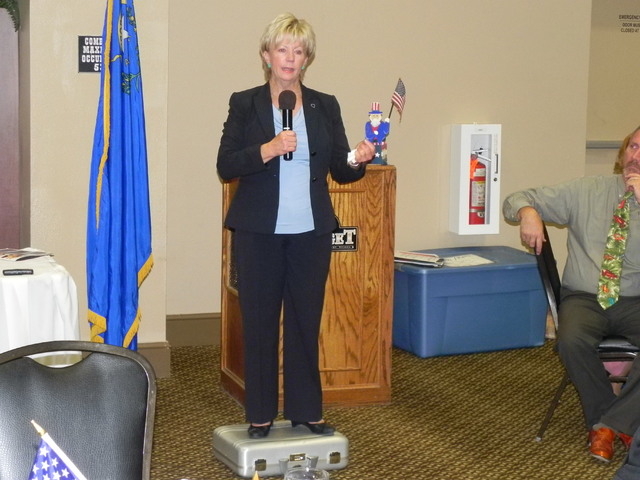 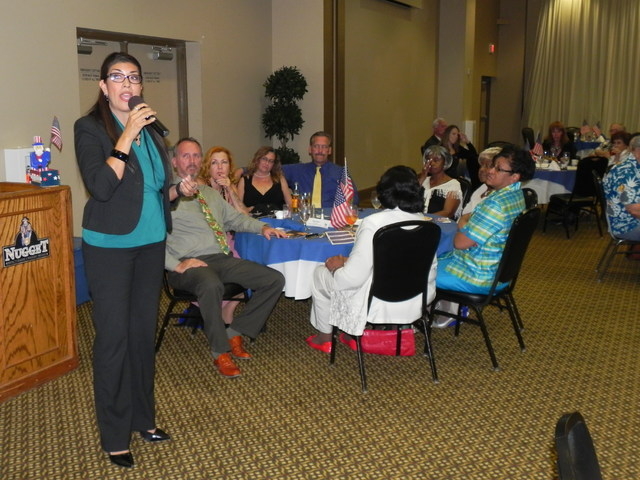 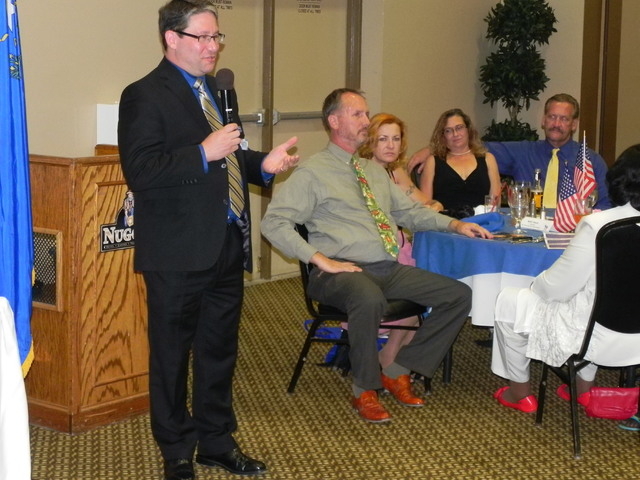 Democratic candidates for state treasurer and controller both emphasized their qualifications as certified public accountants, while lieutenant governor candidate Lucy Flores brought up her tough upbringing, in speeches at the annual Jefferson-Jackson Dinner hosted by the Nye County Democratic Party at the Pahrump Nugget Hotel and Casino Friday night.

“We grew up very poor but it wasn’t until my mom left when I was 9 years old that I began to experience problems at school,” she said. “Without a support system at home I very quickly fell into the wrong crowd and began getting in lots of trouble and actually ended up on juvenile parole at 15 years old and was a high school dropout at 17.”

“Going through that process it wasn’t until someone took some time with me and invested some energy in me and allowed me to believe in myself that I was able to turn myself around and do something, stand before you tonight representing that district I grew up in as an attorney and as the first Hispanic woman ever elected to the state Legislature in the State of Nevada and help people, to give back instead of someone who, for much of my childhood was treated like a number, like someone who wasn’t worth the investment and I still see that. I see that so often in our school system now that is failing half of our kids. I see that in our kids who don’t have the opportunity to attend college because it is so expensive.”

Wallin said there are restrictions on investing state money, set by the board of finance made up of the governor, controller, treasurer and two appointed members. She wants to find a sustainable funding source for the Millennium Scholarship because students who go to college on that scholarship graduate at a much higher rate, adding an educated workforce is essential to Nevada business.

Wallin wants to continue Marshall’s good job returning unclaimed property; she also wants to expand on the Kick Start program where parents can start investing in their child’s college education.

State Assemblyman Andrew Martin, D-Las Vegas, who seeks to replace Wallin as controller, said he’s the only CPA running for controller. Martin said he was formerly a member of the Nevada Economic Forum and the Clark County School District Bond Oversight Committee.

Martin predicted he’ll give the crowd some “red meat” about his opponent, Republican Ron Knecht and he delivered.

“My opponent is running around this state, he thinks he can delegate the responsibilities of this position. Really? Delegate that for which you are elected for? He doesn’t believe you have to be a CPA to handle the state’s finances. Really? I’m not kidding. I’m not making this up,” Martin said. “My opponent also spent time in the state Legislature. Fortunately it was for one term. He was part of the infamous Mean 15. He’s proud of the fact that he held the Legislature hostage. He caused the tax increase he was seeking to avoid because he was unwilling to compromise.”

The Mean 15 were a group of 15 Republican assemblymen who held up a budget deal in the 2003 legislature until one of them, Assemblyman John Marvel, R-Battle Mountain, broke from the group and cast the pivotal vote for the agreement.

“We’re just two months out from a very important election and as I said the stakes couldn’t be higher. We’ve seen consequences of the Tea Party control of the House of Representatives and it is very scary. House Republicans continue to wage a reckless war on women that restricts access to contraception while continuing to do nothing on immigration reform and create a single job,” Lange said. By contrast, she said the Senate under Harry Reid passed a comprehensive, bipartisan immigration bill last summer.

“The Republican nominee for lieutenant governor, Mark Hutchison, is out of touch,” Lange said, calling him, “a partisan, legal attack dog who spent his career as a foot soldier for the big guys and the special interests. He tried to dilute minority representation in politics and he led the charge in Nevada to put private insurance companies back in charge of health care and to put us back in a time when being a woman was considered a pre-existing condition.”

Lange said Secretary of State Ross Miller protected the right to vote and stood up to shadowy third party groups that played fast and furious with Nevada election laws. She added, “the Republican candidate Barbara Cegavske has been in the Legislature for nearly two decades. In that time she has killed nearly every attempt at reforming ethics laws, tried to implement a discriminatory voter registration law in Nevada, tried to make English the official language of Nevada, opposed nearly every effort to increase funding for education in Nevada and has earned the nickname, and I quote, ‘menace to education in Nevada.’”