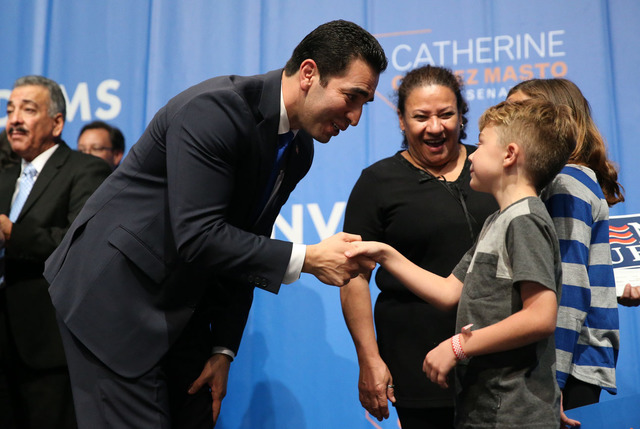 The two winners addressed the Nevada Democratic Party election party at the Aria casino on the night after the election.

“You should be very proud of what we did in Nevada today,” Cortez Masto said in her opening remarks at the Aria.

Cortez Masto said her victory was not just about making history, but about “ensuring we have a seat at the table to get something done.”

“There’s no doubt that we have to fight for an economy that works for all of us, we have to ensure we have a living wage, increasing that minimum wage for families struggling across this country, equal pay for equal work, paid family leave, and a future for our kids, and a public education system that is world-class that they can attain regardless of the zip code of the neighborhoods they come from,” she said.

She also promised to fight for passage of the comprehensive immigration act. “It’s not my voice that I’m taking to Washington, it’s our voice,” she said.

Cortez Masto will replace the outgoing Harry Reid. A number of outside groups poured money into the one of the most closely-watched in the country as it presented a rare opportunity for Republicans to control the Senate.

Heck outperformed Cortez Masto in all of Nevada’s counties, except for Clark County where Cortez Masto won 385,165 votes compared to Heck’s 303,316 votes.

The 36-year-old Kihuen, also a Democrat, defeated first-term incumbent Cresent Hardy in the race for the 4th Congressional District. The freshman Republican congressman claimed 44.5 percent of the vote, while Kihuen had close to 49 percent of the vote.

“I am humbled by this opportunity to serve the people of the 4th District, Kihuen said. “When my family came to America 28 years ago with nothing, we never imagined the day where I would be elected to the United States House of Representatives. In January I’ll go to Washington to work to improve this country for the people I’ve been elected to represent.”

Kihuen was elected to the state Assembly in 2006 and served two terms before running for the state senate in 2010. He has also served as majority whip for the Democrats in the Senate in the 77th legislative session.

“I had the opportunity to serve with Congressman Hardy in the state Legislature and I know that he is a good man,” Kihuen said about his opponent.

Kihuen, who made raising the minimum wage and affordable college one of his main campaign points, promised his supporters to fight for “the American Dream.”

“Congress is broken. For too long we’ve seen partisan differences threaten the ability of working class people to achieve the American Dream. We, like all Americans, dream of a good education, a good-paying job, to own our own car, our own home, that our kids will breathe clean air and grow up on safe streets,” Kihuen said.