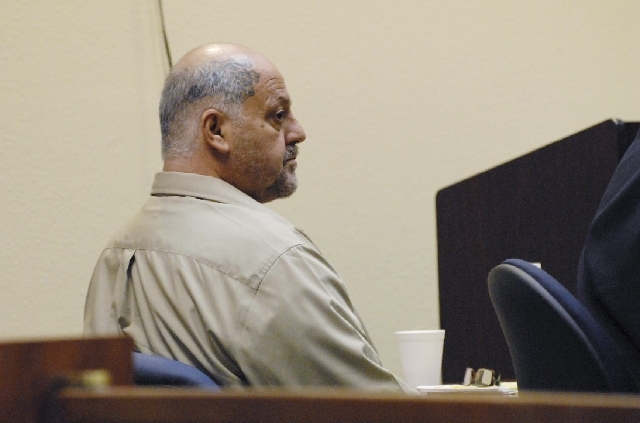 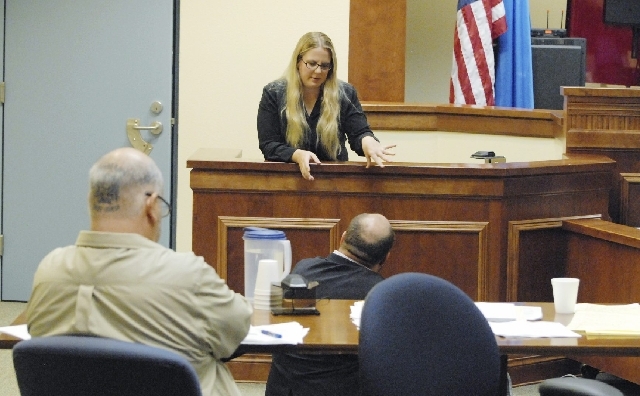 Testimony in the trial of a man involved in a June 2012 shootout with two Nye County Sheriff’s deputies on Manse Road continued this week as officers involved testified about their roles in the case.

Edward Garza, a member of the Hessians Motorcycle Club, is on trial for charges of attempted murder with use of a deadly weapon, assault with a deadly weapon, aiming a firearm at a human being or discharging a firearm where a person might be endangered and carrying a concealed weapon following a June 30, 2012 incident in the front yard of his 4790 E. Manse Road home.

According to police reports, Deputy Summer Dannecker and Deputy Wesley Fancher arrived at the address for a report of a domestic dispute with possible shots fired.

Dannecker arrived first and less than a minute later Fancher arrived at the home as well.

Garza was reportedly sitting in a chair near the front gate of the property with two guns, a .32 caliber Cobra and a .45 caliber Llama sitting by his feet.

As Fancher began to approach Garza, Dannecker reportedly told the defendant to stand up and show them his hands, at which time he allegedly pulled up the .45 caliber firearm in his right hand and pointed it at Fancher.

Fancher fired a single round at the other man before Garza fired back and a gun battle ensued.

He was then transported to the trauma center at University Medical Center in Las Vegas to be treated for his injuries. Several days later he was released to the sheriff’s office and booked into custody, where he has remained ever since.

The defense in Garza’s trial is that he acted in self-defense, firing his weapon at the ground to buy himself time to take cover after Fancher fired at him first. They say he didn’t pick the gun up and aim it at the deputy, but rather tried to show police both his hands and what weapon he had on him per their commands.

Both deputies involved, however, testified this week that neither of them saw the man pointing the gun at the ground.

Fancher took the stand Thursday morning to give his account of the incident on the day in question.

The deputy, only 19 months into the job at the time, said he arrived to the possible shots fired call and immediately got out of his vehicle, retrieved his gun, keeping it at his side with the barrel pointed down. The officer said he then began walking toward Garza to speak with him, as Dannecker was already speaking with a woman on the property.

Before he could get close enough to converse with Garza, however, Fancher said he heard Dannecker give the defendant a command to stand up and show his hands.

Fancher said he didn’t immediately see any weapons on Garza as he approached, but quickly realized the man had grabbed a gun as he stood up with what was later identified as the .45 caliber Llama in his right hand.

“As soon as Deputy Dannecker gave him the command, he looked over at Dannecker, that’s when I stopped walking. Something didn’t feel right. He immediately reached down really fast and stood up. He came up with something, I didn’t know what the object was at first and fumbled with it and caught it again right about at his hip height. That’s when I was able to confirm that’s a gun. When he finally got a hold of it, he went to raise it toward my direction and that’s when I fired my first round,” the deputy testified.

“After the first round was fired he brought both arms into his chest immediately. I don’t know if he thought he was shot or he was shot, I wasn’t sure. There was a fraction of a second where I was done, I didn’t know where it was going to go from there. I thought maybe he was done, I didn’t know what was going to happen. But that was when he was able to apply both hands on the gun and immediately engaged in a gun- fight,” he said.

When asked what the deputy was thinking as he and Garza exchanged gunfire, Fancher said he just wanted the other man to stop shooting.

“I was sure that I was shot, I could feel the blood running into my boots, but it wasn’t until Deputy Dannecker asked me if I had been shot, I told her no, but I didn’t look, I was afraid to look down. I didn’t know how I would react if I did. Later I found out it was the sun beating off my black boots, but for some reason my brain told me that was what it was. I don’t know why. But I wasn’t shot,” he later added.

Despite defense attorney Jason Earnest’s opening argument that Garza was not in fact trying to shoot at the deputies, but rather at the ground, Fancher testified the gun was pointed upward toward the deputy’s upper body, not down.

Dannecker also testified she too was afraid the defendant would shoot her during the ordeal as she tried to protect both the female and herself.

“I said that I was pretty close to him and he was actually looking at me,” she said about her testimony during the preliminary hearing in the case.

The officer further testified that once Garza had been shot and fell to the ground, she saw him attempt to sit up and reach in the direction of the gun.

When asked by Earnest why that specific detail was in neither her report from the incident nor her subsequent interviews with detectives, she said she believed she had mentioned it during her interviews, but admitted it was not in her report.

Earnest went on to question Fancher about why he didn’t yell to his client first to announce his intentions before approaching with his gun in hand.

The deputy answered the situation didn’t call for him to yell at the defendant and he wanted to be within normal speaking distance before talking to Garza about why police had been called to the residence.

When asked if Garza had at any time pointed his gun at either his girlfriend or Dannecker, Fancher replied he did not see Garza point the gun at anyone but him.

Though the defense has claimed the situation was calm and peaceful until Fancher arrived with his gun out of his holster, Greg Seidel, a consultant with Virginia-based law firm Thomas & Burns, who has expertise in use of force cases, said in his professional opinion he believed the officers’ actions were “reasonable and appropriate under the circumstances.”

In the midst of the state witnesses’ testimonies, Earnest and Chief Deputy District Attorney Kirk Vitto argued over multiple pieces of evidence the state wanted to submit as part of the trial, including photographs and footage from another deputy’s patrol car that arrived on scene after the shooting. They discussed with the presiding judge, Robert Lane, whether the items were appropriate to show to the jury.

Some of those items included photographs of the inside of Garza’s home, which depicted Hessians Motorcycle Club décor, a Nazi flag and possible drug paraphernalia. One photo captured a marijuana roach in an ashtray.

Earnest told the judge he wanted to keep the case clean and not contaminate the jury by showing them images that could shade their impressions. He said he wanted the case to be tried on the merits of the situation, and not based on his client’s choice to associate with certain organizations.

Some pieces have been kept out of the trial based on those concerns, while others the judge deemed not prejudicial were allowed in.

The trial was expected to continue through today as the state continued its case before the defense was set to put on its case for the jurors. It remained unclear if Garza was set to testify on his own behalf.