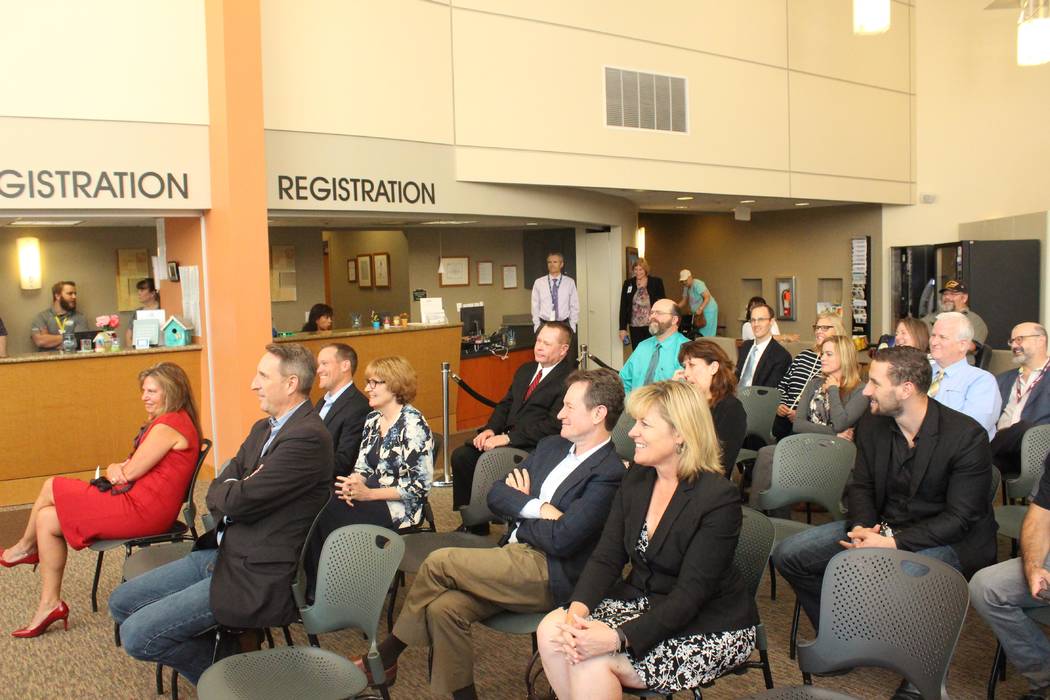 Jeffrey Meehan/Pahrump Valley Times Executives from Desert View Hospital were joined by representatives of Switch, Nevada Hospital Association and others to announce the hospital's new fiber-optic connection on Sept. 18, 2017. The Nevada Broadband Telemedicine Initiative occurred as part of a federal grant and collaboration the Nevada Hospital Association and Switch and the state's utility providers. 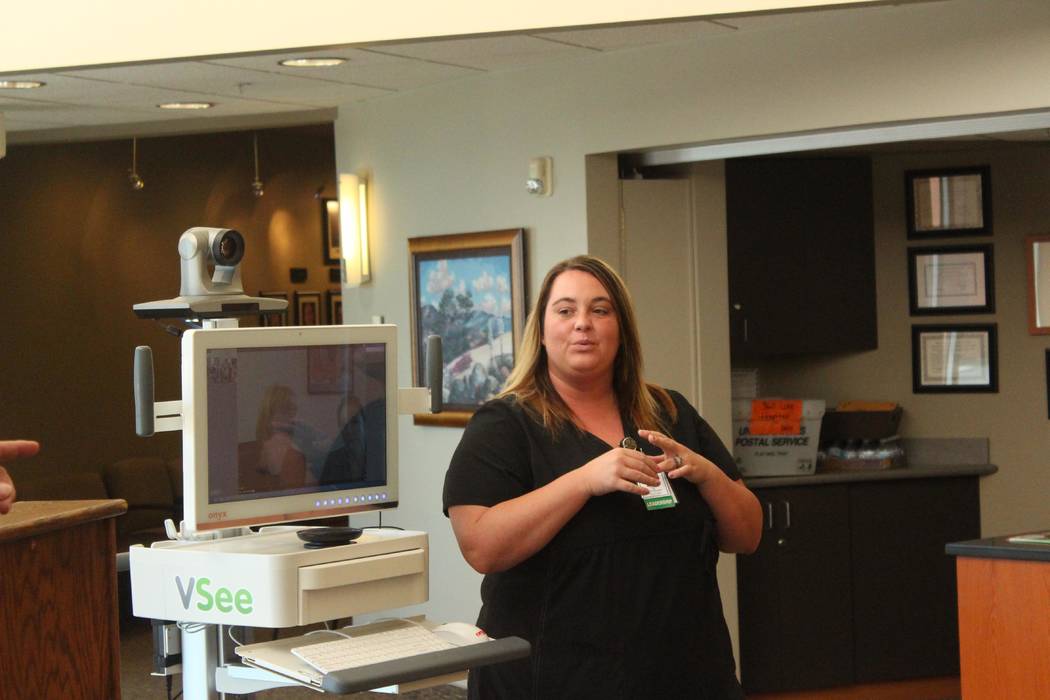 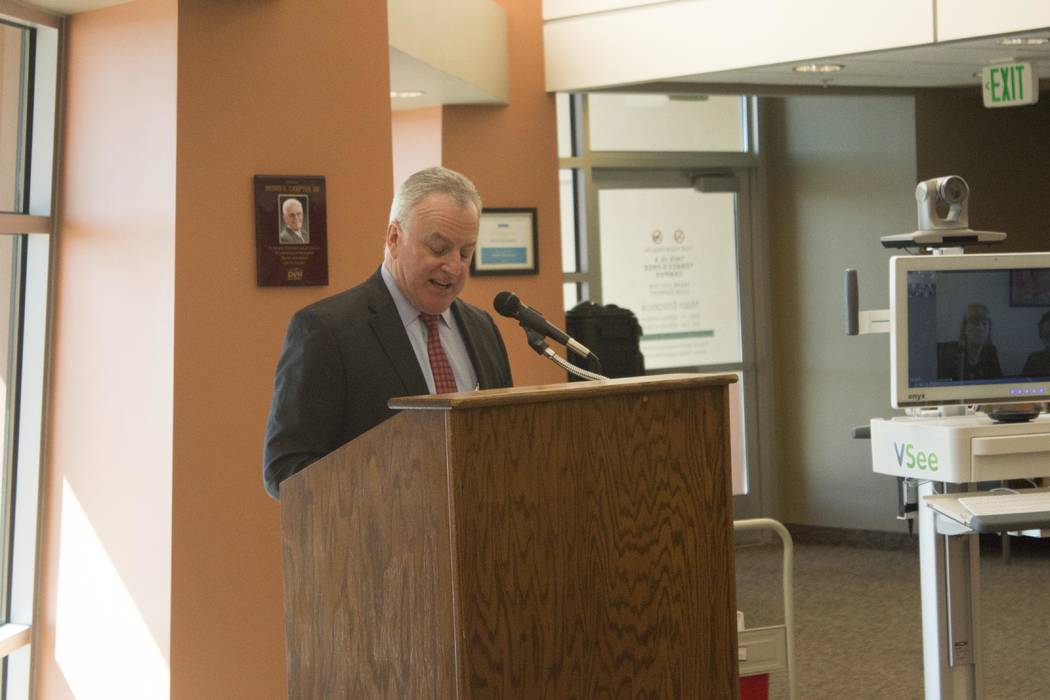 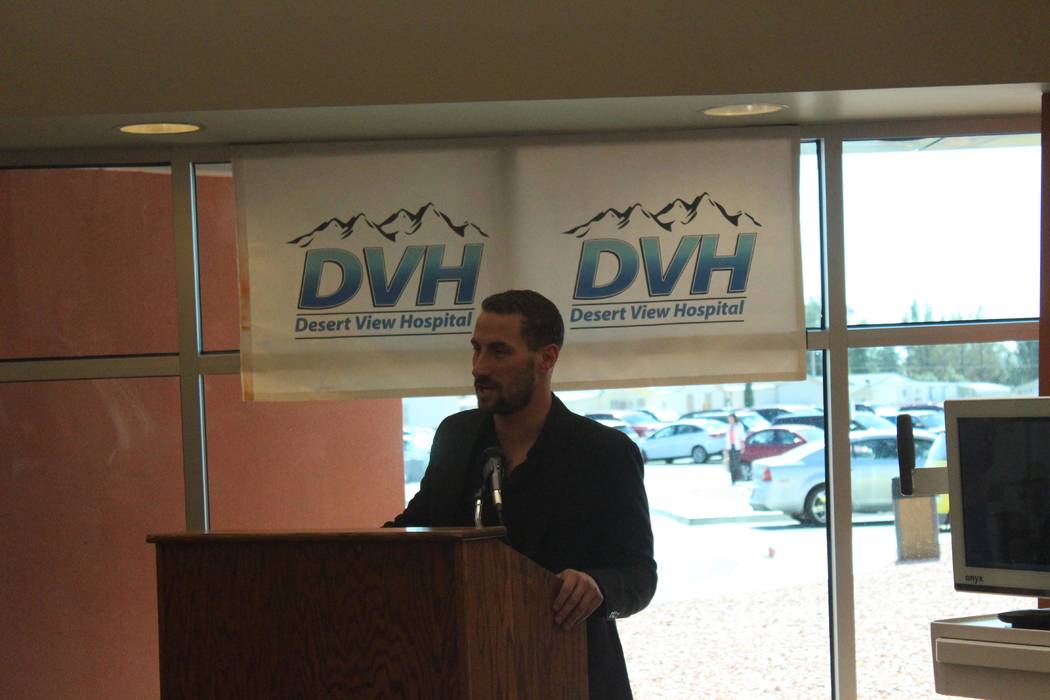 Jeffrey Meehan/Pahrump Valley Times Adam Kramer, executive vice president of strategy at Switch, speaks about the company's collaboration with the Nevada Hospital Association at Desert View Hospital on Sept. 18, 2017. The partnership led to Desert View getting connected to a fiber-optic network.

Desert View Hospital was one of several medical facilities across Nevada to gain access to fiber-optic communication lines, which offer facilities the potential to benefit a patient’s access and speed of medical care.

The advancement was announced in the fall of 2017.

Robert Freymuller, CEO of Summerlin Hospital Medical Center and board chairman of the Nevada Hospital Association, announced the completion of its Nevada Broadband Telemedicine Initiative at Desert View Hospital on Sept. 18, 2017 during an official ribbon-cutting event.

The initiative, covered by a $19.6 million federal grant, came together through a statewide collaborative effort between such partners as Switch, Valley Electric Association and Nevada Hospital Association. Members of these organizations and other medical groups in Nevada, along with state and local leaders, and others attended the event.

The result of the efforts by the association and its partners has brought fiber-optic communication lines to Northern and Southern Nevada’s hospitals, health care facilities, nonprofits, government agencies and others.

“This initiative will provide a foundation for economic growth, the creation of delivery of technology services to both rural and metro Nevada for decades to come, so this is a really monumental, exciting project,” Freymuller said.

The funding for the project came through a federal grant from the National Telecommunications and Information Administration (NTIA), which sits under the U.S. Department of Commerce. That agency’s funding came from the American Recovery and Re-investment Act of 2009.

The Nevada Hospital Association, a not-for-profit statewide professional association, received its several millions of dollars in grant money in 2010 and collaborated with Switch in 2016 on the completion of the project.

Switch has laid more than 450 miles of fiber-optic lines between Las Vegas and Reno in the state. On top of that, the initiative succeeded in the construction of 224 new miles of fiber network while utilizing Switch’s network already in place.

Nevada has 14 connected hospitals across the state, including in the Las Vegas and Reno area. The system can transfer information at speeds up to 1 gigabit per second, according to information from NTIA’s website.

Adam Kramer, executive vice president of strategy at Switch, sees potential for the state in health care and other sectors.

“It really creates a network that is going to create enhanced services, not just to hospitals, schools and the government agencies, but to every citizen here in the state,” he said. “It will really help us move forward in becoming the smartest city in the country, something that we’re very excited about.”

What it means for Desert View

The upgrade is good news for patients at Desert View Hospital.

Communications with doctors outside of the Pahrump area has already been happening at the hospital using its current broadband connections for the past couple of years. Those initiatives have been successful with psychiatric patients that were evaluated via an electronic medium.

This has led to the reduction of the number of patients sent off to state mental hospitals, said Assemblyman James Oscarson, who is also the director of community relations at Desert View, at that time.

Telemedicine initiatives inside the hospital can also lead to speeding the process up for patients receiving scans, such as MRI, CT scan or an X-ray.

Susan Davila, CEO of Desert View Hospital, said scans sent on the facility’s previous connection speed could take up to two hours to reach a technician in Las Vegas. With the fiber connection, it can take less than 30 minutes.