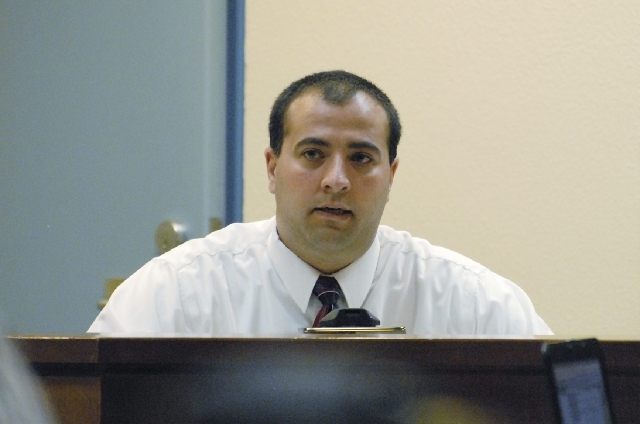 A criminal investigation targeting a high-profile sheriff’s detective is underway after a local attorney told Nye County Sheriff’s authorities that a female client was coerced and subjected to lewd behavior by the deputy.

Det. David Boruchowitz was made aware of the complaint — though he says not the specific allegations against him — and ordered to stay away from Tom Gibson, a public defender, the lawyer’s 24-year-old client, Antionette Bell, as well as the attorney’s wife, a school district employee.

Tom Gibson, who has a county contract to provide indigent legal defense services, filed the complaint after Bell told him she was forced by the detective several weeks ago to report a grievance with the school district against Gibson’s wife, an occupational therapist. Bell said Boruchowitz threatened her with arrest if she refused his demand.

An affidavit signed by Bell and produced by another local attorney on her behalf was obtained by the Pahrump Valley Times. It states that on Aug. 16, Bell went to the school district’s main office and reported that Louise Gibson had told her that Boruchowitz had a disabled son whose records she oversees. The affidavit goes on to say that this was a false report, that Louise Gibson never said any such thing and that in fact Boruchowitz coached her on what to say and how to file the complaint.

“He told me that if I did not do this report he would bring criminal charges against me,” the affidavit states.

Bell wasn’t the only person to make a complaint against the occupational therapist.

The letter, a copy of which was also obtained by the PVT, informed Louise Gibson that an investigation would commence after she responded to the allegations.

Louise Gibson said she could not comment about the complaint Bell filed against her because school district policy makes talking to the press a fireable offense. However, on the state board matter, she said it was simply not true.

It started when Tom Gibson provided his personal cell phone number to Bell. Bell repeatedly called the attorney and constantly texted him. His wife grew suspicious of the sudden closeness between the two. In fact, an anonymous phone call to the PVT about the lawyer suggested that a sexual relationship between the two was taking place. Louise Gibson had her own suspicions and confronted her husband. At one point, she even grabbed a few of his business suits and dropped them on Bell’s lawn during a dispute. She also told Bell that if the younger woman didn’t stay away from her husband she’d call police on her, particularly David Boruchowitz — after all, Louise knew Boruchowitz personally from school as well as from serving as a witness in a controversial criminal case involving a principal and special education teacher three years earlier.

Later embarrassed, Louise Gibson says she retrieved her husband’s clothes and all three sat down and came to an understanding. Tom Gibson has repeatedly denied having any untoward relationship with Bell.

“There are no improprieties between Antionette and myself,” he said. He later dropped her as a public defender case, but has taken her on as a pro bono client.

Asked several times whether she engaged in an improper relationship with her attorney, Bell repeatedly denied that she had.

Louise Gibson says her husband simply made Antionette a promise that he’d help her clean up her life — Bell, sober today, readily admits drug abuse, physical abuse and a host of other problems that have plagued her since a very early age. She was nearly killed in 2011 when a man stabbed her multiple times in the neck, chest and back during a drug-fueled attack that claimed the life of Bell’s then-boyfriend. Ironically, both Bell and Boruchowitz testified at the sentencing hearing this week of the last suspect in that case.

“Tom is a very determined attorney. He was told by the DA’s office that he would never be able to help Antionette change. You do not challenge Tom Gibson in that way because he will go to the ends of the world for his clients because I’ve seen him do it before. He will do whatever it takes to help. That’s when he decided to make Antionette a special project,” Louise said.

The school therapist admits the attachment Bell suddenly displayed was startling at first, but today she is as committed as her husband in keeping Antionette out of trouble.

“She becomes very attached very quickly and that’s where all these rumors stemmed from in the first place,” she said.

The misunderstanding involving Boruchowitz, the Gibsons and Bell say, began because they believe the detective relied on a third-hand account of the July domestic dispute at Bell’s house.

The third-hand information happens to have originated from the mouth of a longtime confidential informant for the sheriff’s department. The woman, who will not be named here at the request of the sheriff’s office, is close to Bell and is used by multiple detectives both in drug investigations and other criminal probes throughout Pahrump. In fact, the woman listed how many cases she’s made — about 90 in all — during an unrelated preliminary hearing last week in Pahrump Justice Court.

How she is connected to Boruchowitz is so far unclear.

Reached by phone Wednesday, the informant refused to comment.

“I’m not talking about that. That’s all bullsh*t,” she said before hanging up.

Bell told the PVT that the informant was in fact a witness to a June criminal case brought against Bell’s mother involving trading sex with a minor for drugs or money. That case was pleaded down to lesser drug charges recently.

“I told (informant) about the discussion I had with Mr. and Mrs. Gibson, but there was no discussion of Det. Boruchowitz’s son,” Bell’s affidavit states. “(The informant) told me later that she told Det. Boruchowitz that I had told her that his son has (a disability).”

Tom Gibson and his wife said they were both perplexed why the detective, told this information, didn’t simply come to them and ask if it were true. In fact, Boruchowitz himself has never made it a secret that he has a disabled child — the detective has served as president of PDOP, an outreach nonprofit benefiting children with disabilities, for some time.

But he didn’t confront the Gibsons. Instead, he called Bell multiple times and began making alleged sexual advances toward her.

“I felt like that was not appropriate,” Bell said. “It was disrespectful.”

The detective allegedly revealed to Bell that he’d downloaded pornographic videos of her — evidence he’d ostensibly obtained during the recent pandering case against Bell’s mother — onto his phone and that he used them for sexual gratification, according to portions of the complaint filed against Boruchowitz and made available to the PVT.

Told of the allegations, the detective declined to comment.

“I can’t comment on it. I didn’t even know what the allegations were until you told me,” he said.

“For the record, we can’t comment on ongoing investigations. That investigation was turned over to an outside agency to do,” he said,

A source close to the investigation told the PVT that the state’s Department of Public Safety has accepted the case. That agency is planning to conduct both criminal and administrative investigations. One will look for violations of the law, the other violations of procedure.

Boruchowitz has been involved in a number of high-profile cases. He was arrested in 2010 by former District Attorney Bob Beckett, during a major political row that saw Beckett leave office before his term was finished. Boruchowitz has a civil case pending against the county in federal court over the arrest.

He earned a good deal of wrath from locals when he arrested four Pahrump elementary school educators, including a well-liked special education teacher, on multiple felony child abuse charges in 2010. Those felony charges turned into minor misdemeanors for two of the educators and the cases dropped against two others.

Boruchowitz is not just a detective. While he was once DeMeo’s pit bull, today he’s more of a thorn in the sheriff’s side. Boruchowitz is president of the Nye County Law Enforcement Association. One reason why the internal affairs department of his own agency can’t investigate Bell and the Gibsons’ complaint, not that it would anyway, is because under Boruchowitz, NCLEA has filed a number of grievances naming top police officials, including a sex discrimination complaint against the lieutenant who would normally lead any such probe.

But the detective is not the only player in this saga with baggage.

Bell’s is well documented in this newspaper’s archive. In fact, one local prosecutor this week told the PVT that she made such a bad witness in the 2011 knife attack that she survived that the case — open and shut in any other jurisdiction — was in jeopardy of being lost because of her.

Tom Gibson is currently mired in a personal bankruptcy. His former practice, Gibson & Kuehn, broke up as a result of new changes in the county’s public defender contract, which has meant less money for the attorney. He also is mired in long-term litigation with an ex-wife. He was recently held in contempt of court by one of the two Pahrump justices of the peace for missing a hearing. His office was flooded during a recent rainstorm and he was forced to move. And, as if it couldn’t get worse, his secretary and wife, unbeknownst to him, recently told a District Court judge that he was on the verge of a nervous breakdown, or worse, if he didn’t take some time off.

“We are going through a lot of stress,” Louise said.