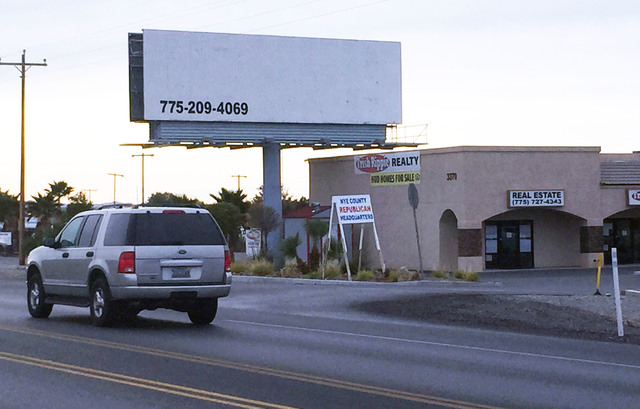 One man’s “visual blight” is another man’s income. That, according to Andy Jordan, who appeared before the Pahrump Valley Regional Planning Commission on Jan. 14 to appeal a December decision of the zoning administrator requiring the removal of billboard on his Route 160 property.

Removal of the billboard from his property was listed as a special condition for the reclassification of the property from “open use” to “highway frontage use” in February 2004. The property was then re-zoned in 2006 to “neighborhood commercial.”

Though Jordan said he agreed to remove the billboard in 2004 as part of the original zoning change and building permit approval, and then again in 2006, he told the planning commission that he did so under duress. He was fearful, he said, that if he didn’t agree to the condition that he would not be issued a building permit.

Jordan’s advocate Dan Simmons spoke at the meeting and asked the board to rescind the violation notice. Jordan, and others who advertise via billboard, Simmons claimed, generate between $3,000 and $4,000 per month in revenue from billboard sales.

Simmons alleged selective enforcement of the policy, which he claimed can not be enforced because it is not an ordinance. Resident Bob Howard, in turn, asked the commission why it continued to create unenforceable policies.

Community planner Cheryl Beeman told the board that though Jordan’s property was developed prior to the county’s master plan completion, that removal of the billboard adheres to plan direction which strives to eliminate “visual blight.” Billboards at two other locations, she told the commission, were successfully removed after a public hearing by invoking master plan policy.

“There was a significant amount of public discussion regarding visual blight caused by billbolards in the community. Our master plan has several goals, policies and objectives that addresses the systematic removal of billboards,” she said. Community input, she said, deemed billboards as a “sore spot.”

Simmons opined that public sentiment regarding billboards may have changed since 2003.

Chairman John Koenig said that though county code does not govern billboards, Jordan is not free from his obligation to remove the billboard. “My problem is he agreed to take it down,” Koenig said.

A suggestion from commission member Robert King for a one-year extension on the removal requirement was rebuffed by Jordan. To do that, Jordan said, would put him in the same position that he is in now. Commission member Gregory Hafen said that if billboards were going to be uniformly regulated, it should be done by the creation of an ordinance.

A 4 – 2 vote tabled the issue for 60 days to determine the number of other possible violators as well as to allow time for staff to draft an ordinance to “treat the issue globally.”