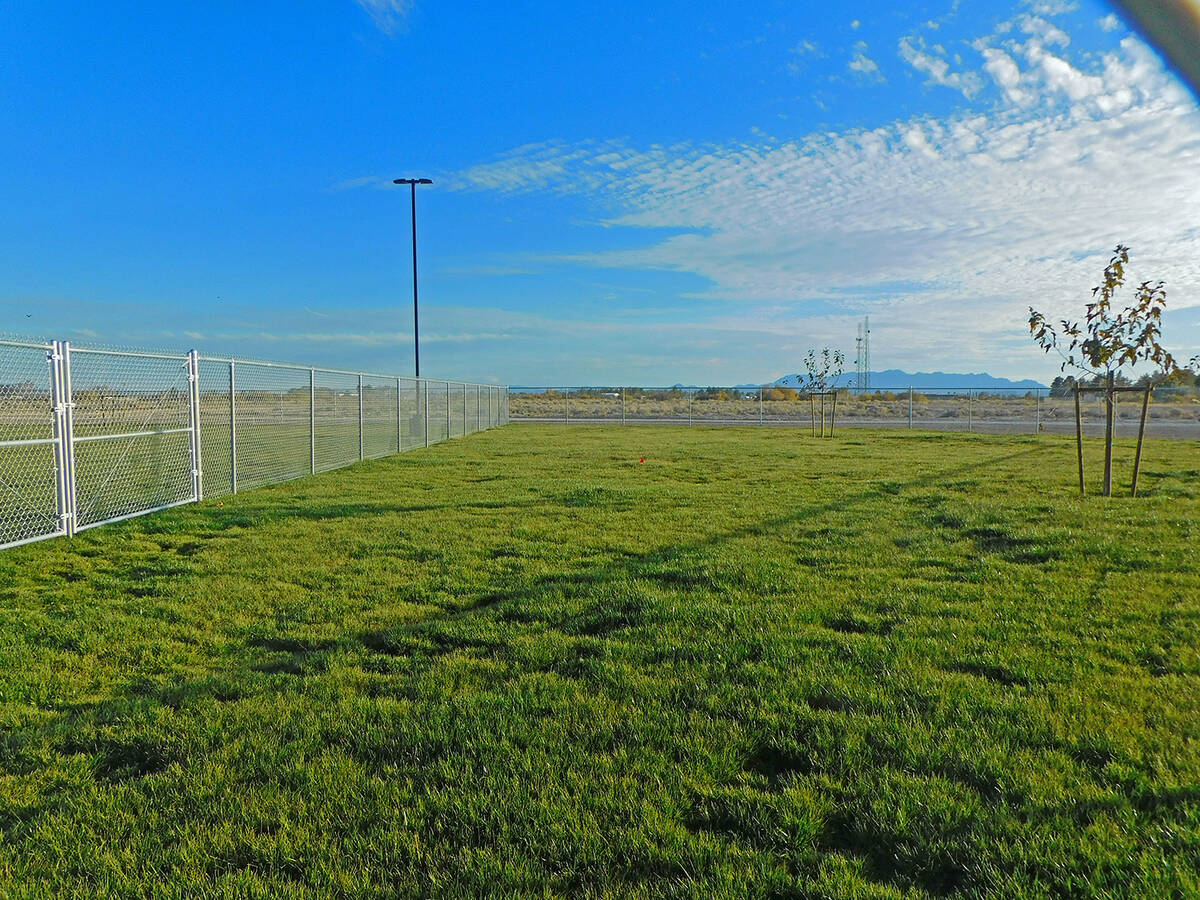 Robin Hebrock/Pahrump Valley Times This photo, taken Monday, Nov. 22, shows the grass that has been laid down for the Kellogg Park dog park, which has been divided into three sections to cater to different sized canines. Kellogg is not open to the public yet, as development continues to move forward. 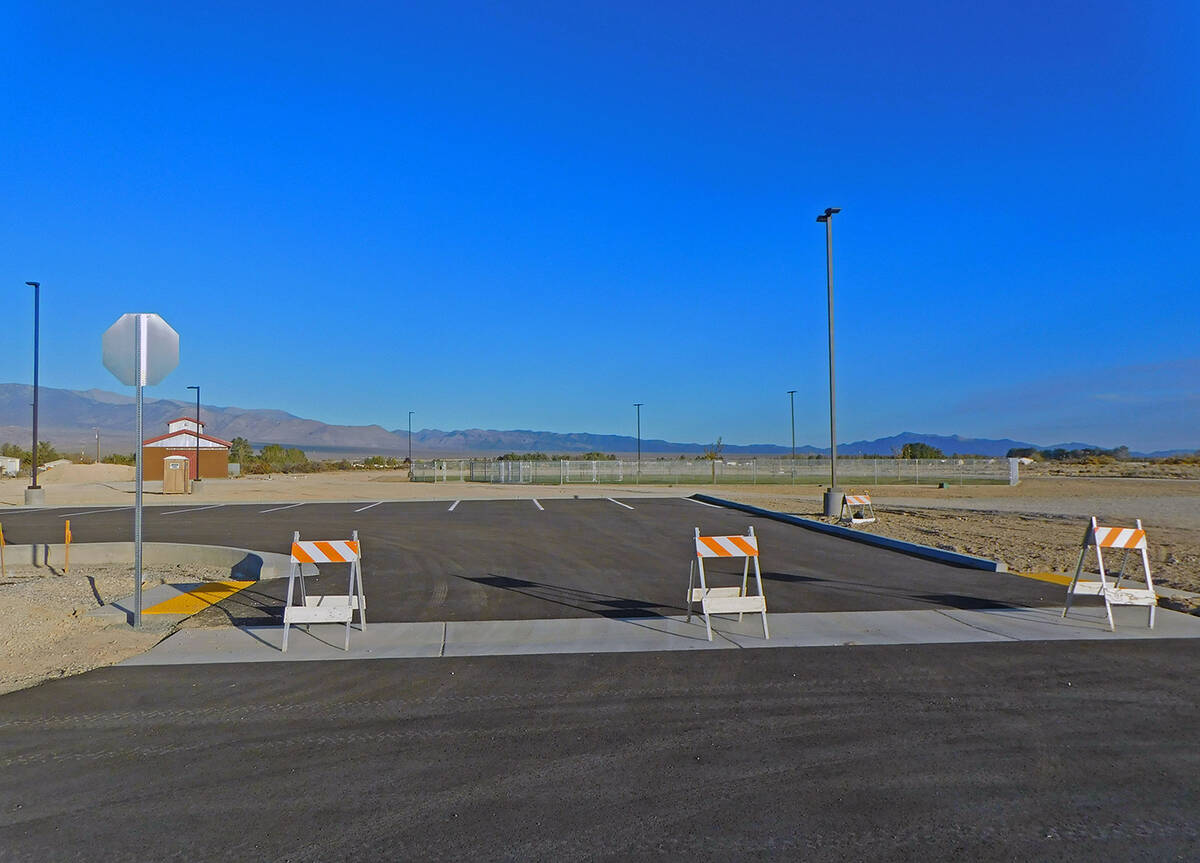 Robin Hebrock/Pahrump Valley Times As seen in this photo, the parking lot at Kellogg Park, now paved, has been blocked off as the park is not officially open to the public just yet. 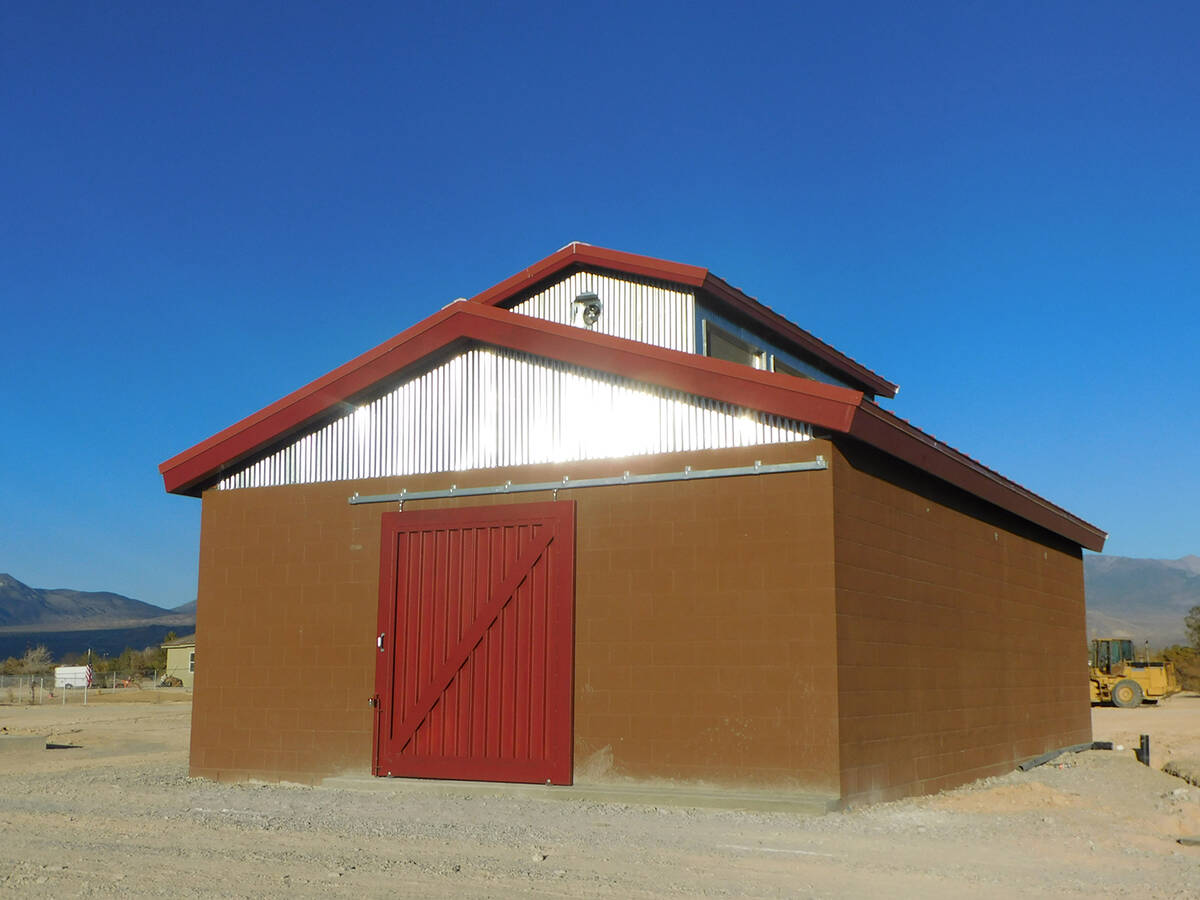 Kellogg Park was once nothing more than a dream, but it was certainly one that held on tenaciously in the minds of those who wanted to see it built.

The park was originally proposed around two decades ago when 80 acres of land were dedicated for the purpose and despite the fact that no real movement on the project was seen for so long, the concept of bringing that park to life never fell by the wayside.

Proponents of Kellogg Park continually pursued the project until it ultimate began to see some forward momentum, which began in May 2019 with a formal groundbreaking ceremony.

Now, more than two and a half years later, what was once a stretch of barren desert land has been totally transformed, with the first 18 of the earmarked 80 acres taking on the appearance of a true park-in-the-making.

To date, much has been accomplished at the site, with grubbing and grading completed by Wulfenstein Construction Co. in mid-2019 and lighting and electrical infrastructure installed by Industrial Light and Power as of March 2020.

This was quickly followed by concrete curbing and gutter work as well as construction of restroom facilities and on-site wastewater and sanitary sewer systems, all of which were handled by Morales Construction.

Next on the punch-list was the creation of a large dog park area separated into three distinct sections, one for small canines, another for medium sized dogs and a third for large breeds, and this was yet another contract that was awarded to Morales Construction.

Now this feature, too, has been finished, with fencing erected, gates in place and even grass laid down. However, as Nye County Public Information Officer Arnold Knightly emphasized, that doesn’t mean the park is quite ready for visitors.

“The Kellogg dog park is complete but it is not open to the public just yet,” Knightly told the Pahrump Valley Times, adding, “We are making sure the grass has time to take.”

There are several other aspects of the park’s development that will need to take place before Kellogg Park officially opens to the public and Knightly noted that the town is currently working on obtaining quotes for asphalting a portion of the walking path that will wind its way around the site and for concrete sidewalk work surrounding the parking lot and restroom.

Once that bidding process has concluded, a contract for that work will be awarded by the Nye County Commission, sitting as the governing body for the town of Pahrump.

As of the completion of the dog park area, a total of $1.81 million has been invested into Kellogg Park.