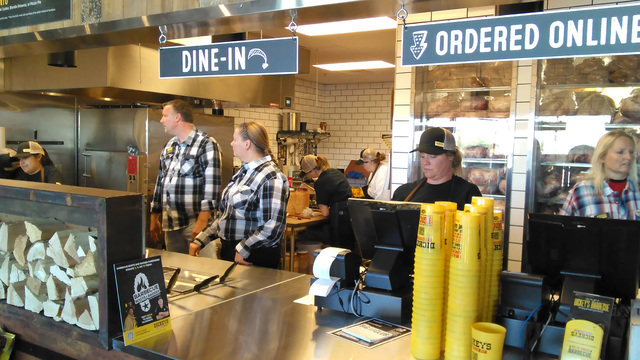 The grand opening for Pahrump’s newest eatery is set for Thursday.

Dickey’s Barbecue Pit first opened in Texas back in 1941.

At present, Dickey’s has more than 530 locations across 43 states.

“Currently we have 30 people on staff, which makes us one of the largest employers here in town,” he said. “We have a great group from 16 years of age all the way up to grandmothers.”

Additionally, the founder of Dickey’s Barbecue Pit will be present for the grand opening and will autograph his book about barbecuing for the first four dozen guests.

“We will start off the day with a ribbon-cutting ceremony attended by the founder, Mr. Dickey himself,” Dubin said. “He actually lives in Dallas, Texas, but he’s coming out here for our special grand opening.”

He and his family spent time in the heart of Texas learning the methods of creating what he describes as ‘mouth-watering’ barbecue from expert pit masters.

“We actually train everybody in the organization. My wife, my daughter and I actually spent an entire month in Texas, which is in the middle of barbecue country, learning the best of barbecue from the best barbecue pit masters there are.”

Additionally, Dubin said his barbecue, as well as the dining experience, will be second to none.

Brisket is smoked for roughly 14 hours before landing on the plate.

“The food is absolutely amazing and everybody here is going to have their turn at putting the meat in, taking it out and chopping it,” he said. “Most importantly, we are going to provide not only the best experience but the best food in Nye County. Our team will be providing the best experience for our guests as possible.”

From his travels, Dubin said there is great barbecue all around the county, but he believes Texas barbecue stands alone.

“Texas barbecue is known for being dry rubbed and smoked low and slow,” he said. “We smoke our brisket for 14 hours as well as the pork. It all comes out moist, tender and the flavor is amazing. It will be the best experience you’ve ever had.”

Part of that experience, Dubin said, focuses on customer convenience.

Dubin also said the new location is up and running. He’s already thinking about a second location in Pahrump.

“I am talking to an official at the Spring Mountain Motorsports Ranch and Country Club,” he said. “With the movie theater in the works over there, the sky is the limit. We have certain dollar amounts that we need to meet, but we are very excited about that development and I believe that will be our first choice for our second location.”

Regarding tomorrow’s grand opening, Dubin issued a challenge to the community.

“The grand opening will be at 11:00 in the morning and we certainly look forward to not only having everybody come out and enjoy our food, but we’re challenging the community to come out and fill the Albertsons parking lot. Everybody is excited about coming down and enjoying some of this great barbecue.”