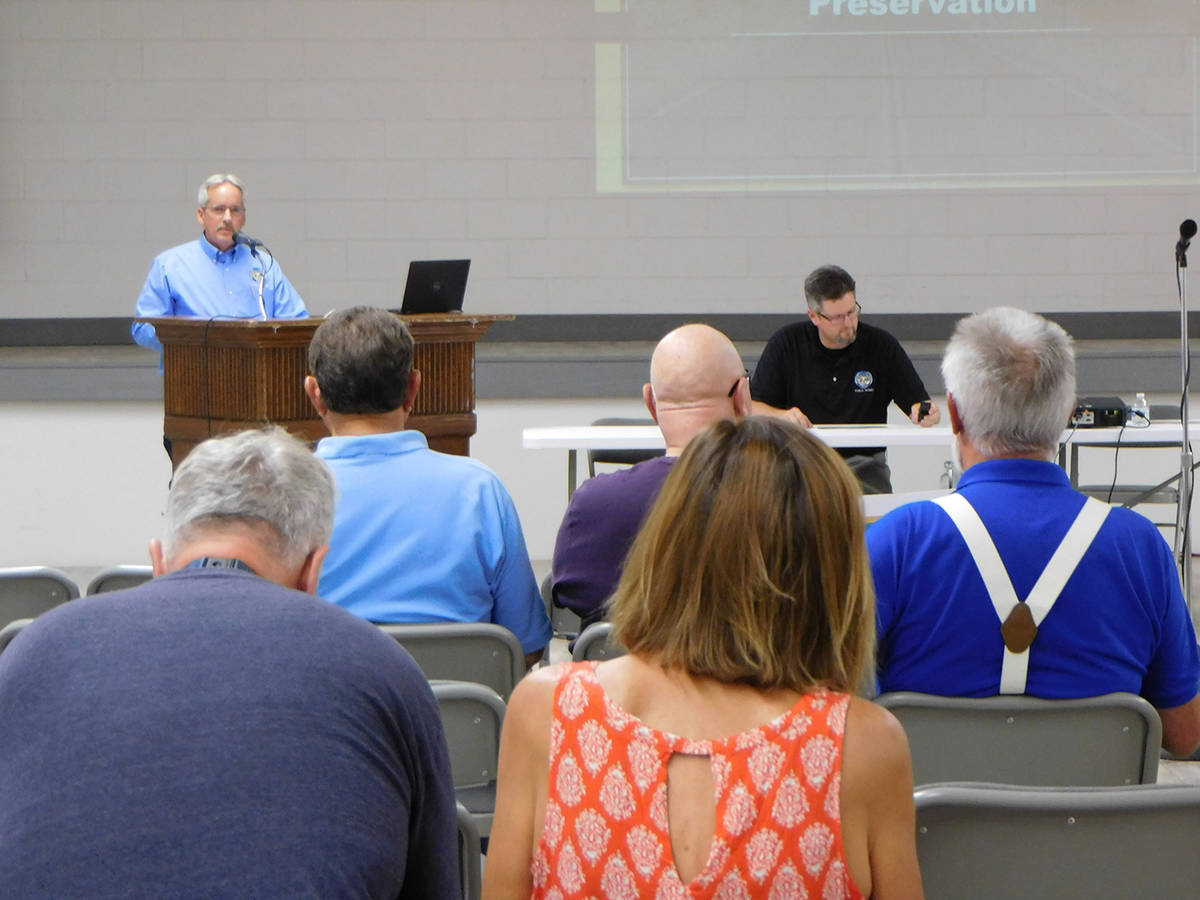 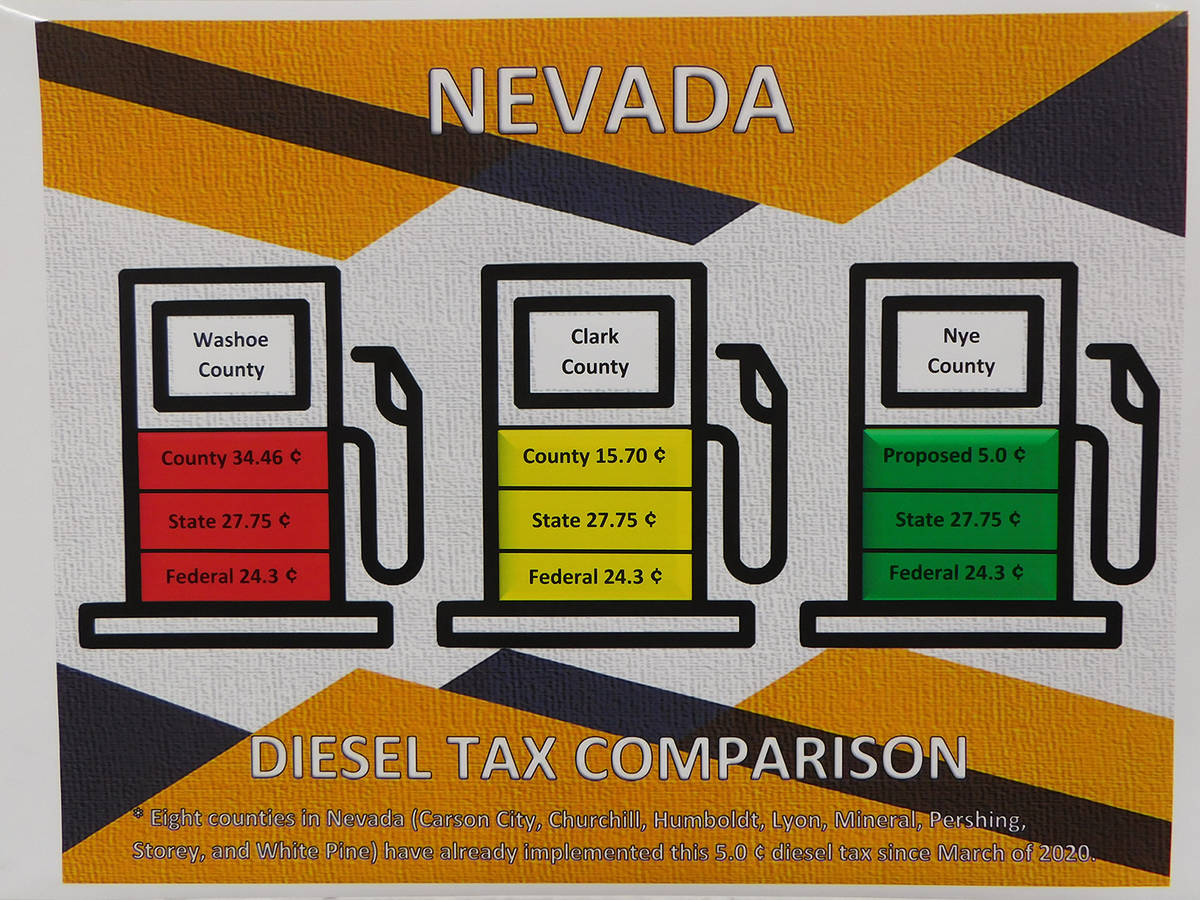 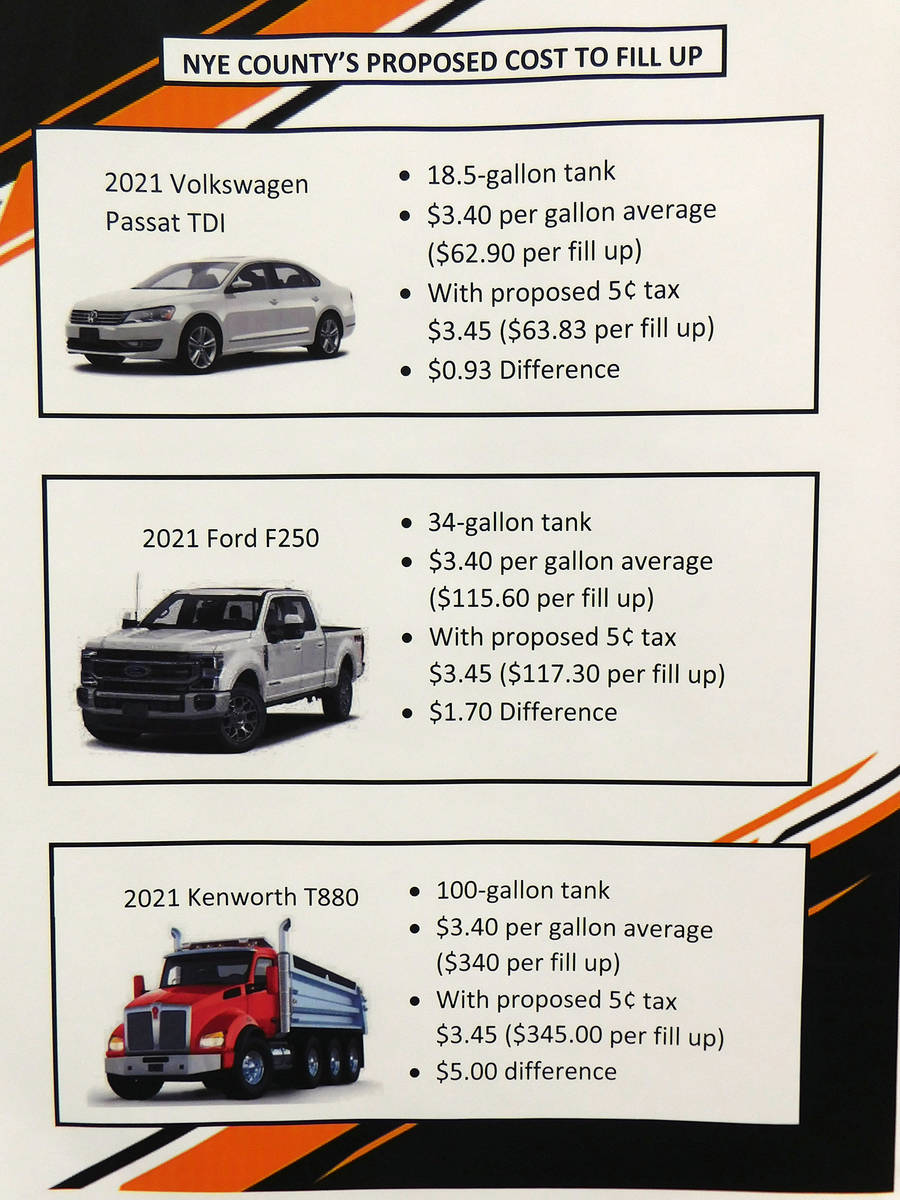 Robin Hebrock/Pahrump Valley Times This image gives residents an idea of what they might have to pay per fill-up in the event that Nye County does implement a five-cent diesel tax.

Road maintenance in Nye County, the third largest county in the United States, is a constant source of strain on the Nye County Public Works Department’s budget and in an attempt to ease some of this strain, the county is now considering the possibility of implementing a new local diesel fuel tax. As such, the county is hosting a series of workshops to give the public the chance to learn about the diesel tax proposal and pose questions, the first of which was held on Wednesday, July 14 at the Bob Ruud Community Center.

Nye County Public Works director Tim Dahl was joined by assistant public works director Thomas Bolling and engineering technician III Cody McKee for the presentation, and he offered a warm welcome to the roughly 20 attendees who had turned out Wednesday evening.

Dahl began by explaining that Nevada Revised Statute was recently adjusted to allow for a county commission in a county with a population of less than 100,000 to approve, by a two-thirds majority, the implementation of a five-cent diesel tax and the purpose of the workshop was to gauge the public’s opinion on this possibility. He then turned the presentation over to Bolling, who walked the group through a variety of slides detailing the county’s current budget, maintenance plans and needs.

Bolling started off by explaining that Nye County had contracted with a company called Lumos to create a maintenance schedule for its roadways. This was done by first analyzing pavement conditions and calculating future projections for those conditions as well as their associated costs of maintenance. Lumos then provided the county with maintenance treatment recommendations and suggestions for a Capital Improvement Plan on asphalt concrete, or AC, pavement roads in the county, of which there are approximately 641 miles.

The big takeaway from this process was that the average condition of the county’s AC roads fell into the “poor” category of the Pavement Condition Index, or PCI. “What that index does is, you gauge what deficiencies are in the road, whether it’s shedding or alligatoring or potholes, everything we see on our roadways. You guys see the cracks as you’re driving down the asphalt, that is due to the deterioration of the asphalt and we have to find a way to prolong the asphalt,” Bolling stated.

Breaking down the condition categories, Bolling said Nye County currently has a full 10% of its AC roads labeled as “failed” while another 15% are labeled as serious and 15% are labeled as very poor. “So 40% of our roads are very poor or worse in Nye County,” he emphasized, adding that those in the very poor, serious and failed categories are pretty much impossible to fix and need to be replaced. This does not include any state highways in the county or roads that are not AC, or asphalt concrete, such as gravel roads or those with only chip seal.

Moving on to the county’s maintenance options as outlined by Lumos, Bolling touched on three scenarios.

The first was a “do nothing” scenario in which the county performs very little maintenance and primarily responds to complaints. This would cause the county’s average PCI to drop even lower in just three years and would increase the deferred maintenance costs as well.

The second scenario focused on utilizing all of the public works department’s current budget of $4.25 million. Bolling explained that even with all of the budget going toward maintenance of the 641 miles of AC roads, the PCI would still see a decrease and deferred maintenance expenses would still rise, although not so much as would be seen under the “do nothing” scenario.

In order to maintain the current PCI rating, the third option presented by Lumos would be to budget $10 million per year toward maintenance. Bolling noted that this figure does not include any costs for new roads or improvement projects and only incorporates maintaining the current road conditions.

Outside of Lumos, the public works department created its own maintenance schedule, with costs for both AC roads, which should have a lifespan of 20 years, and chip seal roads, which have a life of about 15 years. With regular crack filling and fog sealing every three years and mill and overlay at the twentieth year for AC roads, and crack filling and fog sealing of chip seal roads every five years followed by new chip sealing at the fifteenth year, the costs of the maintenance plan would run abut $7.8 million per year. With a budget of just $4.25 million per year, the public works department falls far short of the needed funding to pursue this plan, and this does not allow for any road rebuilds, which would require even more funding.

Dahl then jumped in again to explain that the five-cent diesel tax proposal the county was eyeing could be implemented in one of two ways, either by a vote of the Nye County Commission or by placing the question on the ballot for voters to decide. It is unknown which direction the board might decide to take however, with Bolling noting that the same presentation made that evening would be given to the commission in August so board members could consider the matter.

One thing that workshop attendees seemed to be consternated about that evening was the fact that though people buying diesel fuel at gas stations in Nye County do pay taxes on their fuel purchases, not a single cent of that tax makes its way into Nye County’s coffers. Instead, all of the diesel tax paid in Nye County goes to the state or the federal government. A local diesel tax would ensure that at least some of those taxes come back to the county to use for its roads.

The implementation of a diesel tax would help to bridge a small portion of the public works budget gap, with estimates showing that a five-cent diesel tax would bring the county somewhere around $425,000 per year.

This is just a drop in the budgetary bucket, however and the public works department would still be several million dollars below what it needs to properly maintain the roads. Other options the county could look into to bring the department’s budget closer to its needs would be reinstating the local road property tax, allocating a portion of the local room tax to roads or increasing the current Nye County gasoline tax, which stands at nine cents per gallon today.

“These workshops are about you, the people,” Nye County Commissioner Leo Blundo, who has been a steady advocate for road improvements and who also sits as the chair of the Nye County Regional Transportation Commission, said following the workshop held July 14. “Public works is getting this information into your hands, taking questions, listening to your comments. We value the public’s thoughts and opinions. Thank you to everyone for taking the time to attend and be a part of the process.”

Blundo also took a moment to break down some financial figures to give residents and idea of what they might pay in the event that a five-cent diesel tax is instituted.

“If you Google semi truck average miles, it seems a standard is about 6.5 miles per gallon, while newer, nicer diesel trucks get between seven and 22 miles per gallon, depending on their load and how they drive,” Blundo said. He noted that he himself has been averaging about 22,000 miles per year in his Suburban, so he decided to use that number in his example. When calculating the math by dividing 22,000 by both seven and 22, then multiplying those products by five cents, he figured, “Worst-case scenario, people would be paying between $50 and $157 per year in additional diesel tax. And those numbers, at the end of the day, are still high because most people don’t drive 22,000 miles per year,” Blundo noted.