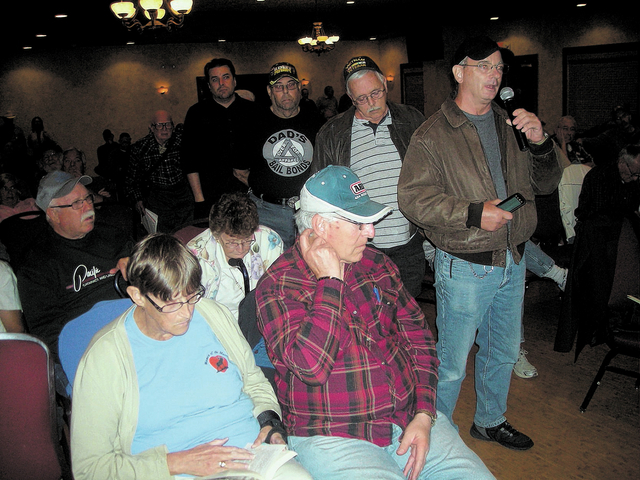 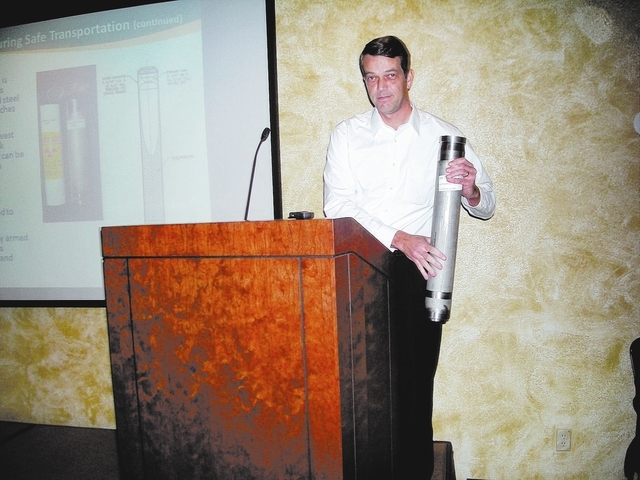 Two main questions were lobbed at U.S. Department of Energy officials Thursday about the proposed shipment of 403 canisters of uranium to the National Nuclear Security Site: Why is it classified low level nuclear waste and can you ship it through Amargosa Valley instead of Pahrump?

The DOE will be shipping 50 to 100 truckloads from Oak Ridge National Laboratory in Tennessee over a time frame of one and a half to three years to area five at the National Nuclear Security Site. The waste originated at the Nuclear Fuel Services Plant in West Valley, N.Y. in 1968 and later ended up at Oak Ridge. It is called the Consolidated Edison Uranium Solidification Project (CEUSP), it involved baking 8,000 liters of nuclear waste at 800 degrees for three hours to form a ceramic bonding inside each canister.

Frank Marcinowski, U.S. Department of Energy deputy assistant secretary for waste management, who fielded many of the questions from the 120 people gathered at the Nevada Treasure Resort Conference Room, said the DOE has been disposing of nuclear waste at the NNSS since 1961, so they have several decades of safe operations and trained personnel.

“The site conditions are ideal for housing a low level waste facility. It’s an arid environment, there’s very little rainfall, about five inches per year, there’s a high evapotranspiration rate, there is deep ground water, about 750 feet. So there’s really no groundwater pathway to transport the radionucleids at this facility to the accessible environment,” Marcinowski said.

Mark Whitney, director of environmental management at Oak Ridge, said 20 to 25 percent of the mass of the canisters is nuclear absorption material to prevent the material from reaching a critical mass for nuclear explosions. He said it’s not weapons grade material, if the canisters were opened they would generate a very high gamma radiation dose. Each canister, about two feet tall and four inches in diameter, will contain about 76 percent uranium 235, about 5.72 pounds worth, a little less than 10 percent will be uranium 233. The canisters will be inside containers 17 feet tall and 44 inches in diameter that weigh 24 tons when empty, with 5 3/4-inch lead shielding and over two inches of steel.

The DOE wouldn’t disclose the exact shipment routes for security reasons. Routes from the East are typically sent via Interstate 40 to Barstow, Calif., then up to I-15 to Baker, Calif., continuing on Highway 127 to Shoshone, Calif., east on Highway 372 to Pahrump and up Highway 160 to Highway 95, then to the NNSS, formerly known as the Nevada Test Site. The shipments will be protected by armed guards from the Office of Secure Transportation.

Pete Wallace said he drove from Shoshone, Calif., to Death Valley Junction, then over Highway 373 through Amargosa Valley to Highway 95 and the NNSS at Mercury and said it’s only 13 miles farther than driving through Pahrump.

“There’s virtually no traffic, very little population. It’s a 25-mile, straight as an arrow road. Coming through Pahrump there are four intersections that are notorious for traffic accidents including fatalities,” Wallace said.

DOE public affairs representative Al Stotts said the Office of Secure Transportation has been successfully shipping nuclear weapons, components and materials around the country for many decades with a low profile. He said intensive planning is done before any shipment, relying on a sophisticated, 24-hour communications center in Albuquerque that continuously updates convoys.

“It’s a perfectly reasonable thing to route the trucks through Amargosa Valley rather than Pahrump. Why refer to some mythical OST agency who we will never learn their reasoning or calculations?” asked George Tucker, who said he used to be a physics and chemistry teacher.

“The material is 76 percent uranium 235 and 10 percent uranium 233. I will point out that the material that went into the Hiroshima bomb was about that concentration of uranium 235. This by any definition of low level nuclear waste is not that, it’s weapons grade material,” Tucker said. “You have to put neutron absorption material in there to prevent criticality didn’t you say? You could have a meltdown of this stuff. I’ll point out also I think the concentration of uranium 235 in a low water reactor is no more than 5 percent.”

Marcinowski said if it’s neither high level waste, spent fuel, transuranic waste or byproduct material it’s classified low level nuclear waste. They are defined by how they are produced. Nye County consultant Mike Voegele said that was an “exclusionary classification.”

Voegele said in testimony before the Nuclear Regulatory Commission environmental impact statements people asked to take uranium isotopes out of the classification of low level nuclear waste. He said the uranium 235 has a half life of 740 million years.

“This stuff is going to be there for a long time, so I want to make sure there is some transparency in the studies by the DOE so we can have some confidence this is going to be safe,” Voegele said.

Voegele added long term studies didn’t take into account earthquakes and climate change. He said studies by the DOE showed the presence of young faults on the playa at Frenchman’s Flat that could be pathways for down water movement. Scott Wade, DOE assistant manager for environmental management, said the burials will take place in the alluvial fan 100 feet above Frenchman’s Flat.

Skip Campbell, who said he was a former professor of nuclear engineering at the U.S. Air Force Academy, predicted the canisters would have to be dug up and repackaged again. He wanted studies on the increased rates of cancer and birth defects in neighboring communities; Marcinowski said they didn’t do any epidemiological studies.

“A minute ago the gentleman said how safe this material is, then in the next sentence he said it would be off-loaded in robotic cranes so there wouldn’t be exposure to radiation,” Richard Goldstein said. “Nothing is 100 percent safe. Can you guarantee me if we have an accident none of this is going to leak out? Not one percent? I doubt it.”

Marcinowski said the canisters go through an extensive testing program before being certified by the Nuclear Regulatory Commission. That includes dropping them from a significant height. “This is an extremely robust cask so if there is something that should dislodge it from the trailer itself it is highly unlikely anything would leak from the cask itself,”he said.

Marcinowski said the DOE made 1,200 waste shipments last year to the NNSS. George Gingell wanted to know what Nye County would be getting out of this.

Nye County Commissioner Dan Schinhofen wanted a county representative on the governor’s working group on the shipments. Commissioner Frank Carbone wanted to know about the test wells for water.

“When you receive a canister from some other place are you sure what is in the canister is what’s supposed to be or are you just receiving the manifest?” asked Bill Davis, who said he worked at the Hanford, Wash. nuclear reservation for nine years.

Marcinowski said the waste would be verified at the site where it’s generated, Oak Ridge. He said waste being disposed at NNSS goes through a fairly rigorous process before it’s accepted for disposal, including reviews of the waste profile attended by state officials. Marcinowski said at the NNSS inspectors will ensure the shipping records are correct and take radioactive smears from the tractor, the trailer and the cask itself.

Marcinowski said the DOE has been disposing of low level nuclear waste at the NNSS since 1961. He said the NNSS has 1,200 truckloads of nuclear waste shipped there last year.

“I don’t know if they all came through Pahrump, but they all went to NNSS,” Marcinowski said.

Cles Saunders wanted to know if the waste can be shipped to some other state.

“Whether it’d be acceptable at any other state, the answer is no,” Marcinowski said. “There’s no commercial facility that’s able to accept this waste at this time, so NNSS is the only option available.”