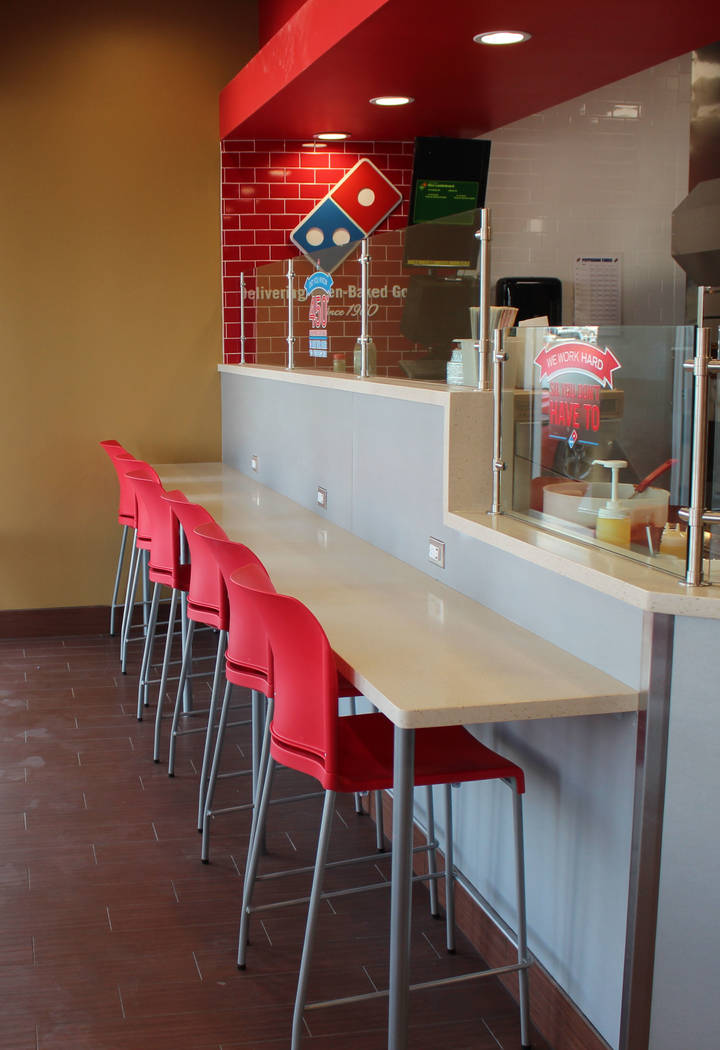 Jeffrey Meehan/ Pahrump Valley Times New seating at the redesigned Dominos Pizza at 250 Highway 160, Ste. 6, allows diners to have a place to hang out, grab some pizza and watch pizza get tossed. The relocation and upgrade of the Dominos in Pahrump is part of a national rebranding and design of restaurants around the globe. 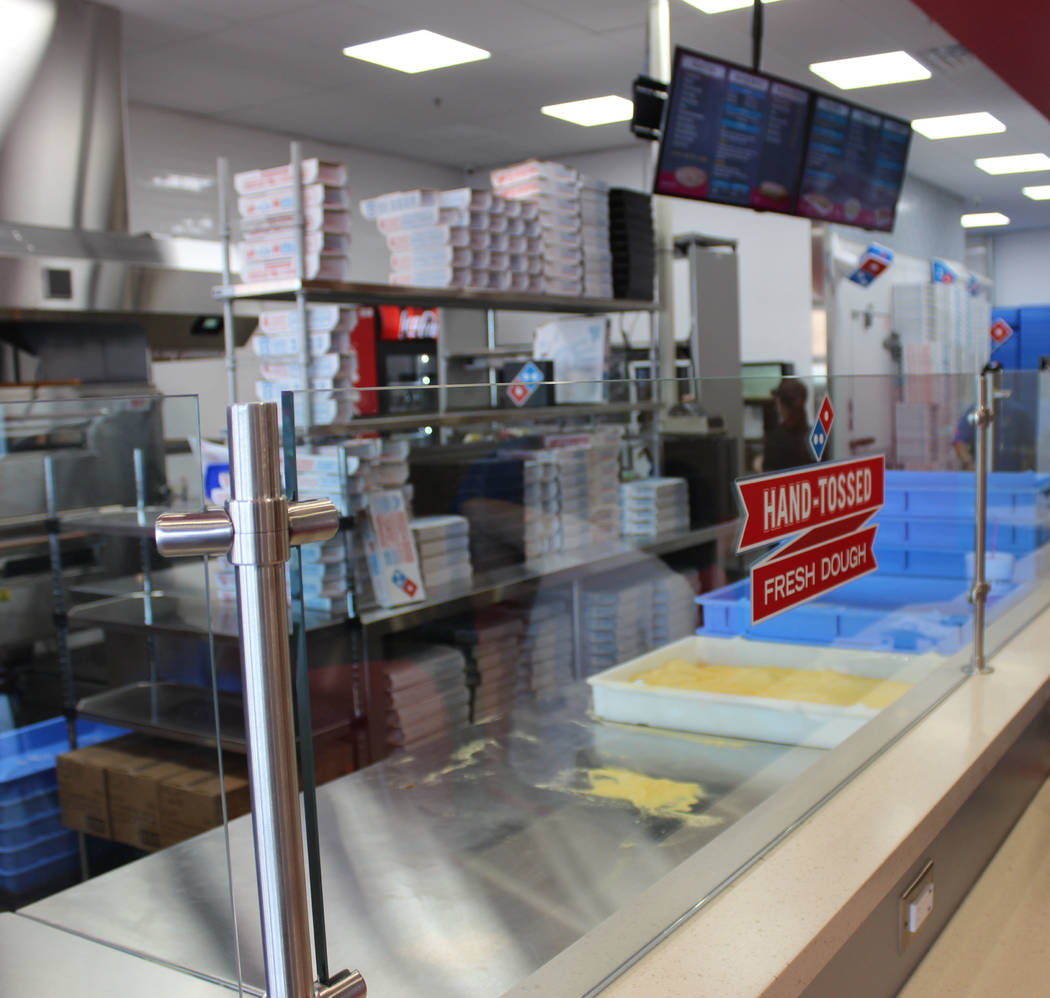 Jeffrey Meehan/ Pahrump Valley Times The viewing area at the redesigned Dominos Pizza at 250 Highway 160, Ste. 6, allows diners to have a place to hang out and catch the show at the new location at Pahrump Valley Junction shopping center, next to Albertsons. The store was previously at 421 S. Frontage Road and moved to the new spot on June 14. 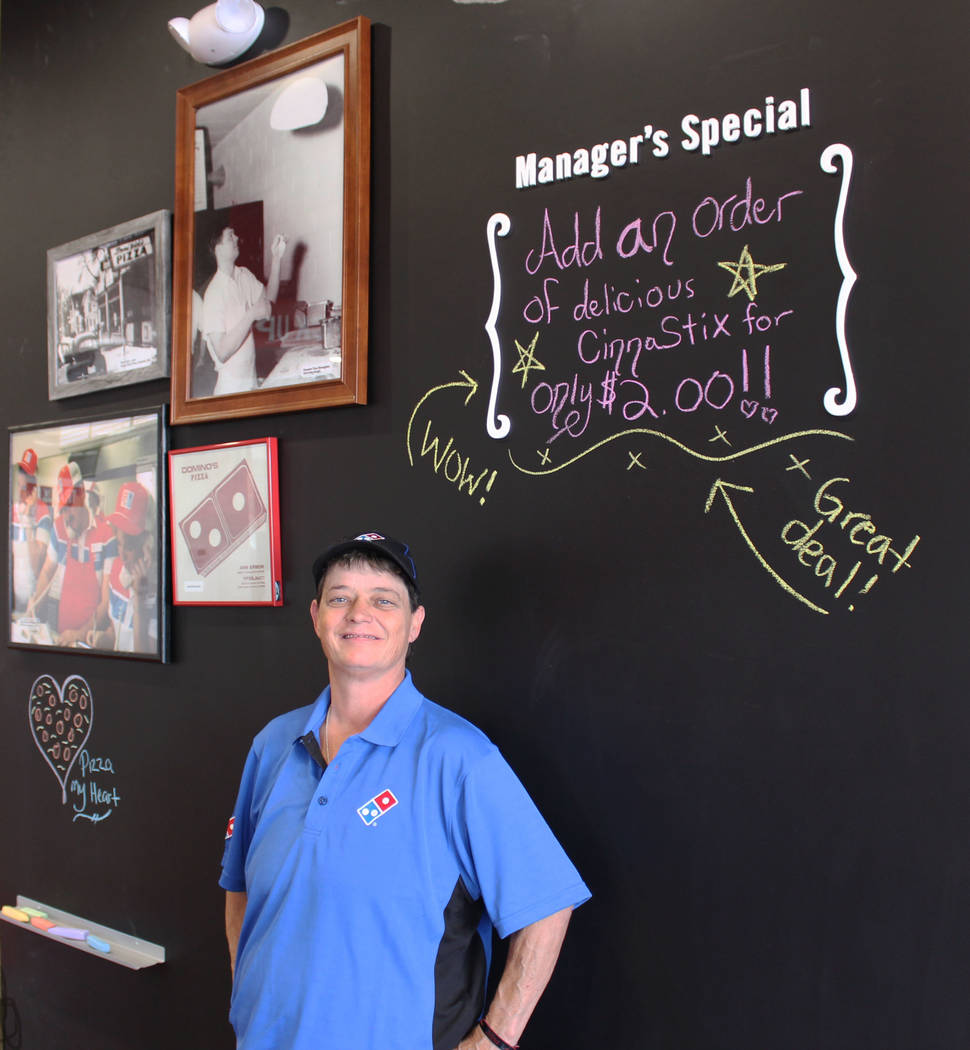 Jeffrey Meehan/ Pahrump Valley Times CJ Plunkett, general manager of Dominos Pizza in Pahrump, at 250 Highway 160, Ste. 6, stands for a photo in front of a chalk board where kids can get creative and be entertained on June 20, 2017. The board is just part of an expansion and redesign of the local store. 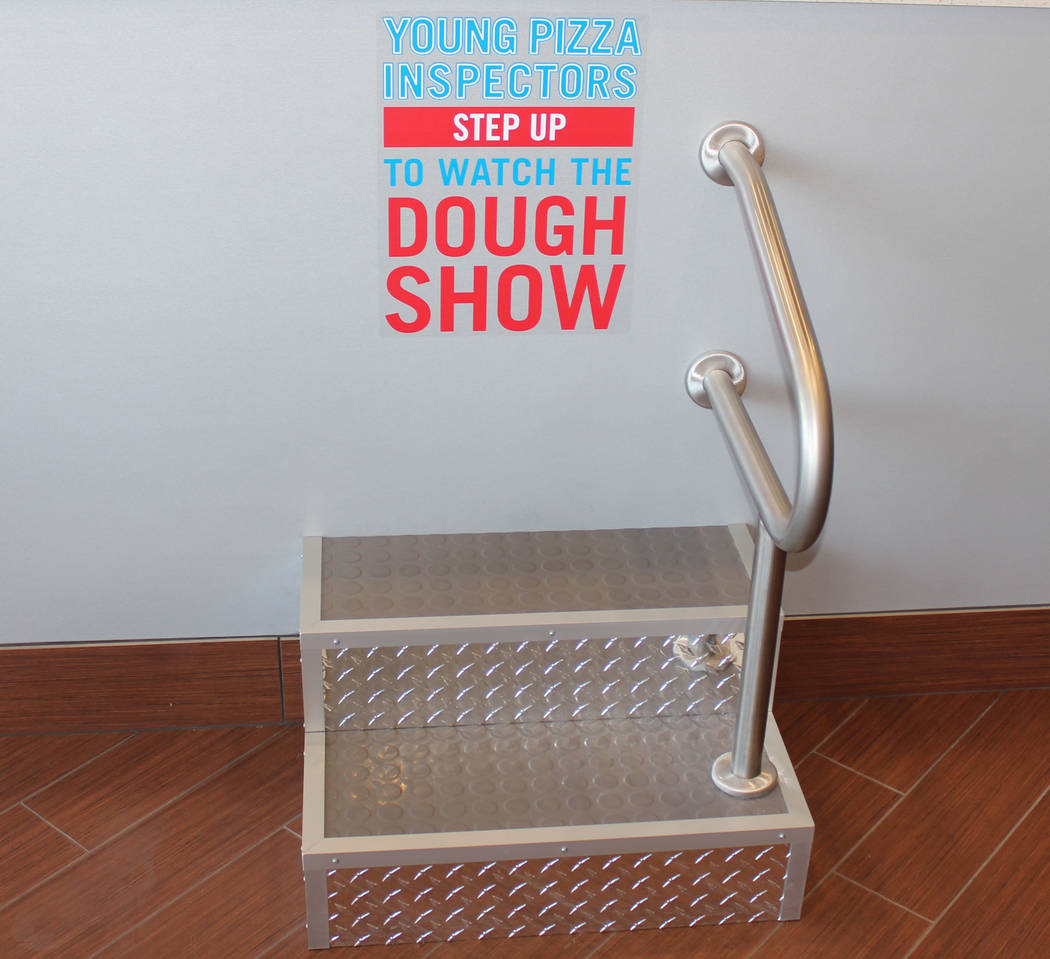 Jeffrey Meehan/ Pahrump Valley Times Kids can step up and watch the "dough show" at the Dominos Pizza at 350 Highway 160, Ste. 6. 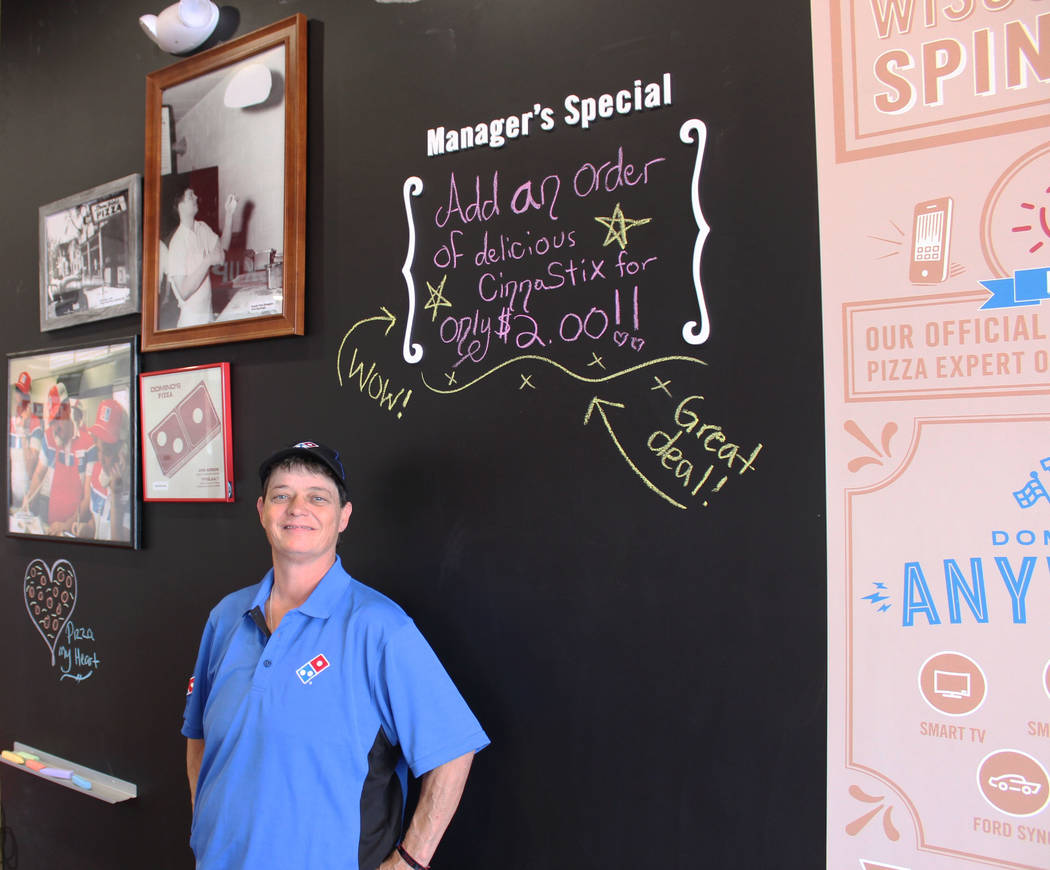 Jeffrey Meehan/ Pahrump Valley Times CJ Plunkett, general manager of Dominos Pizza in Pahrump, stands for a photo in front of a chalk board where kids can get creative and be entertained on June 20, 2017. The board is just part of an expansion and redesign of the local store.

A local Domino’s Pizza operation has ushered in a source of entertainment with its relocation and expansion efforts.

The single Domino’s Pizza restaurant in Pahrump debuted the area’s first “pizza theater” concept at its new location at the Pahrump Valley Junction shopping center at 250 S. Highway 160, Suite 6, adjacent to an Albertsons grocery store in the plaza.

The restaurant previously was at 421 S. Frontage Road, just east of the new store.

The “pizza theater” image brings an open design and seating so patrons can look on as their food is being prepared, according to CJ Plunkett, general manager of the Pahrump Domino’s.

The redesign adds seating for more than two dozen guests, both tables and chairs and bar-style seating. The store also has areas to plug in electronic devices with support for USB connections. Free Wi-Fi will also be available for diners.

The “pizza theater” concept also includes entertainment for the kids, with a step-up so the little ones can see what’s happening in the food preparation area, and a chalkboard to write or draw on.

There’s also a little more breathing room at the new store. The restaurant now has 1,800 square feet of space, an increase of 400 square feet from the previous location or nearly a 30 percent gain.

The store has also gained exposure and access to a larger traffic flow, which Plunkett estimated to be about 10 to 15 percent higher than the store’s previous location.

“We’re in a better shopping plaza now,” she said. “We’re not stuck in a little hidden corner anymore.”

The expansion also could help the local economy.

Plunkett said she hired five additional employees for the new store. Overall, there are about 25 to 30 employees at the restaurant.

The Pahrump Domino’s is owned by franchisee Charles Riddle, under his AMD Pizza LLC label. Riddle acquired the Pahrump location about a year-and-a-half ago, along with a Domino’s store in Boulder City.

Overall, Riddle owns 32 Domino’s stores across Nevada, Utah and Arizona, with another location under construction, he said.

His other holdings in Nevada encompass stores in Elko, Winnemucca, Spring Creek and Fallon. Riddle is also looking for real estate in Fernley, he said.

Upgrading to the new “pizza theater” image is a four-year process, according to Riddle. He is moving into the final year of that shift, he said.

Moving to a new location also had its advantages for diners.

“We just decided that Pahrump, the idea of having some tables and chairs, a place for people to come hang out and meet and hang out, it was worth moving the location and giving it a bright, nice facelift,” Riddle said.

“It is a much more welcoming environment for customers walking into our stores, giving them a front-row seat for all of the action,” Fouracre said.

The company has 14,000 locations globally, with the majority of stores shifting by the end of the year, Fouracre said.

Southern Nevada is home to more than 20 corporate and franchise-owned Domino’s stores.