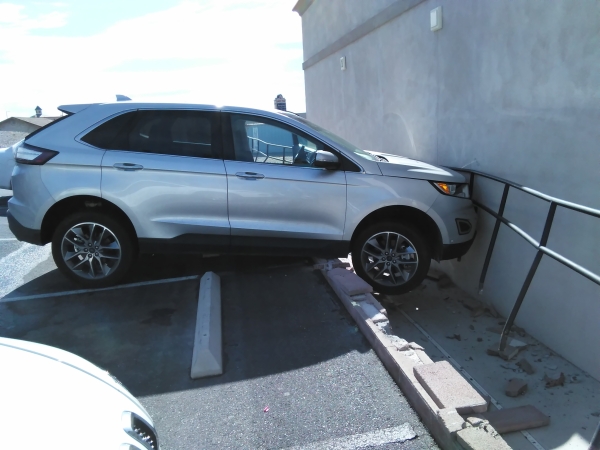 Day-to-day business was interrupted for more than an hour after the driver of a late model SUV plowed into a section of the Healthcare Partners medical facility on Postal Road late Tuesday morning.

No injuries were reported but Pahrump Valley Fire and Rescue Chief Scott Lewis said his department has responded to similar incidents in recent months.

“The driver lost control as she was pulling into a parking spot,” he said. “She actually took out the pedestrian rail, which pushed both the rail and the nose of the vehicle into the building causing some exterior as well as interior structural damage. I’m not sure of the exact age of this driver, but we’ve had a quite a few of these actually.”

Though Lewis noted there were no injuries, the driver was still medically evaluated, but declined transport to the hospital.

The soundness of the structure was also evaluated.

“We’re also checking the interior of the building, which we do not suspect will be anything serious, but it’s a precautionary measure, especially with the nature of occupants within the structure, which is a medical office,” he said. “This one’s interesting because it not only went over the traffic block, but it took out the steel rail and the momentum pushed both the rail and the nose of the vehicle into the building. It appears this was caused by driver error.”

“We are physically located on Postal Road, but the actual street address of the building, and the entryway where the accident occurred is listed as Highway 160,” he said. “In speaking with some of the representatives from this doctor’s office, they’ve indicated that they’ve had that issue in the past, trying to direct the patients where they are located. It’s been a long-standing issue.”