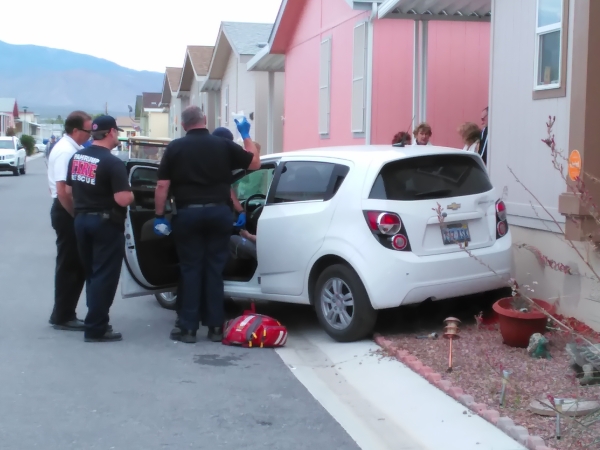 Residents of the Desert Greens community were surprised to see several emergency vehicles arrive in their usually quiet neighborhood late Wednesday after the driver of a subcompact car suffered a medical episode and ended up rolling into an occupied home.

More than a dozen neighbors were milling around the scene as emergency crews tended to the sole occupant of the car, an elderly gentleman.

Pahrump Valley Fire and Rescue Chief Scott Lewis said both the home and the car sustained minor damage following the collision along the 700 block of Montecito Street.

“There was one injured person, the driver, who was treated on the scene and decided not to be transported to the hospital,” he said. “There were no pedestrians hurt or real structural damage to speak of. The sheriff’s office is investigating a possible medical episode that may have preceded the accident.”

Wednesday’s incident mirrored a similar situation back in August when a young woman lost control of the car she was driving.

A neighbor, who chose not to be identified, and lives directly across from the home that was struck noted that Wednesday’s incident was like dÃ©jÃ  vu all over again.

“The first time was a little different than this one,” he said. “He’s an older gentleman and I’m told he had some medical issues. This is the second time this has happened within one house of where I live. It is kind of concerning to me because this is normally a quiet street.”