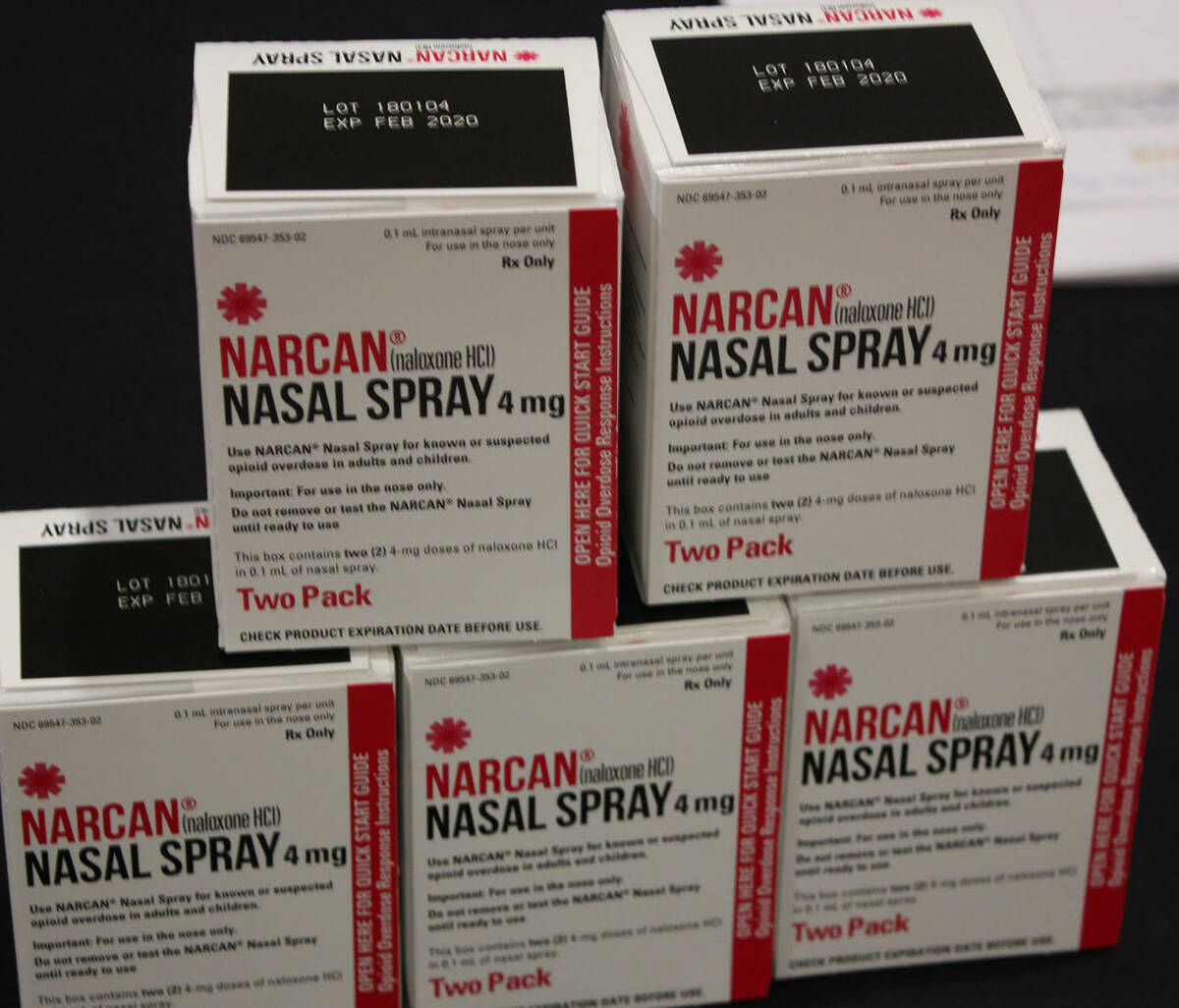 Robin Hebrock/Pahrump Valley Times Narcan, one of the brand names for the opioid overdose reversal medication Naloxone, can be used by everyday citizens in the event they or someone they know has an opioid overdose. Naloxone is available free of charge and without a prescription to all Nevadans.

Drug overdoses are on the rise in Nevada and state officials are striving to raise awareness about treatment options as well as the potentially life-saving medication Naloxone, which can be used to help reverse the effects of an opioid overdose.

According to the Nevada Overdose Surveillance April Statewide Report, drug-related emergency room visit rates increased by 12% from February to March of this year. Between the same time period, suspected opioid-related emergency visit rates rose even more, by 21%, and the opioid prescription rate per 100 residents jumped 15%.

“Overdose deaths in Nevada continue to climb,” said Elyse Monroy, Nevada Overdose to Action Program Manager with the University of Nevada, Reno. “And the state’s SUDORS data tells us that some of the people who unintentionally died by overdose in 2021 may have had a missed intervention point. Overdosing doesn’t have to be fatal.”

Seeking treatment for substance abuse or mental health issues is obviously a key part of the solution, with Monroy remarking, “Access to treatment services and harm reduction supports can help curb overdose fatalities.”

To aid Nevadans in finding these services, the DPBH has a website available, TreatmentConnection.com. This website has an easy-to-use, confidential search function to identify treatment options near the person seeking them, as well as information on different types of treatment and an interactive assessment that can give people an idea of which type might be best for them.

Outside of treatment, Naloxone is also a powerful tool to combat overdose deaths.

Naloxone is an “opioid antagonist” that is used to combat an opioid overdose. “This means that it attaches to opioid receptors and reverses and blocks the effects of other opioids,” informs the National Institute on Drug Abuse. “Naloxone can quickly restore normal breathing to a person if their breathing has slowed or stopped because of an opioid overdose.”

Opioids include an array of drugs, from illegal heroin and synthetic versions such as fentanyl to pain medications commonly prescribed by physicians, such as oxycodone, hydrocodone, codeine, morphine and more.

“This medication is safe to use in the case of a suspected overdose and is approved by the U.S. Food and Drug Administration,” the release noted.

Naloxone is available statewide, without the need for a prescription and at no cost. Nevadans can simply find a location that provides the medication and have it on hand in case they or someone they know experiences an overdose. Thanks to the Nevada Good Samaritan Drug Overdose Act of 2015, those seeking medical treatment for themselves and bystanders lending emergency assistance to someone who may be overdosing no longer need to fear prosecution.

For more information about Naloxone, where to find it and how to administer it visit NVOpioidResponse.org