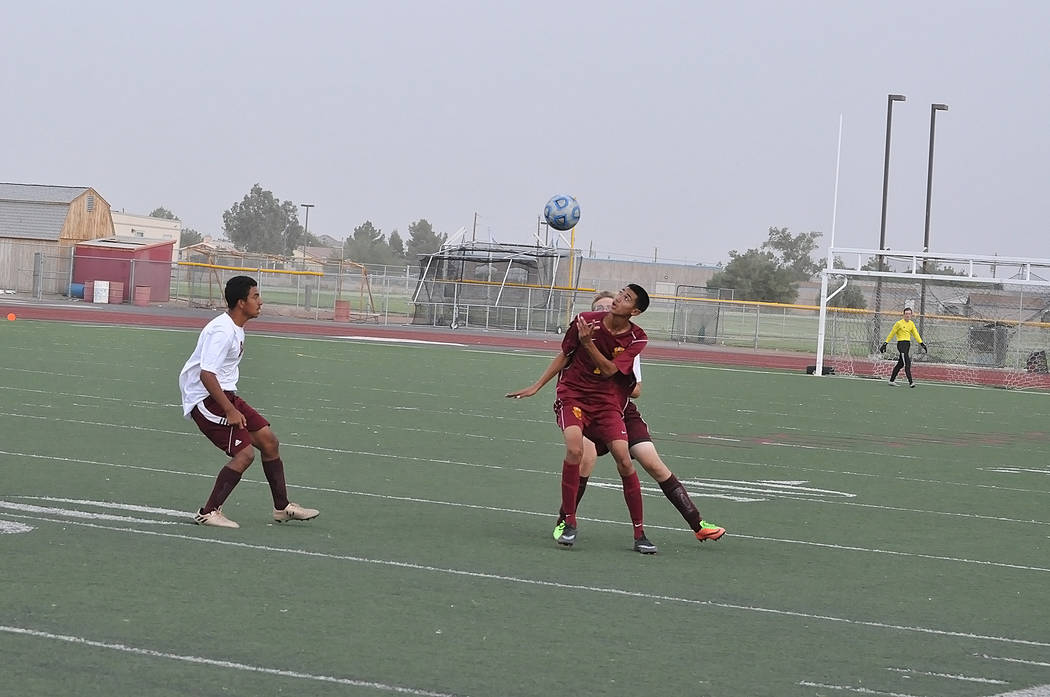 Horace Langford Jr./Pahrump Valley Times - The Pahrump Valley High School Trojans boys soccer team played right through the dust storm. They would kick the ball and the wind would carry it and instead of going straight it would actually curve. 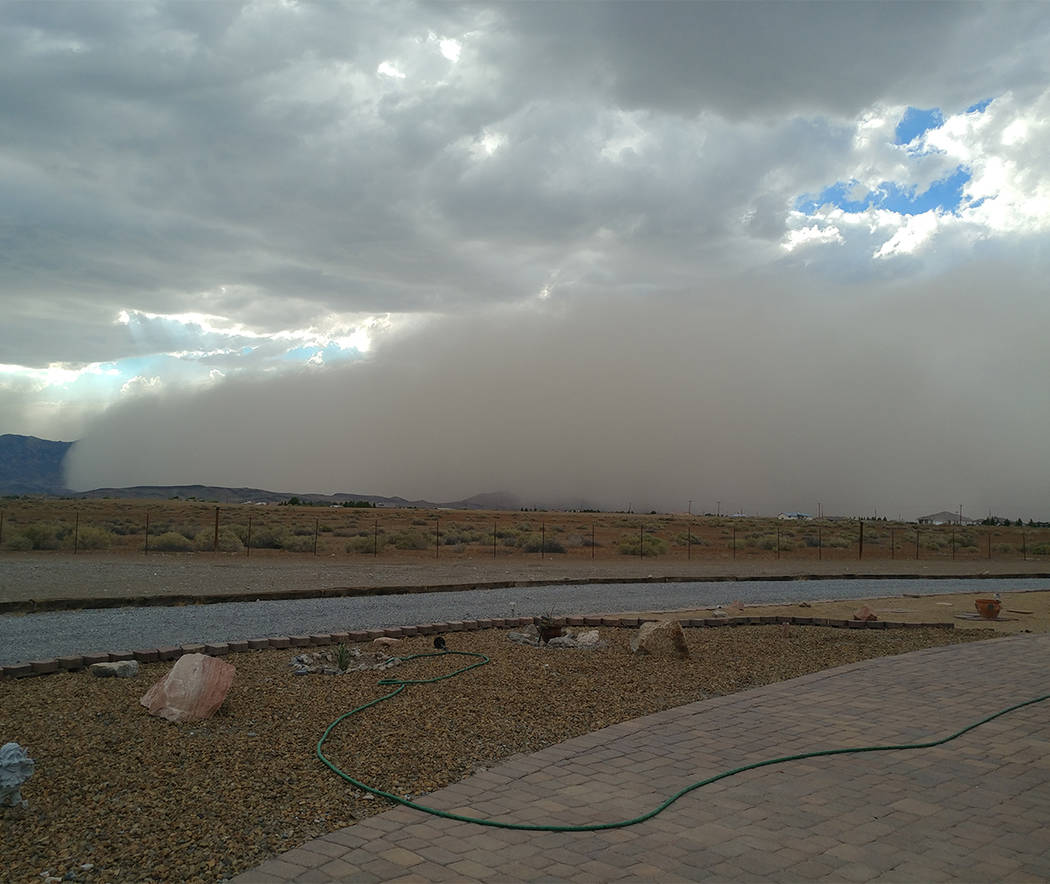 Gail Clampit/Special to the Pahrump Valley Times A photo submitted by Pahrump resident, Gail Clampit, shows the dust storm approaching from the north headed south. The mountains in the photo are the Nopah Mountain Range, which is to the west of Pahrump.

A dust storm warning spanned 90 minutes in Pahrump on Wednesday night. The storm led to low visibility and strong gusts in the region, the National Weather Service said.

The dust storm warning was issued at 5:21 p.m. and was in place until 7 p.m. The affected areas included Pahrump, Indian Springs and Amargosa Valley.

Alex Boothe, a meteorologist with the National Weather Service in Las Vegas, said that the dust storm in Pahrump was associated with a dying storm in Beatty, which pushed out a gusty wind as it was dying. That gusty wind was able to move through Pahrump, Boothe said.

“We couldn’t see the dust plume from the satellite, it was covered by clouds,” Boothe said.

The weather service in Las Vegas instead relied on volunteers that reported weather conditions in Pahrump and also shared photos of the dust storm on social media.

According to the warning, the wind gusts reached up to 50 mph in some of the affected areas.

Boothe said the weather service doesn’t have any visibility data for the affected areas. Around 5:40 p.m., he said the sun stopped getting to the solar sensor that measures solar radiation in Pahrump. Between 5:40 p.m. and 6:40 p.m., the sensor registered zero watts per square meter, and jumped up before the sunset, around the same time as when the dust storm cleared the area.

“Zero to quarter-mile visibility is what we have estimated based on volunteer observations and solar radiation data in the area affected by the dust storm,” Boothe said.

Most dust storms during this time of year are formed by outflow boundaries from dying thunderstorms, Boothe said. Once a storm dies, it can produce gusty winds which can create a dust storm in dry conditions. One of the prerequisites for a dust storm is dry soil and sediment that can be carried by the wind.

“A lot of the dust storms in this period are formed by outflow boundaries from dying thunderstorms,” Boothe said.

It’s unclear, however, whether Pahrump or other Nye County areas should expect another dust storm anytime soon.

“We don’t necessarily forecast dust storms, because they are hard to predict and have a specific location, which is nearly impossible to predict,” Boothe said.

The National Weather Service predicts conditions favorable to formations of such storms.

“The storms just pop in certain areas, where there are certain ingredients present,” Boothe said. “We can’t forecast them a day, even hours out.”

The Las Vegas Review-Journal reported that the strongest gusts never made it to Clark County. Parts of the valley experienced gusts hovering about 30 mph from a nearby dust storm Wednesday night, meteorologist Chelsea Kryston said.

At 5:15 p.m., the weather service reported low visibility in the town and along State Route 160. The storm had winds clocked at more than 50 and 60 miles per hour, with one site reaching the 70s, Kryston said.

“It’s definitely died down in magnitude,” she said.

The excessive heat warning blanketing the Las Vegas Valley ended at 8 p.m., but area temperatures won’t get much cooler this week.

Kryston said the valley might see some rain Thursday, with chances between 20 and 30 percent. After that, the weather service predicted a 10 percent chance of rain through Wednesday.