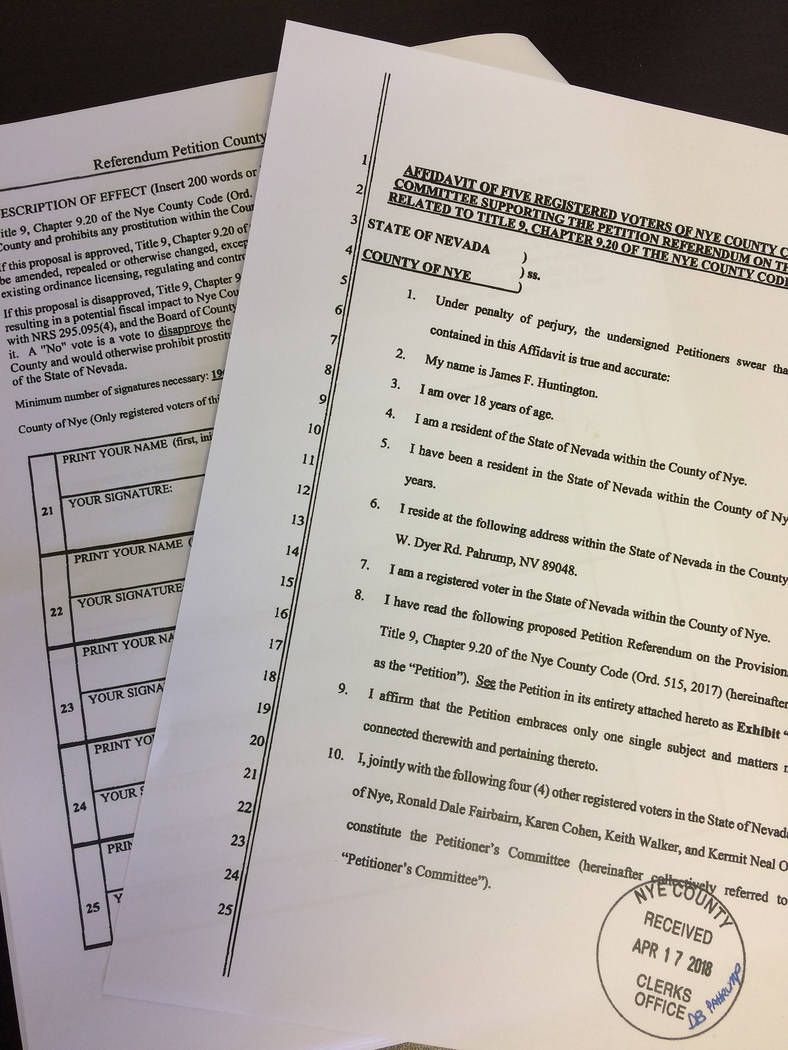 Robin Hebrock/Pahrump Valley Times The petition shown was filed by five Nye County citizens on April 17, including James Huntington, Rob Fairbairn, Karen Cohen, Keith Walker and Kermit Neal Owen. The group calling itself CABINC is pushing to have a ballot question placed with the aim of eliminating the local brothel industry. 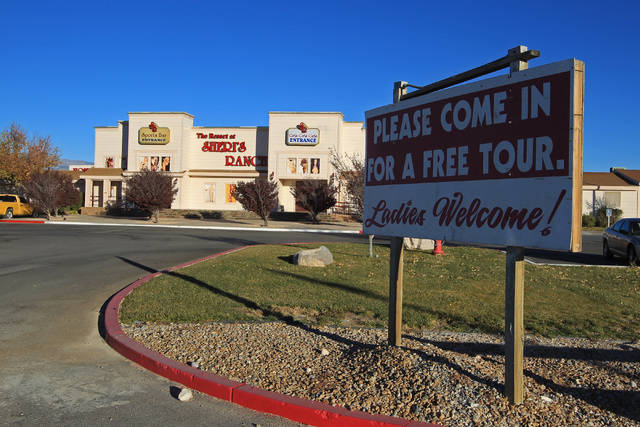 Special to the Pahrump Valley Times Sheri's Ranch brothel in Pahrump is seen in a 2014 photo. The fiscal impact of the brothel industry is planned for discussion by the Nye County Commission later this month.

Citizens Against Brothels in Nye County is marching forward with its effort to see the county’s brothels eliminated.

However, the initiative is not being met without resistance and others are pushing back.

Citizens group spokeswoman Salli Kerr said the group is planning several events in order to gather the required number of voter signatures to have a ballot measure placed for the 2018 general election. The question would ask county residents whether or not they support the current brothel ordinance and as such, those who want the brothels to stay would vote “yes” while those wishing to do away with the industry would vote “no.”

The first public event for the petition signature gather is scheduled for 4 p.m. to 8 p.m. at the Bob Ruud Community Center on Wednesday, May 16.

The citizens group originally filed its petition with the Nye County Clerk on April 17 and in just under a month, the group has managed to collect over 600 signatures, according to Kerr. The petition must be signed by a total of 1,963 registered voters and has to be submitted to the clerk’s office no later than July 16 in order to be placed on the general election ballot.

The citizens group has joined forces with another group with a similar mission, that of banning brothels in Lyon County.

No Little Girl, as the Lyon County organization is called, has created a website dedicated to addressing its take on legalized prostitution, including entire “frequently asked questions” and “issues” sections that blast the industry as one that preys on vulnerable women. Numerous studies are cited, all pointing to damage done by legal prostitution. Much of this information will be available for the public to review during the signature-gathering events.

However, not all agree with the concepts presented by the No Little Girl Campaign and Citizens Against Brothels in Nye County. Predictably, local brothel owners are against the idea of banning the operations but they are far from the only citizens to express frustration over the petition.

In the local community, some church leaders have put their support behind the initiative but not all. At least one Pahrump pastor does not agree with the effort, noting that although he believes prostitution to be a sin, he does not wish to single out one group, which could effectively drive a wedge between the community and the church.

“I believe all sin is exactly the same in God’s eyes,” Southern Valley Baptist Church Pastor John Morris stated. “I am not willing to focus on one thing because if you are going to do that as far as what Christians consider to be sin, Nye County has grow houses, casinos, gambling, youth who are into drugs and committing suicide and I just really think focusing on one thing… is a really bad choice on their part.”

Morris said he took the time to explain his thinking to his congregation and many of them said they agreed with what he had to say. Morris also remarked that he and his wife had discussed the issue and she too thought banning brothels was not a good idea. The safety that a regulated industry creates would be preferable to the alternative, the two concurred.

“One of the pastors here in town really tried to guilt me into this, telling me the brothels are involved in sex trafficking and if we get rid of them then there would be no more sex trafficking and I am kind of a free thinker,” Morris concluded. “In my own personal opinion, I think that would be Backpage, that would be Craigslist, truck stops, places like that which are in the dark alleyways of life, not at the brothels that are regulated.”

Morris said the same pastor had requested to have the petition circulated at Morris’ church but he refused to allow it. “I realize a lot of other people want to be holier than thou and point the finger and somehow think it makes them look better but I just can’t get on that bandwagon. I can’t do it.”

On social media, the reaction was immediate.

The Pahrump Valley Times posted a highlight of an April article on the topic and readers overwhelmingly slammed the proposal to do away with brothels. Many expressed their belief that legal prostitution actually reduces violent sexual crimes while others lambasted those who started Citizens Against Brothels in Nye County for pushing their religious beliefs on the community.

Still others claimed the petition was just a political attack meant to destabilize brothel owner Dennis Hof, who is running for Nevada Assembly District 36 this year. The comments were not all against the petition, however, with a few defending the idea and asserting that they would be glad to see the end of the industry.

One of the main points made by those against the petition to ban brothels centers around the financial aspect of the industry. Several asserted that the county stands to lose revenue if the operations are made to close their doors and lamented the idea of putting so many people out of work.

Kerr and Citizens Against Brothels in Nye County, on the other hand, are prepared to try to debunk this way of thinking.

Kerr said she believed the brothel industry only provides a tiny percentage of the county’s overall budget and that is before factoring in the cost to the county to regulate the industry.

“It seems a large part of the public believes that Nye County gets a larger portion of their budget from the brothels than is really the case,” Kerr explained of her viewpoint. “I don’t believe that any amount earned on the backs of women should be sanctioned by the county and I certainly don’t believe that the county cannot overcome the net proceeds, if any, in other ways.”

Kerr said the fiscal impact of the brothel industry is planned for discussion by the Nye County Commission at a special budget meeting, set for May 22.