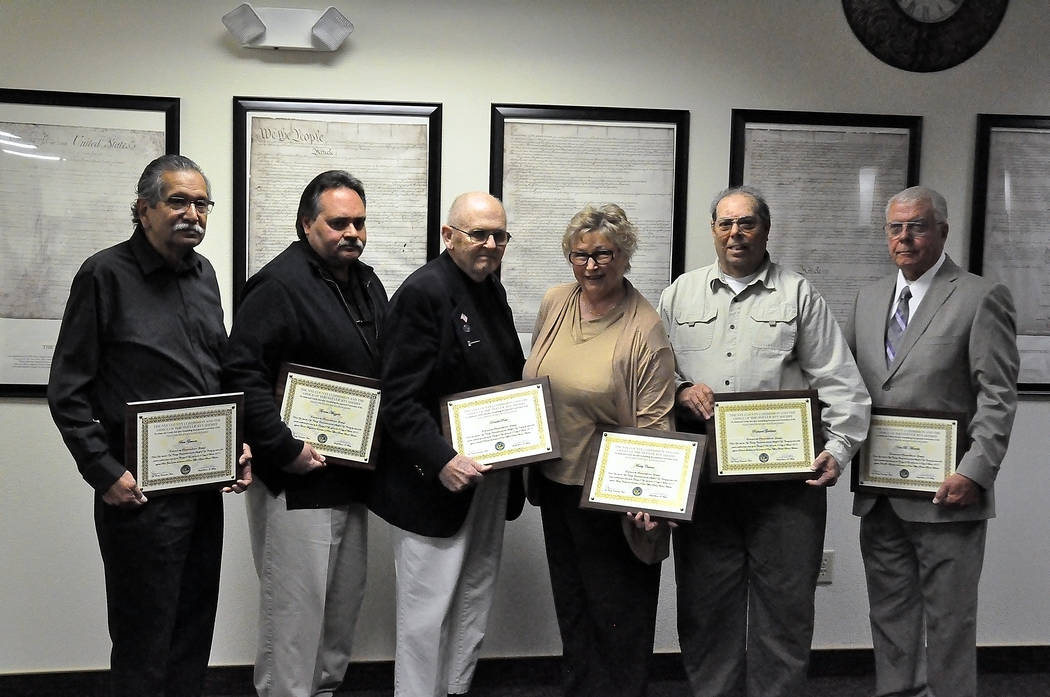 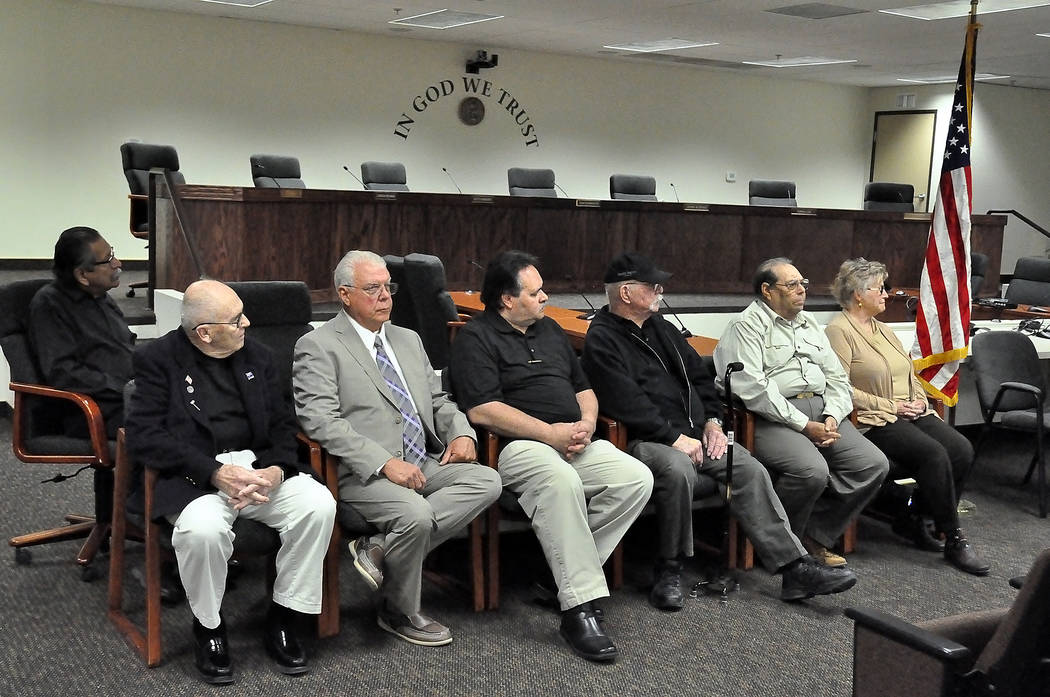 An official ceremony on Friday morning was held inside the Nye County Commission chambers.

The advisory board was the result of Nye County Bill 2014-22, which was passed last November by county commissioners.

The eight members are tasked with reviewing citizen complaints against a peace officer, then forwarding their recommendations regarding disciplinary action through the appropriate channels.

Resident Richard Goldstein said the establishment of an official review board was long overdue in the community.

“We’ve been pushing this in the community for about four or five years now,” he said. “Though we have never had a review board before, some of our lovely citizens wanted grand juries, which wouldn’t work, so they decided to do this review board.

“I volunteered for it because I thought it was going to be a great experience and it was,” he said. “The training was just unbelievable.”

Each advisory board member attended 58 hours of specialized training, while being provided an overview of state and federal laws, Nye County ordinances, as well as sheriff’s office policy and procedures.

The group met each Friday from 8 a.m. to 5 p.m., for the eight-week course, which covered more than 20 topics, ranging from sheriff’s office history, to the realities of law enforcement.

“I was prompted to start the advisory board because a lot of people in the community wanted to have a grand jury,” Carbone recalled. “Knowing that we couldn’t get a judge to commit to a grand jury, I thought that maybe we needed to do something a little different. That’s really what kicked it off.”

Carbone also said the course allowed the advisory board to better understand the workings of a law enforcement agency.

“Now, if something does come in front of them, they know how to do the job they need to do, which means find out the truth with evidence and so on,” he said. “They needed to learn that whole process, and it’s good that they know it now. We have never had a Peace Officer Advisory Review Board before, until now.”

Graduates Marcy Curran and Kent Mosdale said they both enjoyed the training experience.

Mosdale was a former law enforcement official in Los Angeles County years ago.

“I have been involved in law enforcement most of my adult life,” Mosdale said. “Once you get into it, you soon realize that you are helping people out more often than busting them. You can really be a great service to people that need help.”

Curran, meanwhile, noted she became a board member out of the respect she has for law enforcement officers.

“I talk to a lot of people out there who don’t understand what the police do and why they do it,” she said. “I would like to be involved in helping with that. We have a huge shortage of police officers in our community as well as the detention center. We definitely need more help.”

As part of their training, all eight board members took part in a ride-along with deputies on patrol.

“We got called out to the prison on Mesquite, because they had a report of a guy with a bow and arrow,” he said. “Instead, it turned out to be an antelope horn, and he was blowing his horn trying to bring God to the prisoners. After they looked at the guy’s record, it turned out he was on the FBI’s terrorist list.”

The graduation ceremony opened with a greeting from Nye County Detective Sgt. Michael Eisenloffel, followed by a presentation of colors from the sheriff’s office Honor Guard.

County Commissioner John Koenig addressed the graduates on behalf of his colleagues.

“I would like to congratulate all of you for completing the first ever peace officer advisory review board,” he said. “You devoted over 50 hours of your time to this important exercise and I hope you enjoyed it and found it interesting and useful. I am sure you have a greater understanding of what our officers do on a daily basis.”

“This was one of the two items on my platform when I ran for commissioner, to finish what commissioner Carbone had started, and it gives me great pleasure to be able to cross it off my ever-growing list,” Koenig said.