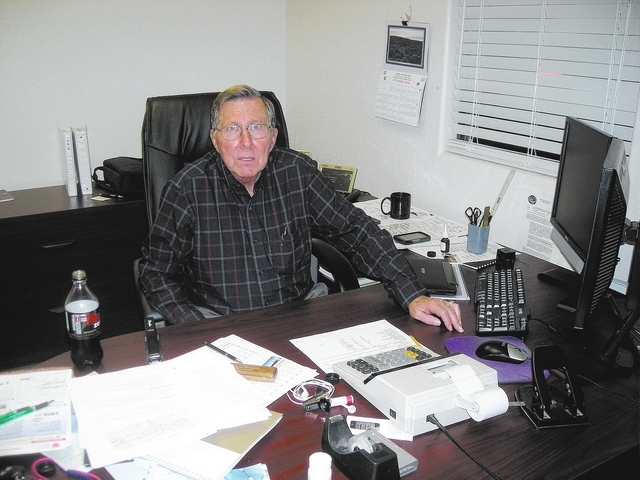 Nye County Treasurer Richard Billman will be seeking voter approval in the 2014 election, after his appointment to fill the unexpired term of Mike Maher last May.

Billman got some support from accountant Dan McArthur when he presented the fiscal year 2012-13 audit in January, he told county commissioners the monthly financial statements are being submitted on a timely basis. The county treasurer’s job is to receive money paid to the county and allocate them into various funds.

Billman said he’s been working hard on getting the books caught up, but has been hampered by a lack of staff.

“He (Maher) left with 18 to 20 months worth of reports that weren’t done. We were pretty well caught up, but we’re down one person right now and so we’re slipping a little bit. I think we’re probably about four months from being caught up,” Billman said. He predicted by March the treasurer’s office monthly reports will be up to date.

Another big job is the annual tax sale. Billman said it’s probably going to be the biggest treasurer’s tax sale the county ever had. After three years without a tax payment, the bill goes over to the treasurer’s office for collection where it remains for one year, he said. Letters have gone out informing those delinquent property taxpayers after March 18 they can’t get a re-conveyance on the property, it will be sold at auction.

“It’s going to be ugly from my standpoint because I see a lot of the people who are in the position where they’re not going to be able to make it,” Billman said. “I’ve been a bill collector for 45 years but always I had some kind of discretion. There’s no discretion in the Nevada Revised Statutes.”

Billman said a lot of properties will be auctioned that were part of the Hans Seibt bankruptcy, which is now lifted. Another reason for the long list of properties is the bad economy has caught up with the treasurer’s tax sale. He hears a lot of sob stories about someone whose spouse died and they can’t keep up the payments.

A 1968 graduate of Vanderbilt University, Billman came to Las Vegas that year and joined the American Creditors Bureau, one of the largest national collection agencies at the time. He was promoted to collections manager and became California Qualified Manager of the credit bureau’s largest branch in San Francisco, managing 75 employees.

Back in Nevada, when Rural Health Management Corporation left Pahrump Medical Center, Billman said he was contracted to help determine the funds due and collect outstanding receivables, that money was remitted to Nye County over several years.

Billman left a lucrative career in the private sector to become county treasurer. He was employed by Nevada Credico Inc. in Las Vegas since 1976, at the time he left he was executive vice president of the company.

In his April 6, 2013 application letter to Nye County Commissioners, Billman said he is accustomed to keeping timely records.

“The State of Nevada Financial Institutions Division performs both an annual and a semi-annual audit, which, as the qualified manager, I am required to defend. It is an absolute requirement that my books and funds are balanced each and every day. For more than 35 years I have successfully overseen the collection, deposit and dispersal of funds under the State of Nevada’s watchful eye.”

Billman said he had to learn more about the accounting side in the treasurer’s office, which he didn’t do at the collection agency.

Billman also served one term on the Pahrump Town Board, he was elected in 2002, winning 3,955 votes, 15.05 percent of the total, second among a field of candidates.

When asked about any other accomplishments in his nine months on the job, Billman added, “I think I’ve got the staff to the point where they trust me and work with me. They didn’t with Michael. I know that. I don’t think they ever trusted him and I know that he never trusted them.”

While Maher talked about bringing more revenue to the county in his campaign speech, Billman said county investments are prescribed by state statute.

“We can’t buy stocks and bonds. We can buy treasuries. We can buy different lengths of treasury bonds,” Billman said.

Billman said Maher actually drew back the maturities on some treasury bonds by six months, reducing the amount of revenue the county earned off those investments. The plunging interest rates mean Nye County, like many investors, have little interest income to show for it. Billman said one investment allows the county to earn 1.5 percent interest, the others don’t even draw 1 percent any more. Nye County had hoped to pay off the debt on the new jail with interest on Payments Equal to Taxes, funds built up with money from the U.S. Department of Energy for Yucca Mountain.

Billman has one employee in Pahrump besides himself, in Tonopah there’s Deputy Treasurer Kim Zimmerman — who was appointed interim treasurer last year after Maher’s March resignation— and two other employees.

There was some grumbling about political favoritism from former County Treasurer Gary Budahl, a Democrat, who applied for his old job but didn’t get it, Billman said.

“I can tell you that Gary never made any friends on the county commission,” Budahl said. “I’ve been nice to them and they’ve always been nice to me and I never get in their face. I wouldn’t argue with them that I’m smarter than they are.”

Billman’s Jan. 6 campaign report shows $4,768 in contributions, all from himself, and $4,638 in expenses dating back to June 12, an early start to the campaign.

If he’s elected to a full four-year term, Billman said, “I want to get caught up and I want to feel safe and secure in it.”