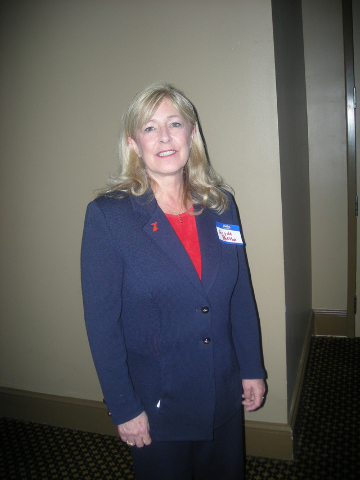 Las Vegas attorney Angela Bello, a Republican, announced she will run for Nye County district attorney against incumbent Brian Kunzi, a Democrat, in the 2014 election.

An attorney with the Las Vegas firm Wolfenzon and Rolle, Bello said she will get a house in Pahrump if she’s elected. She said she’s used to commuting too, from her days living in Las Vegas and attending law school in San Diego.

Bello stressed an open door policy and said she would meet with anyone.

“I come to you as an outsider. I spent the last 40 years in Las Vegas, 14 of it now has been practicing law. But I can assure you that if I am elected the people will have ample opportunity to get to know me very, very well. I will dedicate myself fully to becoming a strong presence in this community,” Bello told attendees at the 35th Annual Lincoln Day Dinner at the Pahrump Nugget Casino. “I will regularly meet with our elected officials and our law enforcement to work tirelessly to make sure they have the tools they need to carry out their responsibility and we do not unnecessarily spend our resources.”

Bello was a clerk for Eighth District Judge Gene T. Porter. She joked that proves she can work with Democrats, Porter was formerly the Democratic majority leader of the Nevada Assembly. In 2005, Bello joined with Porter to form the law firm Porter and Bello. She went on to be managing attorney for Coleman Law Associates until 2010. Bello lists among her memorable cases her representation of the MGM Grand in the bedlam following the infamous Tyson-Holyfield fight, her defense of Harrah’s Laughlin Casino after the 2002 Laughlin River Run riot and a federal trademark battle over the musical group The Platters.

“I pretty much knew at some time I would end up in public service. I’m at that point in my career I wanted to make that move. As fate would have it, someone in Clark County told me Nye was looking for a Republican candidate and I thought I would fit the bill,” Bello said.

Asked why she feels qualified to be Nye County DA, Bello said, “I’m an attorney, I think I’m pretty darned good at it. I’m confident I’m qualified in that respect. I’m diligent. I take the law very seriously.”

Bello said she is sincere when she says people want justice and fair treatment under the law, but she said there’s more to it than that. “I think you really need to care about people, enjoy working with them. I think you need the right demeanor. I think communication skills are critical.”

Though she has been more involved in civil litigation, Bello said she’s up to the challenge working in diverse areas of law and expects her work in the criminal arena will be overseeing what she expects will be a qualified staff of deputy district attorneys.

The 2014 district attorney’s race is shaping up so far to be a very civil affair, after a very dirty 2010 campaign in which former DA Bob Beckett was arrested on charges of mishandling the bad check program, Beckett then filed charges against his arresting detective David Boruchowitz. The sheriff’s office threatened charges against Beckett for abuse of authority. Beckett had fired his longtime chief civil deputy district attorney Ron Kent in February after Kent announced he would run against him. Kunzi went on to eke out a 182-vote victory over Kent in the November 2010 general election. Kent two years later won election as Pahrump Justice of the Peace replacing a retiring Tina Brisebill.

“I don’t consider myself running against Mr. Kunzi at this point,” Bello said. She applauded the DA for attending the Republican Lincoln Day Dinner and taking a few pot shots.

Bello especially wants to make sure victims get respect and access to the DA’s office, including regular updates on the status of their case. She said a DA needs to be open-minded, have ethics and be tough on crime — tough but fair.

“I’ve been a victim of crime as well as had loved ones on the other side. I think that puts me in a unique position,” Bello said.

When it comes to plea bargaining, Bello said that’s always a campaign issue, without it the court system would grind to a halt. She said the court system needs to take into consideration first-time offenders.

“You’re not supposed to have someone’s life ruined over a small, one-time mistake. You’re going to want to give them the punishment that fits the crime. Everyone is supposed to be treated equally. But all first-time offenders, if it’s a victimless crime, they have to be punished. But do you want prison? Is that the best use of our resources?”

“I think people do have to be accountable but I think you have to be tough but fair. You can’t be tough ignoring everybody’s rights,” Bello said. She added, “I’m not about chalking up all the convictions on my belt, but people will be held accountable.”