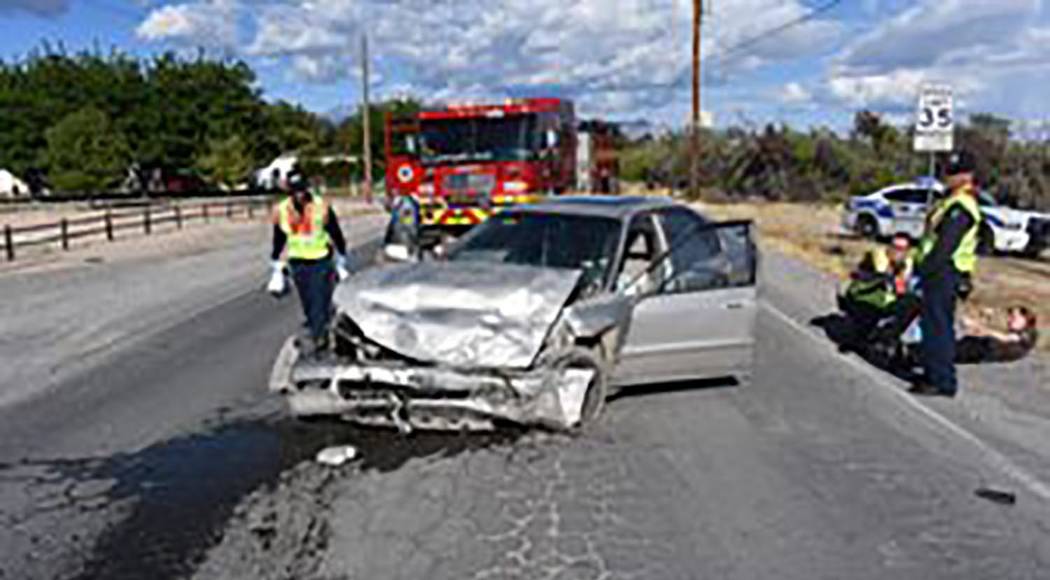 Special to the Pahrump Valley Times Two people were transported to Desert View Hospital following a two-vehicle collision at the intersection of Basin Avenue and David Street, just after 5 p.m. on Saturday May 11. Both vehicles sustained significant damage as a result of the high-impact crash. 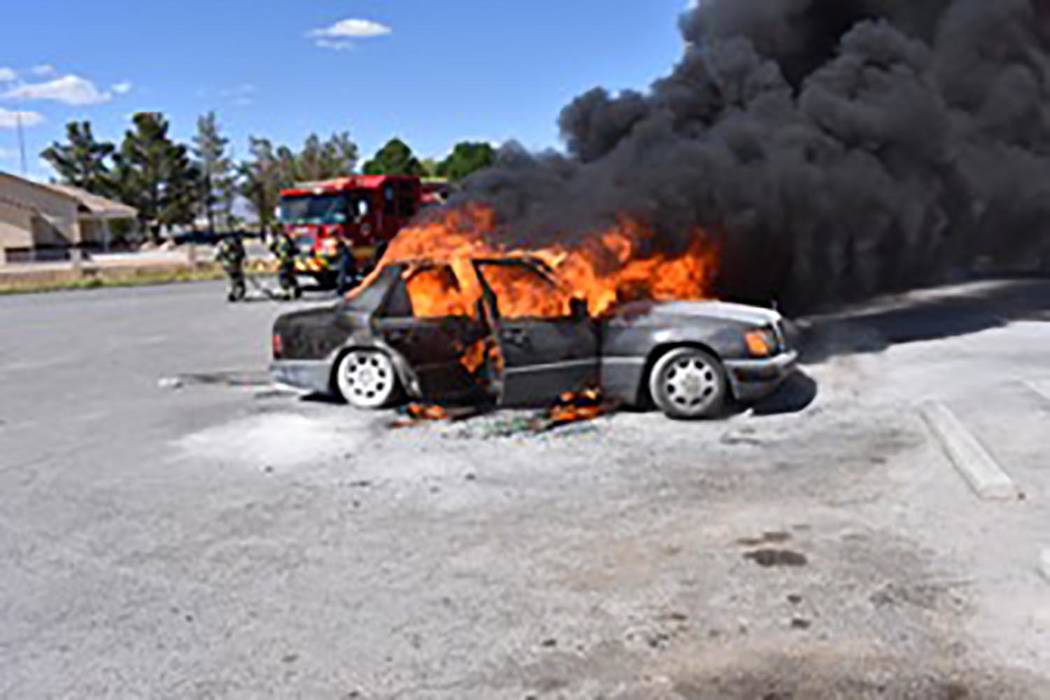 Special to the Pahrump Valley Times Pahrump fire crews were dispatched to a convenience store along the 900 block of North Leslie Street for a vehicle fire, just after 3:30 p.m. on Monday May 13. No injuries were reported, but the vehicle was a complete loss.

Crews from Pahrump Valley Fire and Rescue remained quite active as they responded to a series of various recent service calls.

Fire Chief Scott Lewis said crews were dispatched for an off-road vehicle crash in the area of 140 East Gamebird Road at approximately 4:40 p.m., on Tuesday, May 7.

“Crews arrived on location to find the rider of an ATV in a residential house,” he said. “Crews quickly assessed the patient and were looking to fly that patient into Las Vegas, for the injuries sustained, however, flight was unavailable. That patient was then subsequently transported to Desert View Hospital and later transported to UMC Trauma in Las Vegas.”

The following day, fire crews responded to a structure fire on the 1800 block of Big Horn Street just before 5 p.m.

“Specifically, while responding, crews were notified of a kitchen fire involving the oven,” Lewis said. “Two females that were on location reported having shortness of breath. Crews quickly controlled the fire with no extension and treated the patients on scene. Both decided against transport to the local hospital.”

On Thursday, May 9, fire crews were summoned to the 1700 block of West Chukar Street, for an unknown type of fire just after 4 p.m.

“As crews were responding, we were notified that it was, in fact, a brush fire, which was rapidly growing,” Lewis said. “Upon arrival, crews found a mixed-fuel brush fire running alongside the roadway, with several nearby structures. Crews quickly controlled the fire with no further extension and no injuries were reported. The cause of the fire was determined to be an unauthorized controlled burn.”

On Friday, May 10, fire crews responded to a report of an off-road ATV crash along the 5100 block of West Maple Road, just after 3 p.m.

“Crews arrived to find an off-road ATV accident involving a juvenile,” Lewis said. “The juvenile sustained injuries consistent with flight, however, flight was down due to the weather. That patient was transported to the local hospital and subsequently flown to UMC Trauma in Las Vegas at a later time.”

On Saturday, May 11, Pahrump fire crews were dispatched to the area of Ash Meadows and Bell Vista Road for a single-vehicle rollover crash at approximately 9:30 a.m.

“Upon arrival, crews found the accident as described,” Lewis said. “There were four patients that were assessed, but despite their injuries, all decided not to be transported to the local hospital.”

Several hours later on Saturday, fire crews responded to a two-vehicle crash at the intersection of Basin Avenue and David Street, just after 5 p.m.

Crews arrived to find the two-vehicle, high-impact collision as reported,” Lewis said. “There was significant damage to both vehicles, and two patients were subsequently transported to the local hospital.”

Also on Saturday, fire crews responded to the 2900 block of South Blagg Road for a reported structure fire at 9:44 p.m.

Lewis noted that crews arrived on scene to find a fire in the HVAC system, where it was quickly extinguished with no further extension to the home.

On Monday, May 13, fire crews were dispatched to a convenience store on the 900 block of North Leslie Street for a vehicle fire, just after 3:30 p.m.

“The vehicle was in close proximity to a structure and fuel pumps,” Lewis said. “Crews arrived to find a vehicle fully involved with exposure structures and the fuel island. Crews quickly controlled the fire with no extension and there were no injuries reported. The cause of the fire is thought to be accidental in nature due to mechanical failure.”