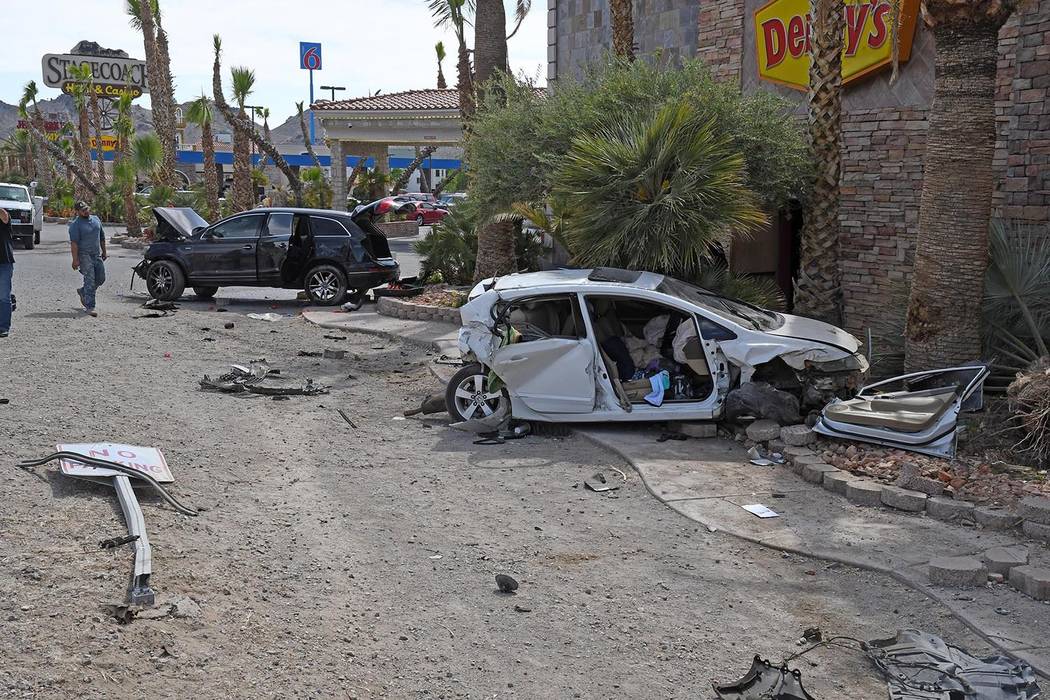 Richard Stephens/Special to the Pahrump Valley Times At least two people were transported by flight to UMC Trauma in Las Vegas following a three-vehicle crash along Highway 95 in Beatty, on Friday May 3rd. A driver identified as Keith Robert Knotek from Arizona, suspected of driving under the influence of alcohol was arrested by Nevada Highway Patrol troopers. 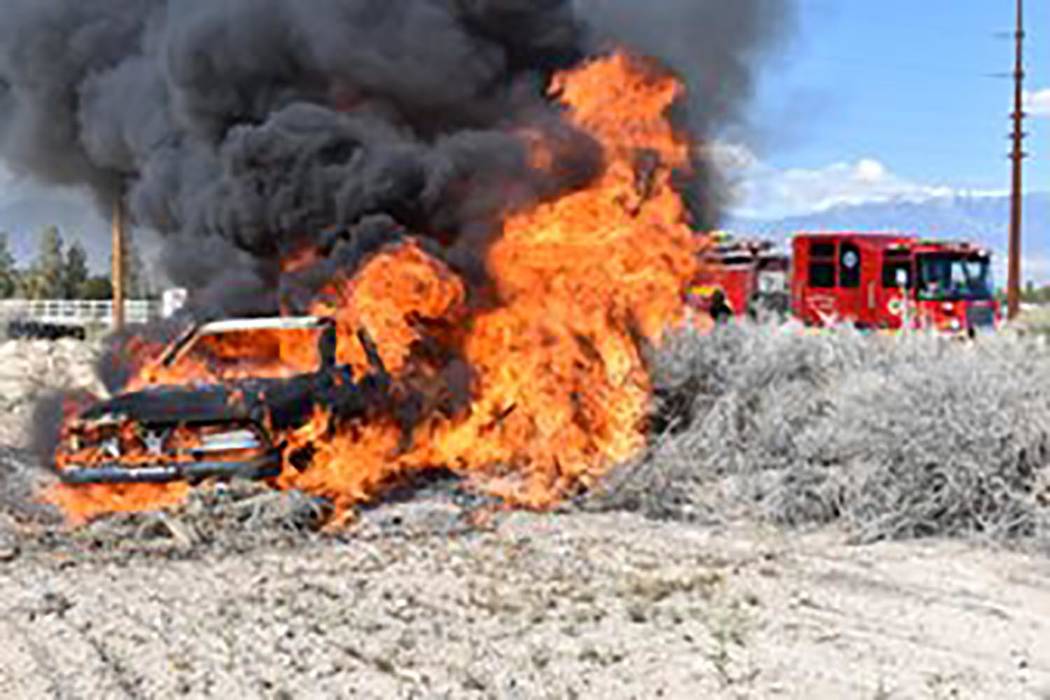 Special to the Pahrump Valley Times Pahrump fire crews responded to a vehicle fire along the 2400 block of East Thousandaire just before 4 p.m. on Saturday May 4. No injuries were reported, but the vehicle was a total loss. 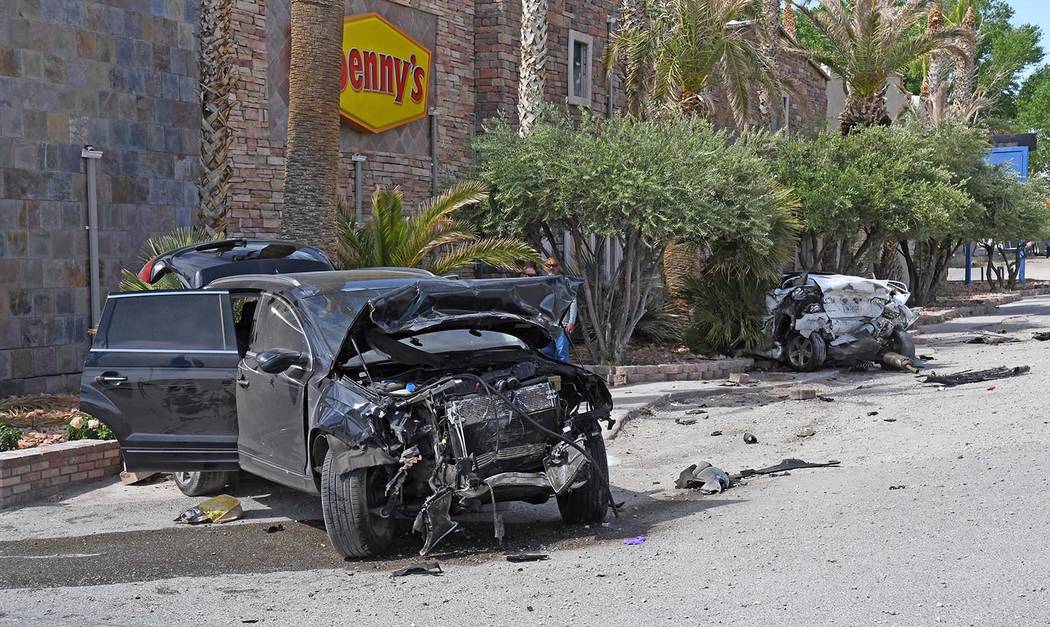 Richard Stephens/Special to the Pahrump Valley Times On Friday, May 3, at approximately 2:59 p.m., Lewis said EMTs were dispatched on a mutual aid assignment for a multi-vehicle collision along U.S. Highway 95 in the town of Beatty.

Fire Chief Scott Lewis said crews were summoned to a serious rollover crash just before 1:30 p.m. on Thursday, May 2.

“Crews were dispatched to North Leslie Street and Pilot Road for a single-vehicle accident with ejection,” he said. “Crews arrived to find the accident as described, where the driver sustained serious injuries. Mercy Air 24 was launched, and with a landing zone established on scene, patient care was transferred to Mercy Air and that patient was flown to UMC Trauma in Las Vegas.”

On Friday, May 3, at approximately 2:59 p.m., Lewis said EMTs were dispatched to a mutual aid assignment for a multi-vehicle collision along U.S. Highway 95 in the town of Beatty.

“Reports indicated that it was a three-vehicle collision with entrapment,” Lewis said. “Crews worked under the direction of Fire Chief Mike Harmon. There were two patients that were flighted out from the scene after extrication was completed. That accident is under investigation.”

A Nevada Highway Patrol news release regarding that crash stated that the driver, identified as Keith Robert Knotek of Arizona, was arrested on suspicion of driving under the influence.

Also on Friday, May 3 at approximately 9:34 p.m., Pahrump fire crews were dispatched for a structure fire on the 4400 block of East Turner Street.

“Crews arrived to find a double-wide manufactured dwelling with nothing showing,” Lewis said. “However, the investigation revealed a wall outlet had caught fire within the wall.

“That fire was extinguished without extension, although there was a very warm wall service running to almost the ceiling. Power was secured to the property without incident and there were no injuries reported.”

The following day, fire crews responded to a report of a passenger vehicle fire along the 2400 block of East Thousandaire Boulevard just before 4 p.m.

“Crews arrived on scene to find a well-involved vehicle that was off the roadway,” Lewis said. “Crews quickly controlled the fire and found no occupants within. It was later determined that the vehicle had been involved in a minor accident where it left the roadway, became mired in a debris pile where it subsequently caught on fire while they were trying to remove it. There were no injuries reported.”

On May 5, at approximately 12:40 p.m., fire crews were dispatched for a report of a structure fire on the 3400 block of East Tillman Street.

“Crews arrived to find fire showing from the front of a double-wide manufactured dwelling,” Lewis said. “There were also numerous exposure structures, including vehicles and a motorhome as well as an accessory outbuilding.”

Lewis went on to note that the initial investigation revealed that all occupants had safely escaped the house, with no injuries, however, one person was medically evaluated for a non-related fire issue.

“That person opted against transport to the local hospital,” Lewis said. “The fire was controlled in quick fashion, however, there was considerable extension on the underside of the structure, and the fire was also windswept, so there were challenges during the overall phase. It appears that there may have been a delay in protection of the fire, as well as a possible delay in the reporting of the fire. The area was a non-hydrogenated area, on the very outskirts of town. The cause of the fire is under investigation, however, it appears to be accidental in nature. Crews cleared the scene approximately four hours after the initial report.”

Also on Sunday, May 5, fire crews responded to a mutual aid assignment in Clark County at approximately 7:46 p.m., for a report of a gunshot wound in the area of Sandy Valley.

“Pahrump crews responded but as they neared the scene, they were canceled as apparently the female victim did not survive the incident,” Lewis said.

Officials in Clark County have yet to release additional details related to the shooting.