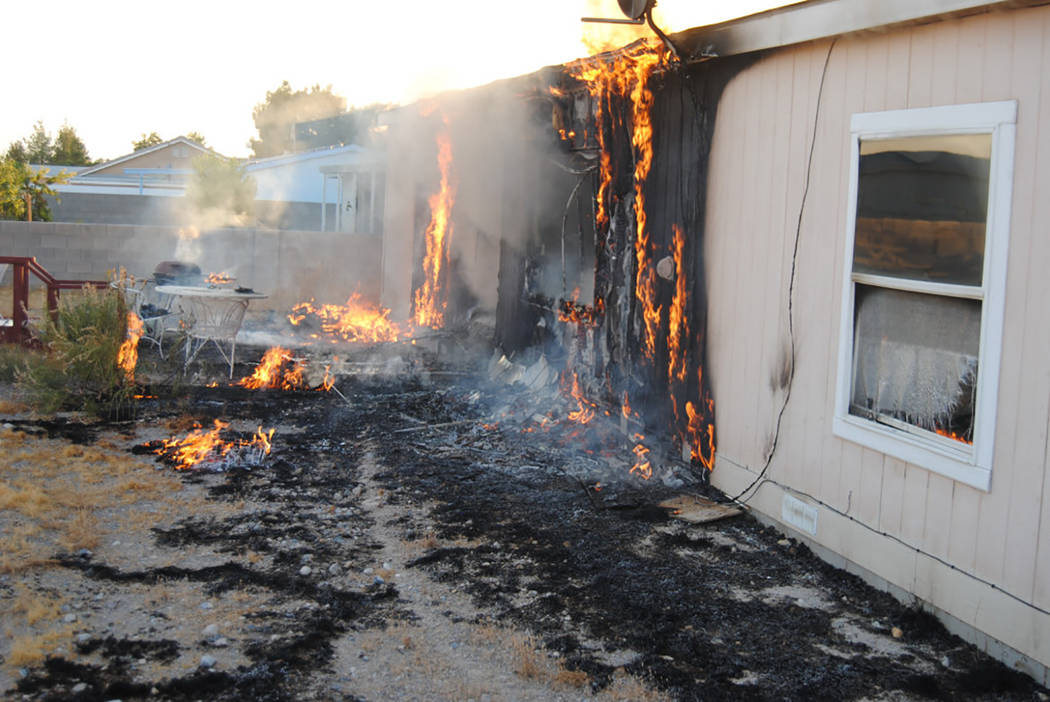 Selwyn Harris/Pahrump Valley Times A home along East Simkins sustained significant fire, heat and smoke damage and heat as well as smoke damage on Friday. All occupants safely exited the home as fire crews arrived. The cause of the fire is under investigation 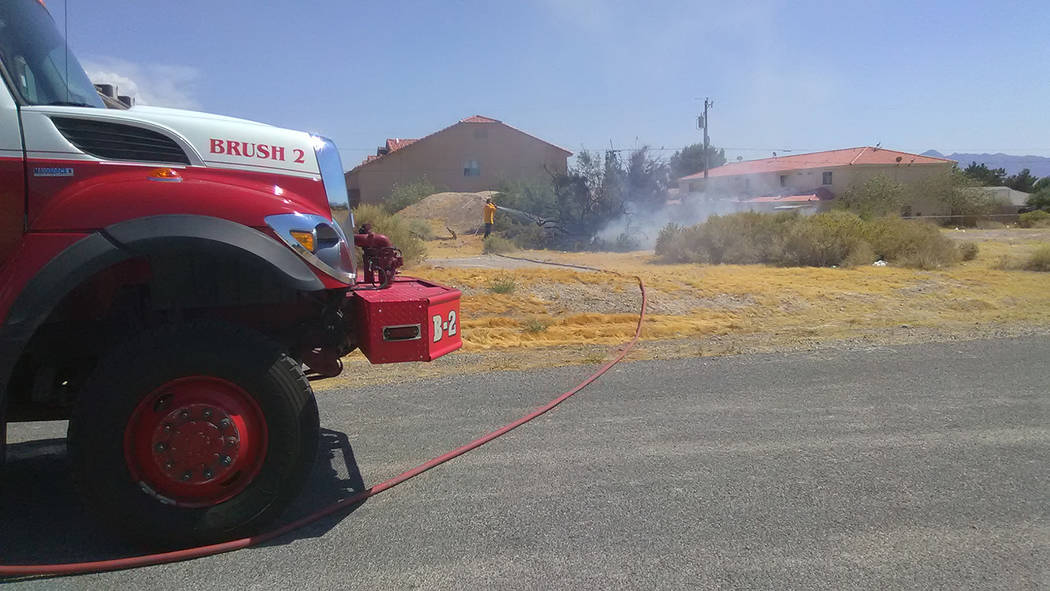 Selwyn Harris/Pahrump Valley Times Fire crews responded to a brush fire at Pahrump Valley Boulevard and Arrowhead Street early Monday afternoon. No injuries were reported. The cause of the fire is under investigation

Pahrump Valley Fire and Rescue crews were met with a series of fires over the past week.

Fire Chief Scott Lewis said crews were dispatched for a vehicle fire along the 3200 block of West Horn Street on Tuesday, July 11 just before 7 p.m.

“Upon arrival, crews found an engine compartment fire that was mostly extinguished,” he said. “The vehicle had been moved from the area in which it had posed an exposure issue to a nearby dwelling. The vehicle was moved to the rear of the property and the fire was controlled and contained. There were no injuries.”

“Upon arrival, crews found a structure that was unoccupied and was deemed an extension to a fire from a nearby dumpster. Crews had the fire to minimal damage to the structure. There were no injuries and that fire is under investigation.”

Roughly eight hours later, crews were dispatched to the 600 block of East Simkins Road for yet another structure fire.

“Upon arrival, we found heavy smoke showing from a doublewide manufactured dwelling,” Chief Lewis said. “After further investigation by crews, they found heavy fire showing along the back side of the structure and into the yard. They commenced an interior attack and halted the forward progress of the fire with no further extension. The attached two-car garage was undamaged by the fire, however, the living space sustained significant fire and heat as well as smoke damage. It was an occupied structure and the occupants safely egressed. There were no injuries. That fire is also under investigation.”

On Saturday, fire crews responded to a structure fire on the 700 block of West Jarvis Road just before 8 a.m.

Upon arrival, crews found an electrical fire which occurred in a bedroom of the home.

“That fire was quickly extinguished,” Lewis said. “Crews checked for extensions and having found none, they cleared. Interestingly enough, the ignition source was traced back to a male cat which sprayed a nearby wall outlet causing an electrical arc which caught the wall on fire. That was a witnessed event.”

On Sunday, July 16, fire crews were dispatched for a motor vehicle crash in the area of Leslie Street and Scales Way involving an ATV rider, just before 3:30 p.m.

“The rider had sustained a serious leg injury, warranting a trip to UMC Trauma in Las Vegas,” Lewis said. “Mercy Air 21 was added to the assignment where crews transported the patient to Mercy Air 21, where patient care was transferred and that patient was subsequently flown to UMC Trauma.”

On Monday crews responded to a brush fire in the area of Honeysuckle and Java streets at 4:30 a.m.

“Upon arrival, crews found a grounds-cover fire running alongside of the roadway,” Lewis said. “There were no immediate structure exposures and that fire was quickly controlled without incident.”

Just before 9 a.m. on Monday, crews were summoned to the area of Highway 160 and U.S. 95 for a two-vehicle collision with injuries.

The crash involved a semi-truck and a passenger vehicle.

“Upon arrival, we found a two-vehicle accident, where one person was briefly entrapped inside a sedan,” Lewis said. “That person was quickly extricated. Mercy Air 21 flew to the scene and that patient was transferred to UMC Trauma in Las Vegas.”

“We were dispatched for a report of an unknown type fire in the area of Arrowhead Street and Pahrump Valley Boulevard,” Lewis said. “As we were responding, we were notified that it was a brush fire with several structures in close proximity. Upon arrival, we found the fire as described, however, the structures were not immediate exposures.

“The winds developed a head that was headed toward the northeast and crews quickly controlled that fire with no extensions,” Lewis said. “There were no injuries reported. It’s uncertain whether spent fireworks in that vicinity were the cause of this brush fire.”