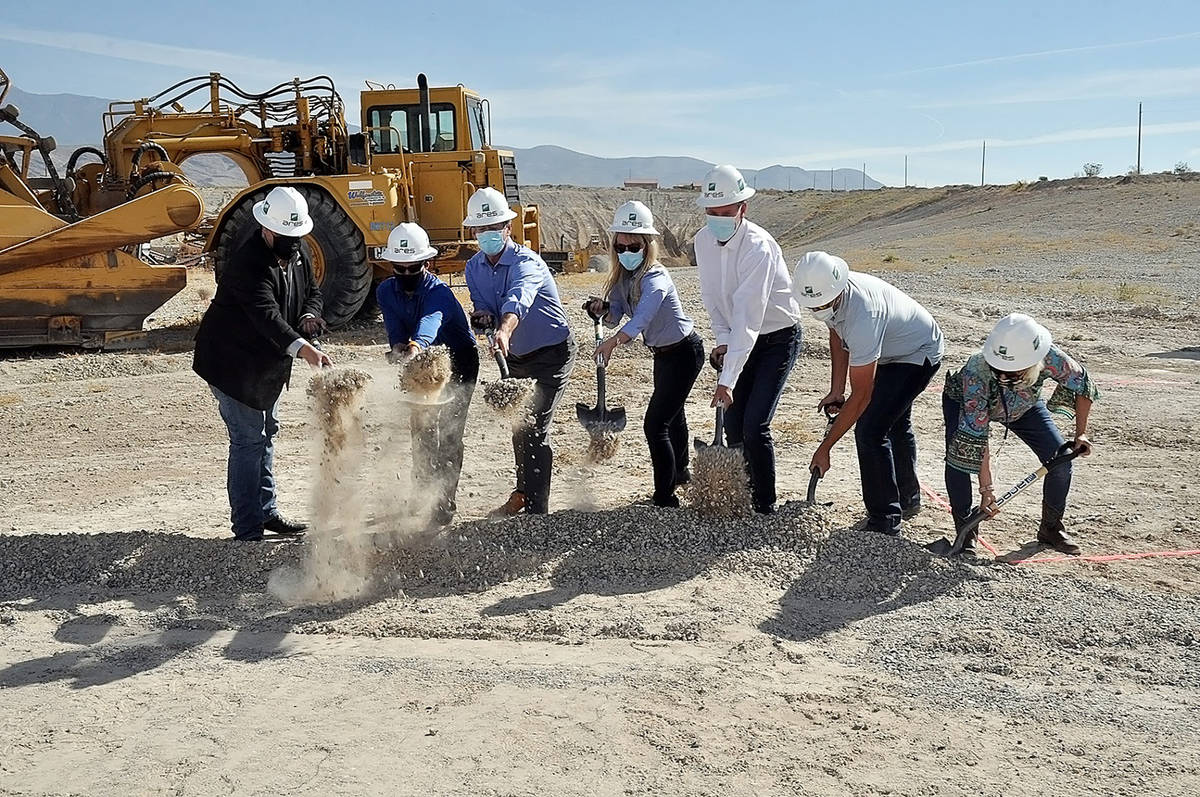 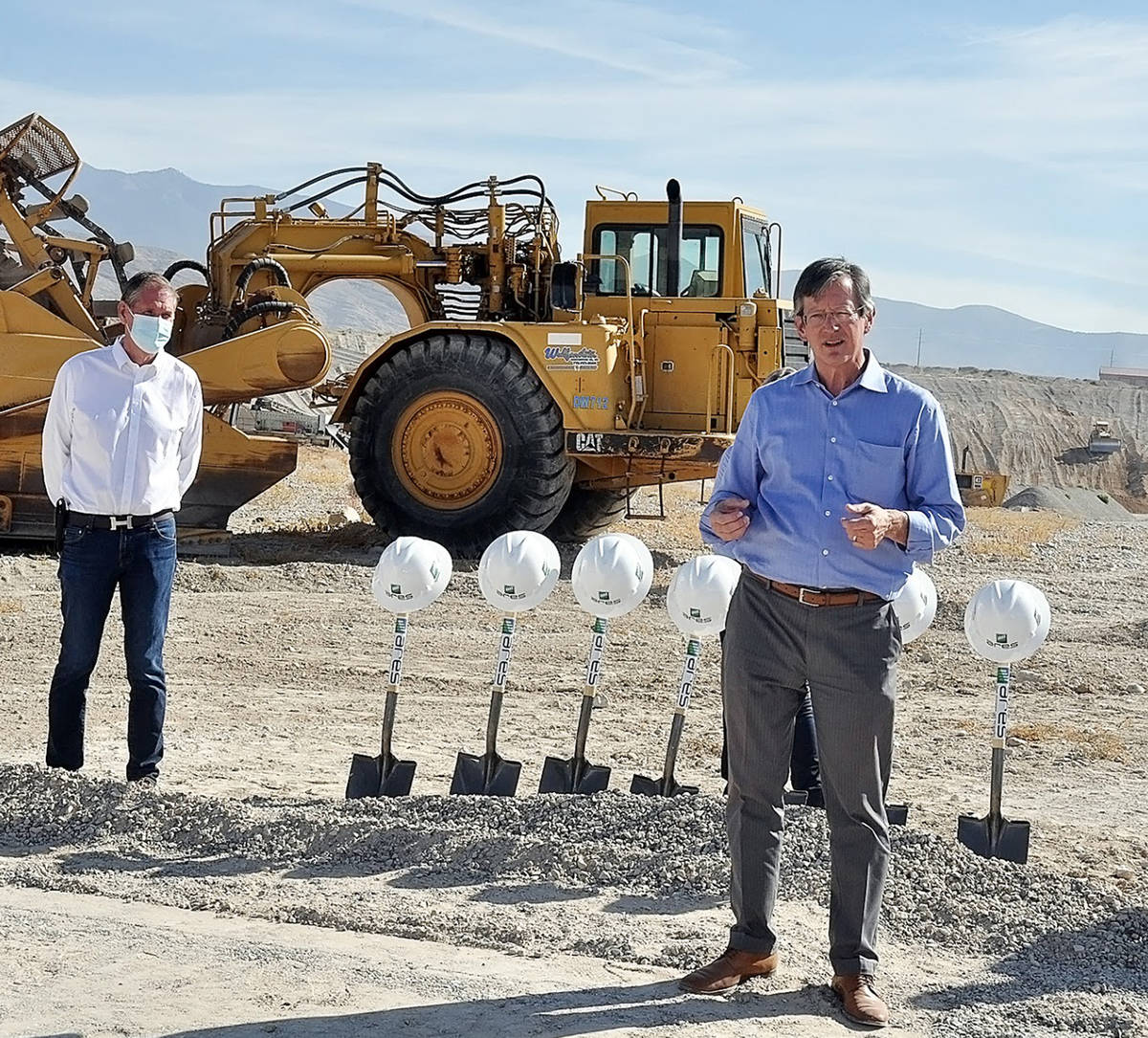 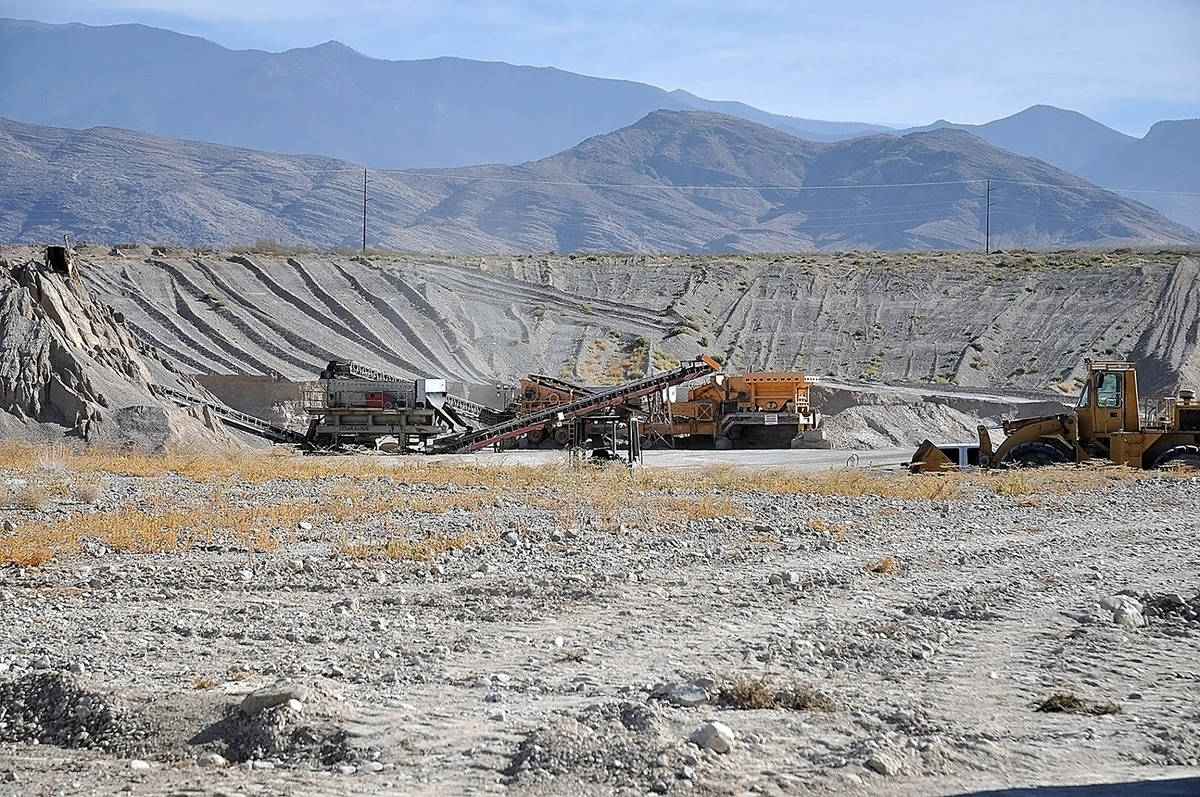 Horace Langford Jr./Pahrump Valley Times A view of the Gamebird Pit, a sand and gravel mine operated by Wulfenstein Construction Company, which has been selected as the site for an energy storage project from ARES Nevada. 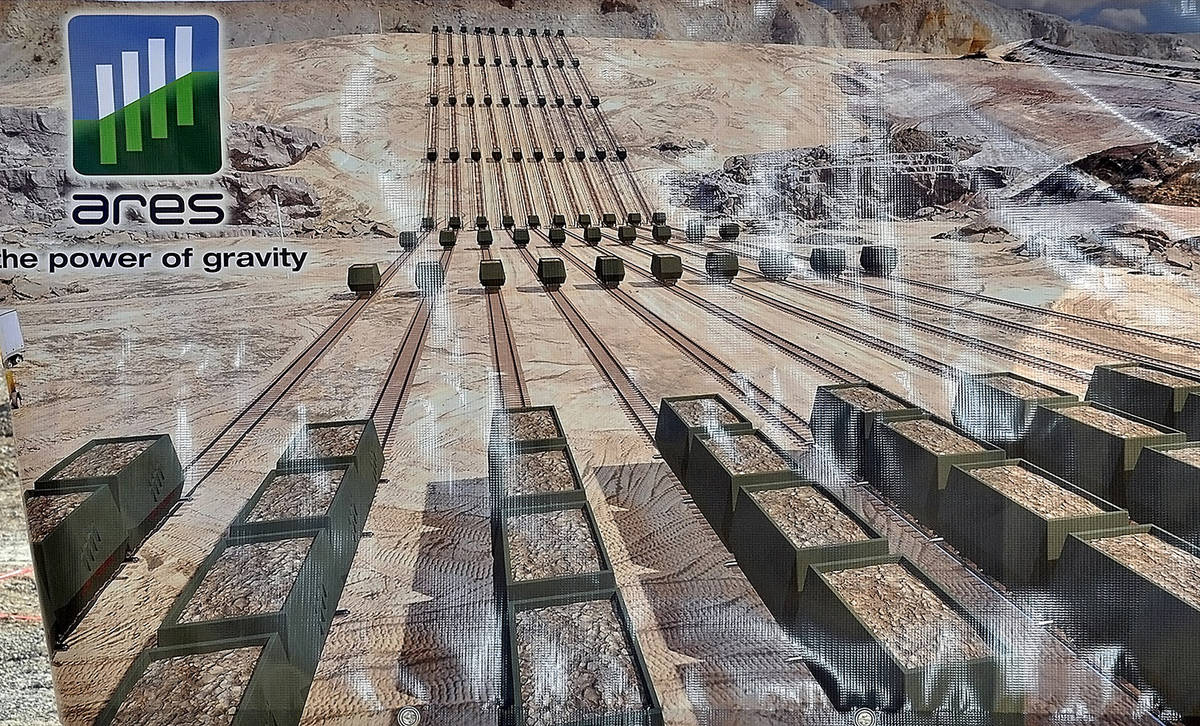 Horace Langford Jr./Pahrump Valley Times This photo shows an artist's rendering of the GravityLine rail system, which was on display during the recent groundbreaking ceremony for the project.

A project nearly a full decade in the making, ARES Nevada LLC has finally moved the first shovelful of dirt to kick off construction of its brand new energy storage project, the ARES GravityLine, located right here in the Pahrump Valley, with an official groundbreaking ceremony hosted on Thursday, Oct. 8 in honor of the occasion.

Originally planned to straddle both Nye and Clark counties, with the bulk of the system to be located in Clark, the project was recently redesigned for a more compact footprint on ground that has already been disturbed by construction activities. Rather than building on 106 acres of untouched Bureau of Land Management lands, the ARES GravityLine will now be located at the Gamebird Pit off Highway 160 just west of Carpenter Canyon Road, a gravel mine operated by local company Wulfenstein Construction.

As detailed on its website, the project will encompass roughly 20 acres and include a fleet of 210 mass cars, which are essentially train cars situated on a closed set of 10 multi-rail tracks. These cars will act as batteries, providing a storage solution for the electrical grid.

“While GravityLine is well-suited for long-duration storage at utility-scale, the application at Gamebird Pit will be as a regulatory resource providing ancillary services for the California Independent System Operator (CAISO),” the news release states.

“While we have made significant steps forward in renewable energy generation, it is clear utilities and independent power producers alike need a diversity of energy storage solutions. Cost-effective and scaleable while non-flammable and water-less, ARES GravityLine is that solution,” ARES CEO Howard Trott stated of the project. “The first ARES GravityLine facility and future projects will create much-needed storage capabilities helping to avoid blackouts and shutdowns while keeping power prices affordable. We are thankful for the tremendous support of the Wulfenstein family, the Nye County Commission and staff who are collaborating closely with us to make this first facility a reality.”

According to the press release, ARES Nevada will strive to use local contractors, manufacturers and suppliers to the greatest extent possible while constructing the GravityLine, and all components will be made right here in the U.S. Construction will also reportedly create approximately 30 direct jobs.

Once all necessary permits have been secured, ARES Nevada is aiming for construction to commence before the end of the year. Potelco, a Quanta Services company, has been selected as the engineering, procurement and construction contractor.

“I’m pleased a portion of the mine our family has owned and operated since the late 1980s can be reclaimed through a process that benefits the future of energy,” Jim Wulfenstein was quoted as stating. “Helping launch a new economic base for Pahrump and the surrounding community while mitigating a global problem, we look forward to working closely with ARES to develop this facility.”