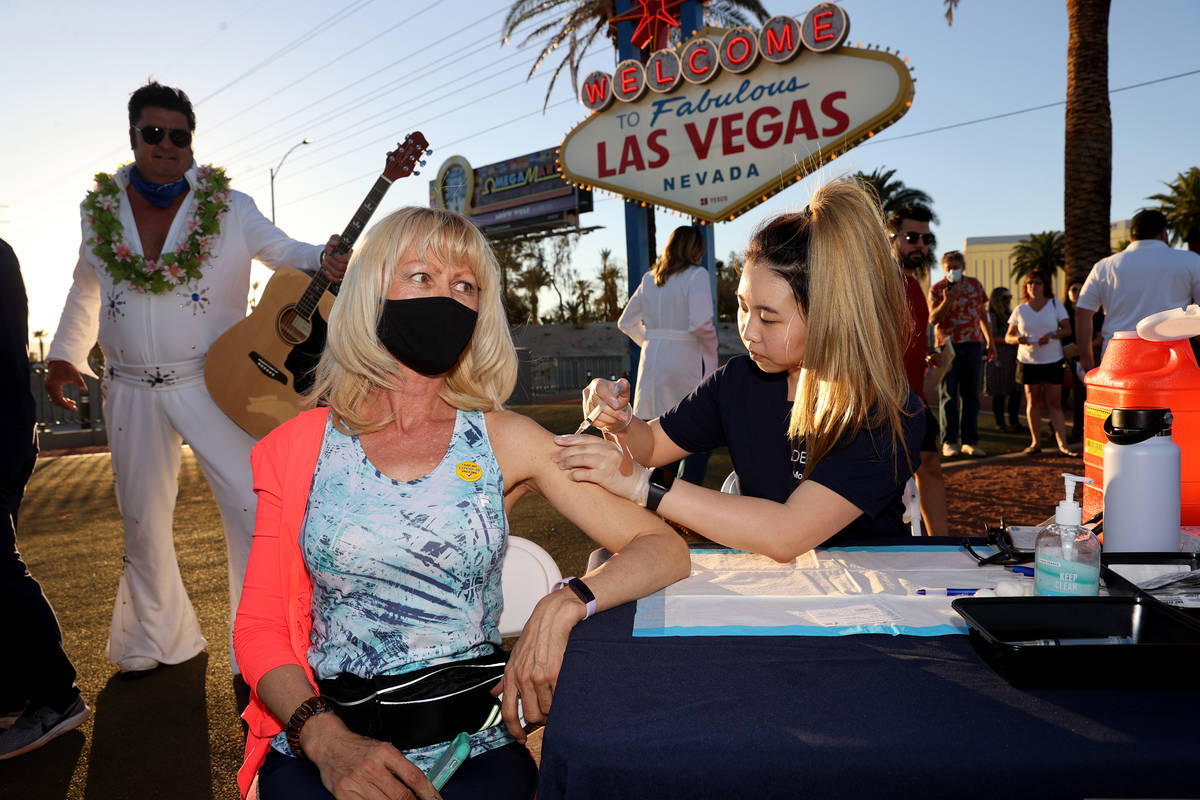 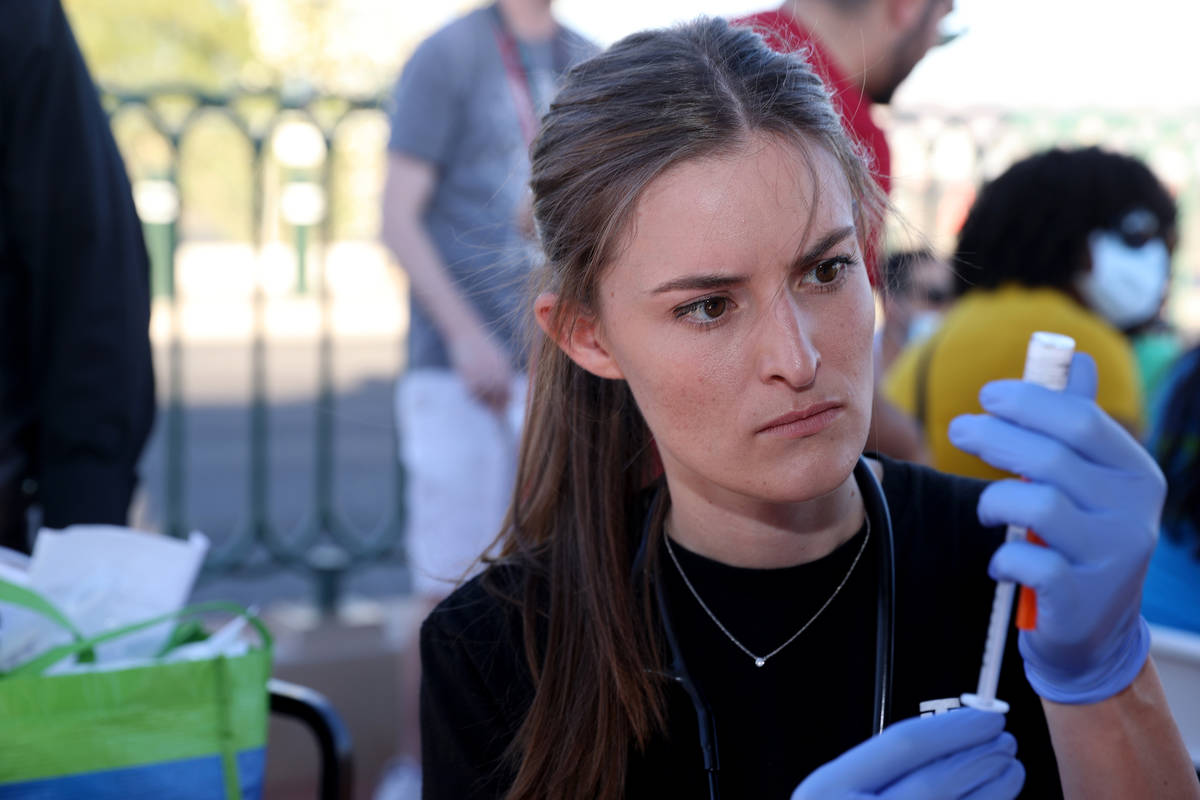 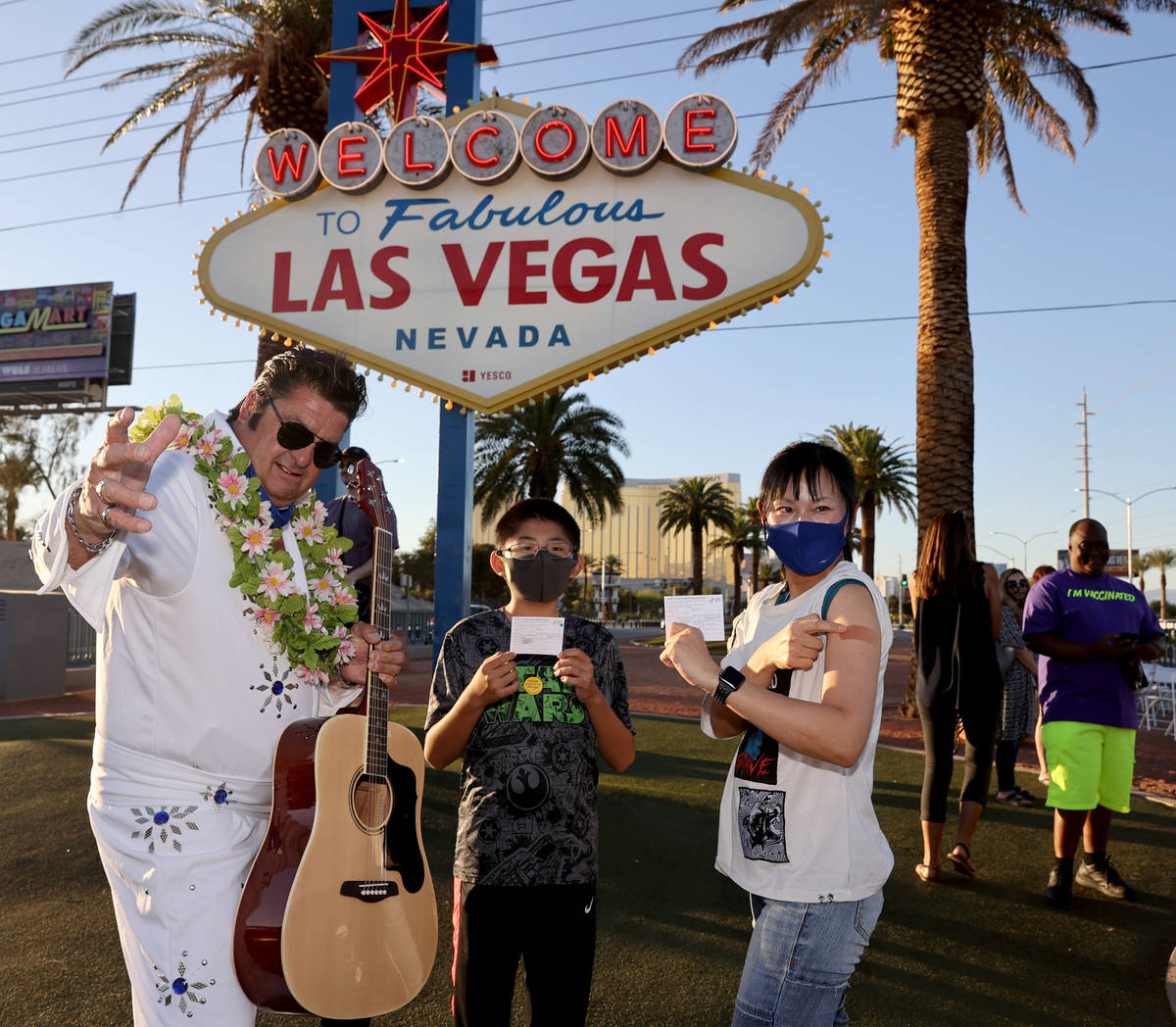 Elvis impersonator Mark Edward Rumpler poses with Izumi Kimoto, 44, and her on Joe, 12, after they received their COVID-19 vaccines at the Welcome to Fabulous Las Vegas sign on the Strip in Las Vegas Monday, May 24, 2021. (K.M. Cannon/Las Vegas Review-Journal) @KMCannonPhoto

Gov. Steve Sisolak is expected to announce within days that Nevada will join a growing number of states in offering “exciting” prizes to get more people vaccinated against COVID-19.

Nevada’s program will be “pretty innovative” and “a little different than what the other states’ have been,” the governor said last week, according to KVVU-TV, Channel 5.

“And it’s exciting,” the governor added, hinting that an announcement might come “within five to seven days.”

Nevada Rep. Dina Titus, who last week filed a bill to create a national vaccination lottery with $1 million prizes, also suggested a plan was in the works on Thursday.

“Nevada has a constitutional prohibition against the lottery, but I know that our governor is working on some creative way to provide incentives,” she said.

The comments came as states including California, Oregon, New Mexico, Colorado and Washington have followed Ohio in launching lotteries with million-dollar cash prizes to bolster the numbers of vaccinated people in their states.

For now, the Nevada program remains under wraps. “When more information is available, it will be announced,” Meghin Delaney, a spokeswoman for the governor’s office, said in an email on Monday.

The idea of a “raffle” was mentioned at an online meeting of the state’s COVID-19 Mitigation and Management Task Force on May 20.

Under the proposal, “any Nevadan regardless of immigration status who is fully vaccinated by July 4 or another chosen date would be eligible,” Karissa Loper, a bureau chief with the Nevada Department of Health and Human Services, told the group.

“That’s an idea we are working through right now,” Loper said.

It’s unclear how a statewide raffle would be structured differently from a lottery.

States have begun to resort to million-dollar giveaways as vaccination rates are declining across the country.

In Nevada, average daily vaccination rates have declined from a high of 25,000 in mid-April to about 6,000, according to the state’s online dashboard. Cases of the coronavirus also have dropped, though there still are about 200 COVID-19 hospitalizations across the state and an average of two people dying each day from the disease.

Given the threat still posed by the virus, medical ethicist Arthur Caplan said he was OK with lotteries and other incentive programs, despite some qualms.

“I don’t have any ethical heartburn with a raffle or giveaways or free meals or free beers or tours of the stadium or free tickets,” said Caplan, founding head of the Division of Medical Ethics at the NYU School of Medicine.

“Wasting money with rewards and bribes does bother me, but I’ll live with it,” he said. His qualms “wouldn’t stop me from trying these tricks because we’ve got to get this vaccination done before some (virus) strain pops up and sends us back into complete misery again.”

But Caplan noted it remains to be seen to what degree these incentives work.

“We’re running a giant experiment with no real collection of data,” he said.

Brian Labus, a biostatistician and epidemiologist at UNLV, agrees with Caplan on that point.

“If we knew what worked, we would do that thing. But we don’t,” said Labus, who has served as a medical adviser to Sisolak. “So we’re doing things that make sense that seem logical, but the only way we can see if they work is to, unfortunately, do them, and then down the road, see if it made a difference.”

There is some early data suggesting that big prizes are helping persuade people to get vaccinated.

Ohio was seeing a steady decline in vaccination rates when it announced its Vax-a-Million campaign, data on the Ohio Department of Health’s dashboard shows. The state announced May 13 that it would give away five $1 million prizes as well as five full-ride scholarships to state universities.

The overall uptick since the announcement represents an estimated 100,000 people who got a shot who otherwise wouldn’t have in that period, said Julie Swann, department head of industrial and systems engineering at North Carolina State University.

She bases her estimate on vaccination rates remaining flat, though it’s more likely that they would have continued to fall, meaning that the actual number is likely more than 100,000.

“That is a significant bump,” said Swann, an analytics and systems expert who advised the Centers for Disease Control and Prevention during the swine flu pandemic response.

In another crude calculation, spending $5 million to entice 100,000 people to get vaccinated amounts to $50 per person — a “bargain compared to many things that we spend money on” in health care, Swann said. This is especially true when you consider the deaths and hospitalizations that would have been prevented by vaccination.

And the marketing value of the big giveaways? Priceless.