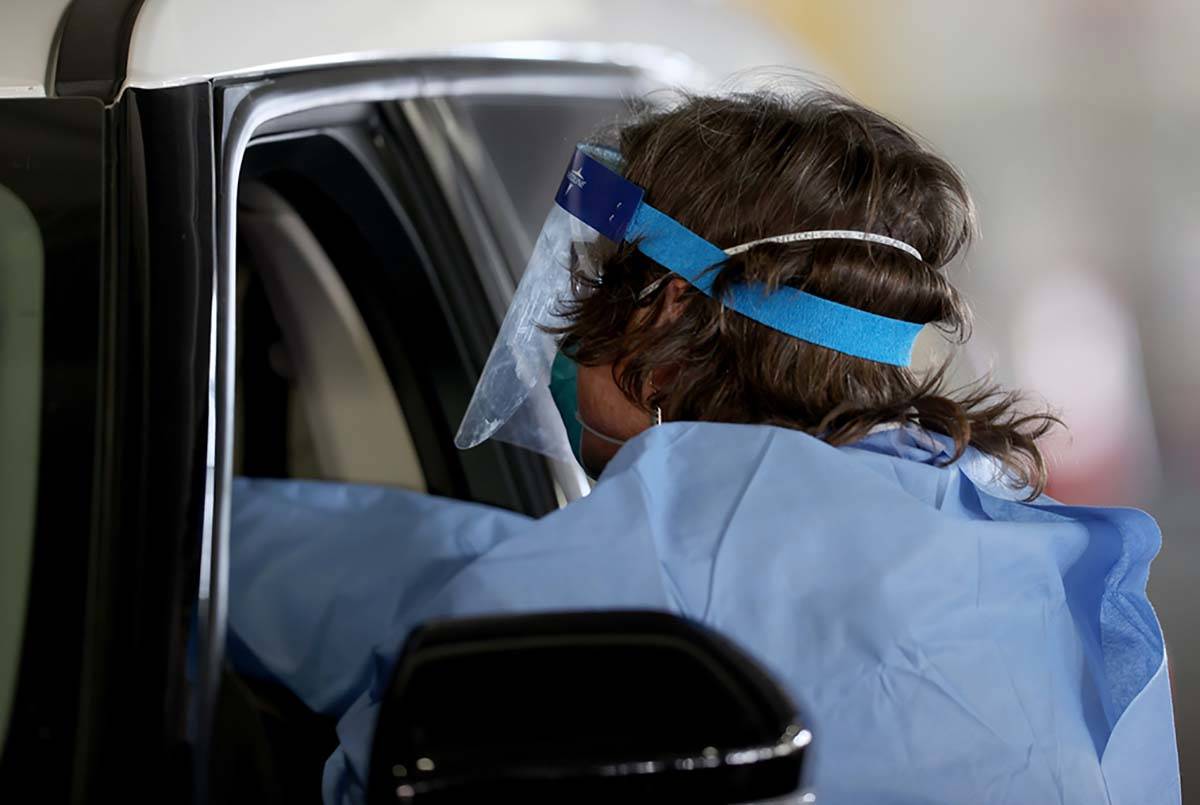 When asked this in mid-June about the record numbers of new cases of the coronavirus in Clark County and in Nevada, some national and local health authorities agreed on a few key points.

They agreed that the increases aren’t simply the result of more people getting tested and that reopening is playing a role in the spike, along with a certain amount of complacency regarding mask-wearing and social distancing.

Despite talk of a “second wave,” they agreed that the county and state are still seeing a first wave of the virus, one that hasn’t stopped.

Where the agreement ends is whether we’ve seen the worst of this first wave of infections.

Julie Swann, a professor who has advised the federal government on flu pandemic response, doesn’t think so.

“I think you’ve seen a ripple, and there’s a tsunami left,” said Swann, who served as a science adviser to the Centers for Disease Control and Prevention during the H1N1 pandemic.

The cumulative percentage of people testing positive rose by 0.6 percentage point, only the second increase since early May.

The pandemic, Swann said, could be stopped one of three ways.

One is that a “country gets complete control over the pandemic, with testing and tracing and such, like you’ve seen in Taiwan, New Zealand, Iceland, and other places,” said Swann, a professor and department head for the Edward P. Fitts Department of Industrial and Systems Engineering at North Carolina State University.

Another way is through a vaccine. There are hopes that a vaccine can be developed by the end of this year or early next year.

The third is through so-called herd immunity, when 60 percent or more of the population already has been infected, providing them with some level of immunity to the virus. But Swann estimates that less than 5 percent of Nevada’s population has had the virus, based on a rough formula that there are 100 to 200 cases for every death.

When half your friends have had the virus, “that’s how you know when you’re close” to herd immunity.

Many states so far have seen low rates of infection, with exceptions including New York and neighboring states. These states may have reached their peaks for this wave, with cases on the decline because more residents already have been infected and have some immunity.

In places where few people have been infected or have immunity, the virus can easily pass from person to person, Swann said. The closures of many businesses and restrictions on public life slowed but didn’t stop the spread of the virus.

People have forgotten that the aim of these restrictions was to flatten the disease curve, with no expectation of getting rid of the virus, said Karen Duus, an associate professor in microbiology and immunology at Touro University Nevada in Henderson.

“Flattening the curve” means avoiding spikes in illness so extreme that hospitals become overwhelmed by seriously ill patients, which is what happened in New York.

Whether the current spike in cases will turn into a larger trend depends in part on whether people are wearing masks and practicing social distancing, Duus said.

“It really depends on how careful everybody is being,” she said. “And I’m seeing an awful lot of people who aren’t being careful.”

She said she would be surprised to see business closures required again “unless our medical facilities get so overwhelmed that the powers that be decide people are going to be dying.”

Statewide, less than 70 percent of hospital and intensive care beds were filled as of Tuesday.

He pointed to the increase in the past two weeks in the number of people being hospitalized for COVID-19, which isn’t related to how many people are being tested but to how many are seriously ill.

He attributed the spike in part to reopening, but didn’t connect it to protests of police brutality where there were crowds of people who weren’t practicing social distancing.

“At this point really, we don’t have that information available, in terms of establishing a relationship between the protests and the increase,” he said.

He said although it’s “virtually impossible to forecast the behavior of the virus in the future,” he believes that changes in people’s behavior can change the course of the pandemic.

He is advocating for businesses to require patrons to wear masks in public areas to decrease the spread of the virus.

From strictly a public health standpoint, requiring the public to wear masks is a “no-brainer,” but there might not be the “political will” to do so, said Brian Labus, a member of the governor’s medical advisory team.

He said the state was closely monitoring the increasing numbers and would take appropriate action as needed, but could not say what action might be taken.

“If those numbers don’t drop back to what they should be, we’ve got a real problem,” said Labus, an assistant professor of epidemiology and biostatistics at UNLV’s School of Public Health. “Is it a bump in the road or is it a change in direction? I don’t think we can say yet.”

“It takes a little while to go from where we are now to that big peak,” Swann said. “And that assumes that nothing changes. If more people start wearing masks, then that peak shifts forward. It does depend on how many people take these additional (protective) measures.”

But based on the current trajectories, she’s expecting many states to see their numbers of new cases “going up, up, up.”