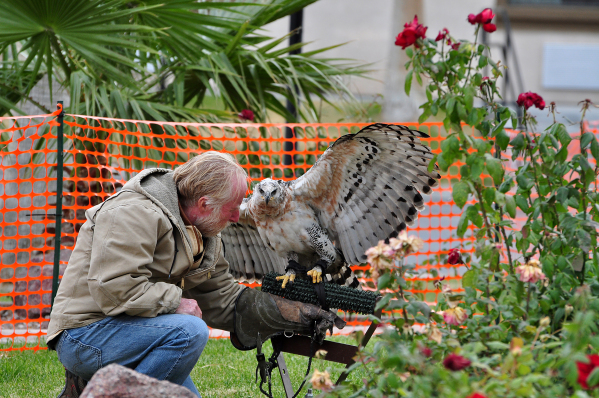 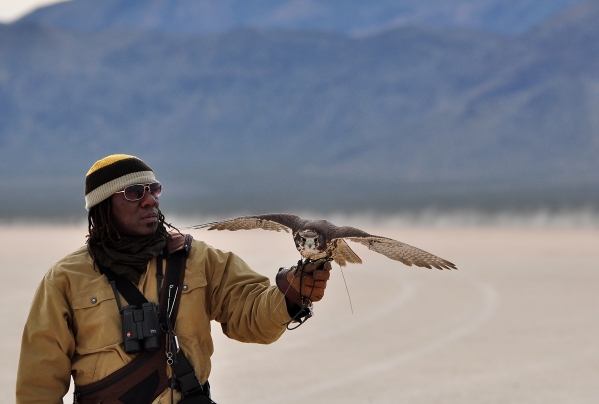 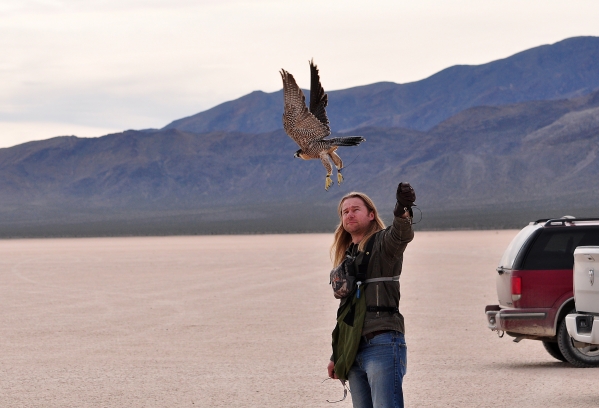 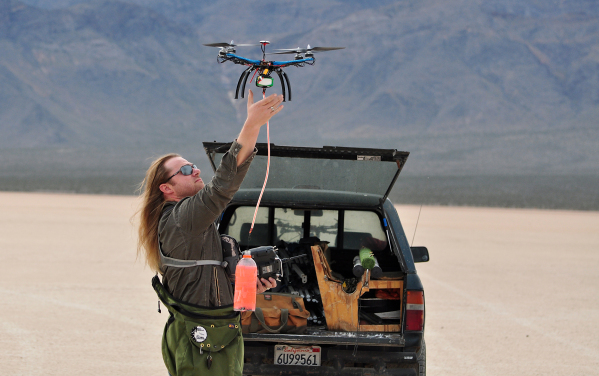 At first, 8-year-old Shawn Hayes watched in sheer horror as a Cooper’s hawk sat and eviscerated one of his pigeons he had raised, but as he watched for over an hour, eyes glued to the hawk, that horror slowly ebbed and turned to fascination. Hayes was hooked and has been an admirer of raptors and practitioner of falconry ever since.

Hayes is one of the leading experts of falconry in America and has been practicing the art for more than 30 years and has come to Pahrump for the Western Game Hawkers Classic, which he helped organize, to share his art with other falconers at the Pahrump Best Western. The group is here until Dec. 13 and will be doing a demonstration on Dec. 12 at the dry lakebed in Pahrump starting at 8 a.m. They expect to have as many as 80 people out to watch.

Merriam Webster defines falconry as the “art the art of training hawks to hunt in cooperation with a person.”

According to Hayes, falconry has been around for 6,000 years, when raptors were used to hunt animals.

“Back then it was an elitist sport, but not so much now,” Hayes said. “I have been into falconry since the moment that hawk tore into my pigeon. The practice of falconry when I was a child was almost non-existent in America when I was growing up. I had to go to the library to learn what falconry was and there were very little books on the subject. When I did find them, they were always checked out. Today the United States leads the world in this art.”

Hayes does not consider falconry a sport.

“I don’t call it a sport,” Hayes said. “To me, it is a way of life. It’s a practice. Falconry is so difficult in so many ways, but you can practice it. We are learning more and more about these birds. It’s not just about watching them kill. We brought the Peregrine falcon back from extinction.”

Hayes played a key role in reintroducing the endangered Peregrine falcon to the California skies while working with the Santa Cruz Predatory Bird Research Group.

For Hayes he enjoys the relationship he has with his birds.

Of course for an eight-year-old kid growing up in Riverside, California it was hard to get into this art without some outside help. It was just a fluke that led him to care for his first bird.

“A kid brought me a red-tailed hawk because he knew about my birds I had and knew I loved raptors,” Hayes said. “I was that kid, the one that always did reports on eagles. I took it and raised it and trained it myself. This was my first bird and my first introduction to falconry.”

She was young and was learning to hunt. Hayes said he read falconry magazines and would raise money to feed her, often going to the pet store to buy mice.

“If my pigeons died, I would feed her the birds,” Hayes said. “I even kept her in a cage, which is unheard of now.”

He said how he taught her to hunt and that was by trial and error.

The falconer said he lived near a gang-infested area as a kid and his friends were always playing football on the street at night until one day the gangs told them not to because there might be a drive-by shooting.

“My mother owned an old lot so we asked her if we could put a small football field on it,” Hayes said. “This meant clearing away the weeds. When I went to the field to do this my hawk would follow. When the field was flooded the gophers would pop up. My hawk was around and saw them and swooped down for the kill. After that, I would run around with five-gallon buckets and I would flush out gophers on all the vacant lots to feed my hawk.”

Hayes resides in Bishop, California and came to Pahrump to share his knowledge with fellow falconers.

“It’s a meet, and we do this to talk and exchange ideas about our practice,” he said.

Since he was a boy the practice in America has grown and has evolved.

“The sport is heavily regulated,” Hayes said. “You can’t just go out and buy a bird and start falconry. In order to do this, you have to first become an apprentice and learn from a master.”

According to Hayes, a person is an apprentice for two years and then it takes five years to become a master. He said a person even has to take a written test to get the permit to own the bird.

In the first days of falconry in America, birds could only be trapped after they had been on their own hunting in the wild.

“We had that rule because if the bird escapes, we wanted the bird to be able to fend for themself,” Hayes said.

He said the rules have relaxed and a person can get birds from breeders, but falconers still train their birds so they can be released into the wild.

He said this culture originally started in China and from there went to the Middle East, then Europe and finally to America.

“Now the practice has grown here and the best falconers come from America,” Hayes said. “It has grown here because of the available food for the raptors and wide open spaces. I traveled to the Middle East to exchange ideas with people there and they have no wild food for their birds. They killed all the small animals.”

Hayes spends hours sharing his wealth of information on raptors with fellow falconry experts and non-experts.

“I like to travel and share falconry with others and have also been to Africa, Russia and all over Europe,” he said. “It’s all about sharing knowledge and education. I even have shared information with pigeon racers, who hate us, but on a recent trip to the Netherlands I did some mending of fences.”

He said he shared his love with the pigeon racers there and told them he was for the preservation of raptor habitat and shared his love for raptors with them and now they are his Facebook friends.

A small group of 20 or so falconry experts from as far away as New York came to Pahrump for the weekend.

Among those here is Brian Evans, who has been into Peregrine falcons for 22 years.

“The Peregrine has come back from extinction and now has huge populations in cities like New York,” he said. “This is because of the common pigeon. Their populations have exploded in large cities and with it the Peregrine. Peregrines mainly eat pigeon.”

David Cannella is a falconer from Las Vegas who has decades of experience in the field and also helped organize the Pahrump event. He explained to the PVT about the training as Hayes released his prairie falcon for a demonstration at the dry lakebed in Pahrump.

“The drone took the bait up to around 300 feet,” he said. “Shawn will release his bird, and it will circle and then hit the bait.”

He said the bait hangs from the drone, which is attached to a parachute. When the bird hits it, the chute and bait are released from the drone and then the chute deploys. The chute is necessary to add drag, which forces the raptor to the ground.

Cannella said the recent drone technology has really allowed falconers to reach new heights in training the birds. Also technology has made it easier for people to find out more about falconry.

“Before drones, we used balloons and kites,” he said. “Drones allow us to take the birds higher. This is all part of their training, but this is also necessary to exercise the bird.”