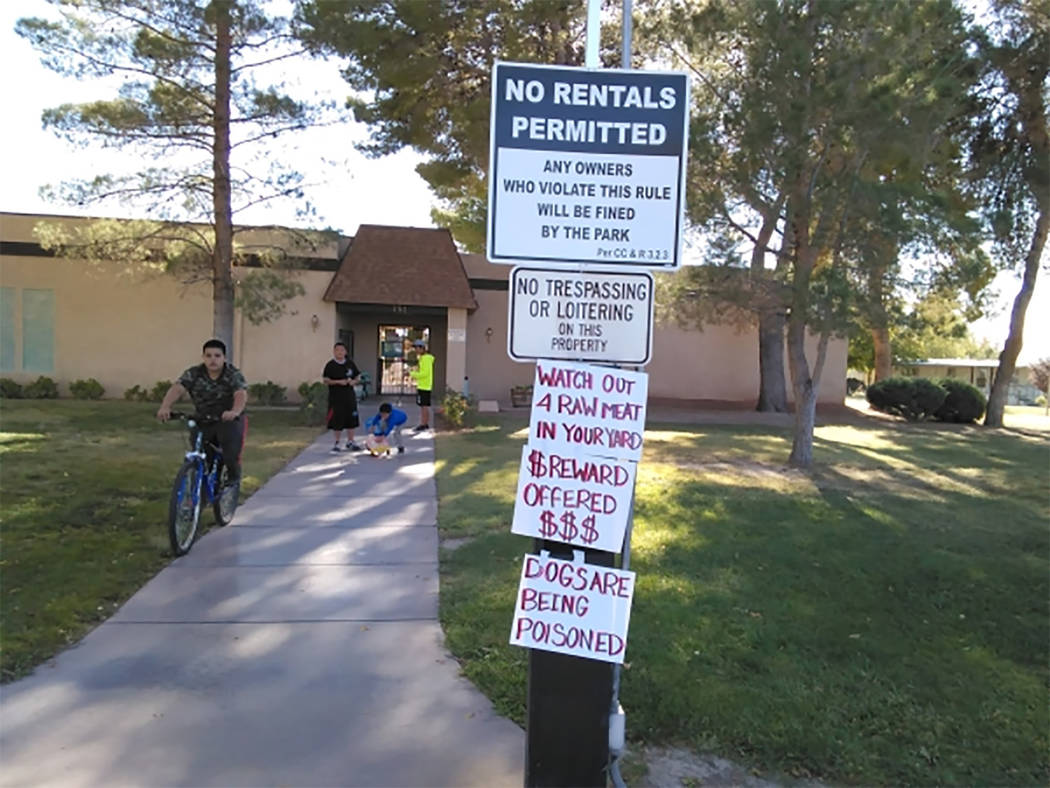 Selwyn Harris/Pahrump Valley Times Nye County Sheriff’s detectives continue their search for the person(s) responsible for a series of dog poisonings throughout the valley. The most recent instance occurred on Monday along the 2500 block of Ambush Street. This photo shows signs alerting people to the dog poisonings.

Nye County Sheriff’s deputies are investigating yet another report of a fatal dog poisoning in the valley.

The sheriff’s office issued a news release regarding a family’s dog who ingested poisoned meat along the 2500 block of Ambush Street on Monday, June 12.

The release stated a detective spoke to family members, who informed the detective that their pet was not acting like its normal self.

“Upon the detective making contact with the homeowner, the homeowner said his dog appeared to be a little sluggish on Sunday, June 11,” the release stated. “The homeowner further described the dog did not want to move, play, or even eat. Other observations included blood in the dog’s stool.”

Shortly after observing the odd behavior of the animal the owner took his dog to a veterinarian, where it was concluded by the veterinarian that the dog was indeed poisoned.

The poisoning is similar to a series of recent dog poisonings in the Comstock Park community roughly eight miles northwest of Ambush Street.

The sheriff’s office is still seeking leads from the public after several dogs were poisoned in that community.

On April 26, deputies responded to a local animal hospital after employees said at least five dogs were suffering from severe poisoning symptoms.

“The dogs’ owners are neighboring residents in the Bonnie Claire Street and Comstock Circle North area of Comstock Park,” a news release stated. “Two of the five dogs are since deceased and the remaining three are reported to be in critical condition.”

Detectives have coordinated that investigation with forensic specialists to determine the nature of the substances used to poison the dogs.

In 2015, a similar series of poisoned dog incidents was investigated in the same area of Comstock Park.

Detectives investigated a possible suspect at the time but were unable to affect an arrest.

The methods and location of this new series of poisonings, the sheriff’s office said, appears strikingly similar to the incidents which occurred in 2015.

Detectives are asking for the assistance from the public by reporting any suspicious people in the area.

Pet owners are advised not leave their animals unattended when outside and to check their yards for any foreign substances.

Regarding Monday’s Ambush Street poisoning, if captured, the suspect or suspects face several charges including throwing a substance injurious to animals in a public place, willfully or maliciously torturing, maiming, mutilating or killing a dog, cat or animal and intimidating or terrorizing another person.