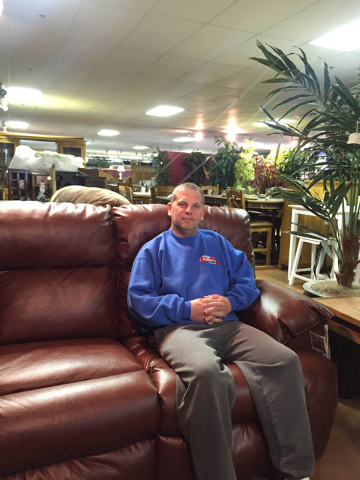 Despite closing down one of their retail spaces at the end of last year, Home Gallery Furniture is still going strong and are ready to celebrate their 15th anniversary this year.

The family owned and operated business, located at 950 Pahrump Valley Blvd., expanded to an adjacent building to up their retail space to a total of 20,000 square feet.

This expansion helped make up for the loss of retail space when Home Gallery Furniture closed their former location on East Highway 372 which they vacated this month, due to higher rent prices brought on by a new landlord taking over the shopping center.

“That whole shopping center went through foreclosure and a new owner took over and the rent was going to skyrocket,” said Michael Brunet, owner of Home Gallery Furniture. “So this was a natural move for us. A move we’ve been planning on for about three years, when we realized what was going on there.”

Turning what could have been a negative into a positive business ploy, the move allowed Brunet to lower overhead significantly and in turn, lower prices of merchandise by 13 percent to 25 percent.

Although a Nevada Department of Taxation report showed that taxable sales at furniture and home furnishings stores in Nye County were down 10 percent in the first five months of the fiscal year, Brunet explained Home Gallery Furniture made financial strides during the economic downturn in the area.

“While others have posted decreases, we’ve actually posted record numbers equivalent to that of 2006,” Brunet said.

“We got a tremendous response from the community during our store closing events,” Brunet said. “We posted record highs in sales.”

Being at both locations for the past 15 years helped limit the confusion that might be brought on by switching spots. The biggest obstacle for Home Gallery Furniture to overcome was the actual moving of the physical inventory.

Now that the store is settled in after the move, Brunet can look to the future and focus on giving his customers more options than before in all facets of the business.

“Going forward plans are to increase stock levels to operate even more efficiently,” he said. “Offer extended hours, lower pricing and greater selection of products. We now stock most of our items for immediate and free home delivery.”

With their big anniversary milestone on the horizon in September, Brunet said the company is as focused as ever on satisfying Pahrump Valley’s home furnishing needs.

“We’re proud to be serving the Pahrump Valley for our 15th year anniversary,” he said. “The community has responded very well and we want to thank the community for their continued support.”