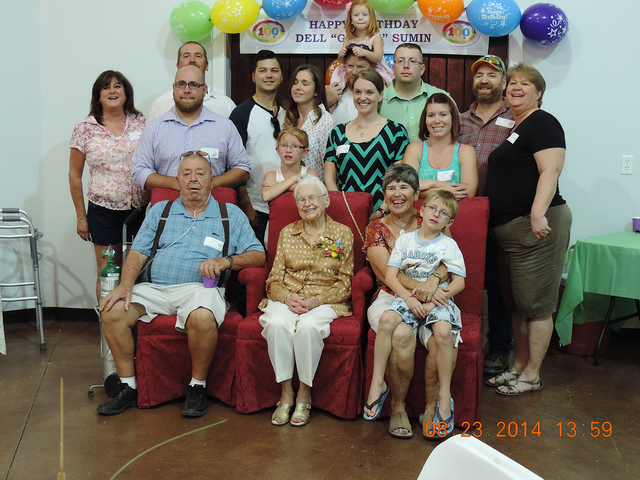 On Saturday, the native Nevadan was surrounded by several dozen family and friends for the centenarian’s milestone birthday.

Still sharp as a tack, Sumin said she knew her family was planning a party, but she was not aware that family members from across the country would be joining in the celebration.

She credits her mild lifestyle and fact that she practiced yoga for many years to her longevity.

“I worked hard, took care of myself and did yoga. I don’t do yoga anymore because my doctor would probably have a fit if he saw me throwing my legs over my head. I didn’t smoke, I never had a drink of coffee or alcohol and I have taken care of my body,” she said.

Additionally, Sumin said that she remained quite active throughout her life.

“I feel just wonderful and I’ve been really, really active. I’ve done lots of volunteering both here and in Arizona. I lived in Arizona for 25 years during past winters. I worked at the Phoenix Library of the Blind, over 10,000 hours,” she recalled.

She decided not to go to college and instead married her sweetheart in 1934. She and her husband worked at a filling station for more than two decades. They tied the knot in Winnemucca.

“My husband and I worked at a Texaco station for about 22 years. We worked side by side at the gas station. I pumped gas and took care of the books,” she said.

Sumin arrived in this world the same year Charlie Chaplin made his debut in motion pictures. It was the year President Woodrow Wilson was getting the country prepared to enter World War I and Babe Ruth made his major league debut with the Boston Red Sox.

Not surprisingly, she said she’s not all that impressed with modern technology. She says she’s never emailed anything to anyone.

“I think it’s awful because it ruins our interaction with one another. People don’t really get together as much as they use to. They don’t talk face to face like you and I are talking. It’s just rude. I’d rather go back to using smoke signals,” she said with a chuckle.

As far as pop culture when she was growing up, Elvis Presley and the Beatles were not exactly her “cup of tea.”

“I was kind of before them. I liked Guy Lombardo and the Mills Brothers. I still have an autographed copy of a Guy Lombardo record. We used to go from Battle Mountain to Elko where they performed,” she said.

Though Sumin’s husband Donald passed away in 1994, she remains surrounded by several generations of loving family members.

Traditionally, in the United States, centenarians receive a letter from the president congratulating them for their longevity. NBC’s Today Show has also held a tradition of naming new centenarians on air since 1983.

Centenarians born in Ireland receive a €2,540 “Centenarians’ Bounty” and a letter from Ireland’s top elected leader, even if they reside abroad.

Sumin, who was born August 22, 1914, noted that the greatest gift of all this year was simply enjoying her birthday with loved ones at Sanders Family Winery on Saturday.

At her age, it’s the little things that count the most.