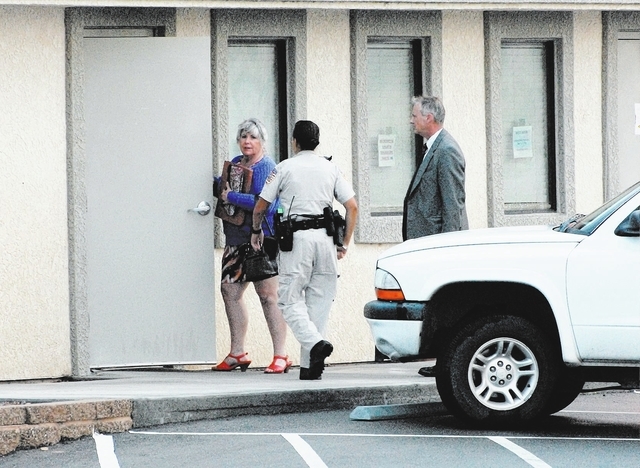 Nye County’s tax assessor found herself in the middle of an unfolding FBI investigation Wednesday.

The computers in question were ones used by Assessor Shirley Matson in her official capacity, she confirmed to the Pahrump Valley Times.

Sources tell the newspaper that an assessor’s office employee caught Matson early in the day Wednesday with a piece of mail addressed from the county’s human resources office to the FBI’s Las Vegas field office. The package consisted of a computer disc containing employment records for Dan Ellis, a sheriff’s deputy fired from his job earlier this year after an investigation revealed he allegedly Tazered a jail inmate multiple times without just provocation.

An unnamed county employee reported that Matson retrieved the disc from the county’s outgoing mail and took possession of it for several hours. The employee allegedly contacted the county HR office, which in turn alerted the district attorney’s office. Matson was later seen dropping the disc off at the local post office after the county’s mail had already been picked up.

A source tells the PVT that postal inspectors retrieved the disc and that it appeared to have been opened.

Matson denied tampering with the disc. She says she merely wanted to take the package to the post office herself.

“I was accused of having some FBI/County stuff on my two computers from a CD left (sic) addressed to the FBI left laying right in front of the general public which I hand-carried to the post office, the computer from home and the one in the office which they confiscated, have no such thing on them, so who knows when I will have them returned so I can do my job,” the assessor wrote in an email to the PVT.

Matson says she believes she is being set up by employees in her own office as well as top county officials. She specifically referred to District Attorney Brian Kunzi in her email to the PVT.

“I think what is happening is more of the same, false accusations and harassment. I would not be at all surprised to find out this is some sort of setup by the District Attorney,” she said.

Kunzi did not wish to provide a comment specifically about the FBI investigation. In fact, county officials were mum about the unfolding probe, save for a brief statement issued Thursday afternoon.

“Nye County can confirm county administration was advised of a potential issue involving the handling of mail. The county assessor admits to removing a letter addressed to the FBI from the county mail bin shortly before the mail was to be picked up by the postal carrier. Three hours later the county assessor went to the post office and deposited this letter in the drive-through mail box in the front of the main post office. Local law enforcement advised the FBI of the possibility of a compromise in the integrity of the evidence that had been requested by the FBI,” the county’s statement reads. “Nye County is exploring options to move the mail service to a more secure area to prevent any future breaches of the confidentiality of the mail. Nye County will not tolerate such a breach of public trust by any employee or elected official. Options to be taken in response to this breach are being considered by county administration.”

The assessor’s office happens to be a central repository for outgoing county mail. County offices that routinely have mail delivered from that location include the district attorney’s office, the sheriff’s office, county recorder, treasurer, clerk’s office and multiple courts. Much of the mail is confidential in nature, involving business issues, criminal investigations, court communications and the like.

Sources close to the investigation tell the PVT that the assessor was interviewed by the federal agents about opening the computer disc. She said she didn’t open it. When the agents informed Matson that lying to the FBI was a federal offense, the assessor said she needed to contact an attorney before answering any more questions. Asked to confirm that version of events Thursday, the assessor said the information was accurate.

“Yes, I was in complete shock … they starting (sic) making accusations and talking fast and I said I am going to call my lawyer and they backed off,” she wrote in an email to the PVT.

Attempts to reach an FBI spokesperson for comment — which typically consists of a standard “no comment” regarding ongoing investigations — were not successful by press time.

Sources close to the investigation tell the newspaper that after Matson was allowed to leave her office Wednesday evening, the two agents questioned her staff. Staff members allegedly told the agents that they feared Matson. Reports were also relayed that the assessor often comes into the office after normal business hours. Some suggested to the agents that Matson was even suspected of going through their desks when they weren’t there, and that she was convinced the assessor’s office was being bugged.

Cox confirmed that she has sometimes asked Matson for assistance on searching property records. Recently, the commissioner says, she’s enlisted Matson’s help in finding out whether the Corrections Corporation of America paid its share of money to the county as per the company’s development agreement for its Pahrump detention facility.

“I don’t understand what’s going on here, I haven’t heard a word about anything,” the commissioner said. “You have to understand, Shirley and I are friends. What we do on our own time is our own business. If it’s after business hours, that’s between her and I.”

When reminded that the question included being inside a closed government office after hours, Cox said, “Shirley works late hours. I work late hours. There’s times when I have people come and talk to me about county things at late hours.”

Cox says any records she and Matson ever discussed were public records to begin with and never confidential county records.

Commissioner Frank Carbone was said to have been among local officials to visit Matson after hours as well, though he said that wasn’t true when reached for comment. Neither Cox nor Carbone were aware of the FBI investigation until reached for comment by the PVT.

This is not Matson’s first brush with controversy.

In April 2012, she was found guilty of two counts of ethics violations and fined $5,000 by the Nevada Commission on Ethics. The commission found that she failed to commit to avoid conflicts between her private interests and those of the public, and used her position to intimidate, harass other officials and her own employees.

A recall effort to remove Matson from office failed in October 2011. In March of that year, controversy erupted when emails she sent to the sheriff’s office were leaked to the PVT. The emails suggested that Matson believed the Hispanic males then working at the construction site for the new county jail behind her office were illegal aliens. Private emails she wrote during her election campaign for assessor in 2010 then surfaced and those further painted Matson as a racist, which directly led to the recall effort against her.

Regardless of how the FBI concludes its investigation, the county may pursue its own action against Matson, including admonishing her publicly like it did in March 2011.