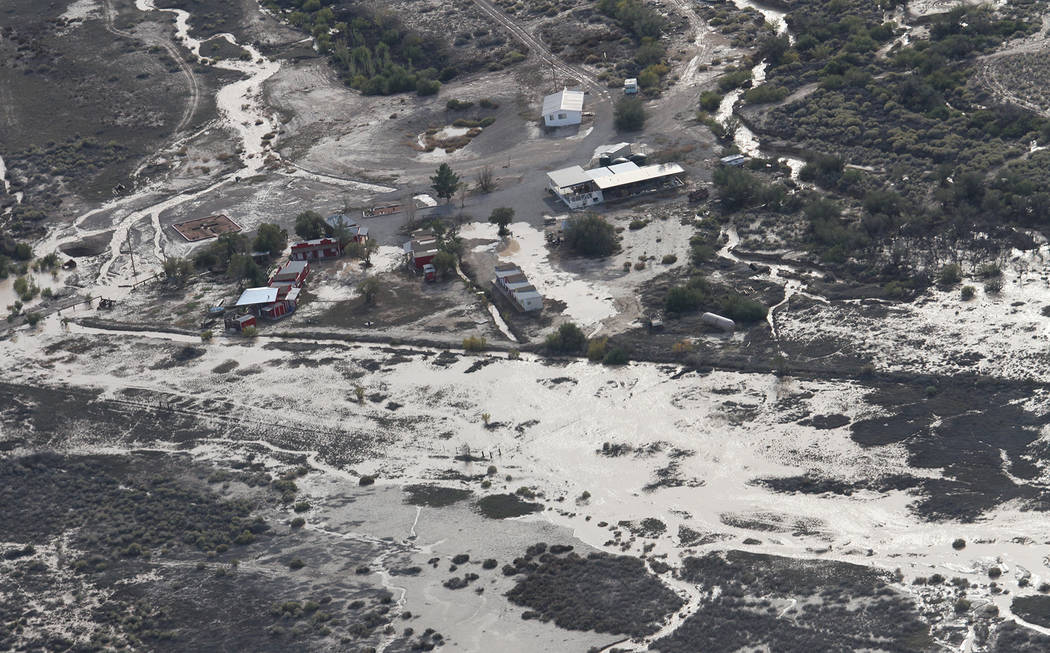 An aerial shot shows the flooded area around Ministerio Roca Solida’s property in the Ash Meadows National Wildlife refuge in Amargosa Valley. The U.S. Fish and Wildlife Service recently restored the flow of a small portion of the water to the property after the state gave the agency 90 days to return water to the property. Special to the Pahrump Valley Times

The U.S. Fish and Wildlife Service restored the flow of a small portion of the water to the property owned by Ministerio Roca Solida in Amargosa Valley.

In November, the state gave the Fish and Wildlife Service 90 days to return water to Ministerio Roca Solida, a private church ministry located in the Ash Meadows National Wildlife Refuge, after the investigation found several violations of the terms of the ministry’s water permits.

The issue originated more than 6 ½ years ago when the Fish and Wildlife Service diverted the creek away from the Ministerio Roca Solida where Victor and Annette Fuentes, the leaders of the ministry, had founded the Patch of Heaven church camp. The agency cited the need to preserve endangered species, including the Ash Meadows speckled dace that inhabit the refuge.

Joseph Becker, director of Nevada Policy Research Institute’s Center for Justice and Constitutional Litigation, who represents the Fuentes, issued a brief statement following the restoration of the creek.

“While Pastor Victor Fuentes continues his legal fight to have the desert spring-fed stream and his church camp restored to its pre-unlawful diversion conditions, he nevertheless welcomes the trickle of water now returned to his property via a small pipe and solar-powered pump,” Becker said.

Becker said that restoring a small trickle of water to the church’s property won’t fix the flood damage that has already occurred as a consequence of diversion of the water, nor will it prevent flood damage from occurring in the future.

Despite no previous record of flooding, the church’s camp has been flooded four times since the Fish and Wildlife Service diverted a stream which, prior to 2010, had traversed the church’s private property since at least as early as the late 1800s.

Becker repeatedly said that Fish and Wildlife officials moved the waterway without the requisite Clean Water Act permits being procured from the U.S. Army Corps of Engineers or approval from Nye County officials enforcing FEMA regulations.

In depositions taken pursuant to the lawsuits waged by Nevada Policy Research Institute’s Center for Justice on the church’s behalf, government witnesses have already testified that the artificial channel into which they diverted water was never designed or built to accommodate the amount of water flow historically carried in the water’s former path, Becker said.

In the meantime, Becker said Nevada Policy Research Institute’s Center for Justice will continue its legal fight against the United States in the U.S. Court of Federal Claims for the government’s taking of the church’s vested water rights along with a taking of the 40-acre property itself, “given the repetitive flooding which has occurred and is certain to continue as a result of the United States government’s illegal and ill-conceived action with the spring-fed stream.”

The U.S. Fish and Wildlife Service Southern Nevada did not return requests for comment by press time.