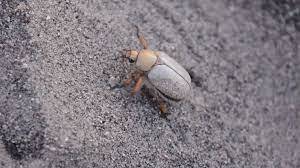 Special to the Pahrump Valley Times The Giuliani Beetle, which only lives in the Big Dune area in southern Nevada.

“This beetle is rare, and the fencing is to protect the population while still leaving the vast majority of the dune available to Off-Highway Vehicle activity,” said Joe Varner, Acting Pahrump Field Manager. “We are asking the public to continue recreating at the dune, but to please not use OHV vehicles within this fenced area.”

Visitors are still able to recreate on more than 95 percent of the dune, including the main dune system. The fence will help direct OHV vehicles away from driving on the smaller dunes that are critically important for the Giuliani’s Dune Scarab. The beetles live in these small dunes as larvae until they can pupate and come out as adults to breed, typically over a two-week period in April.

The fencing also will protect some of the plants the beetle feeds on throughout the year.