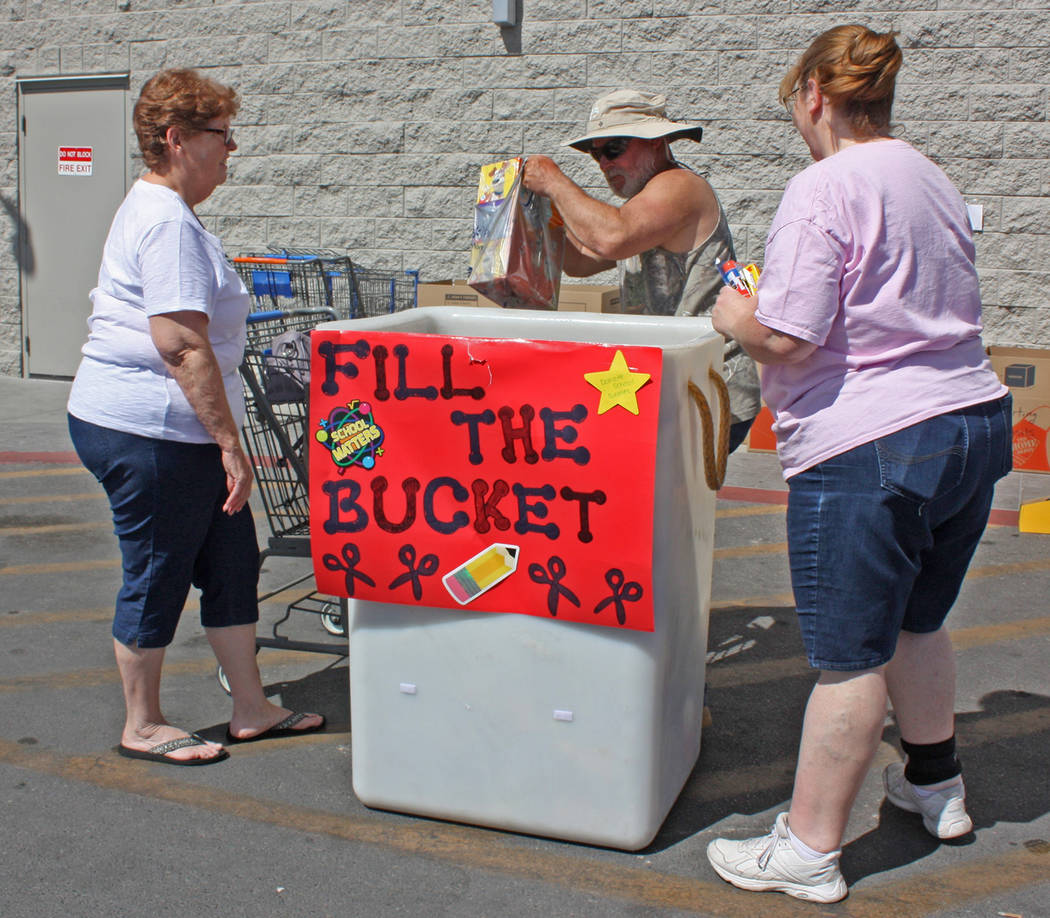 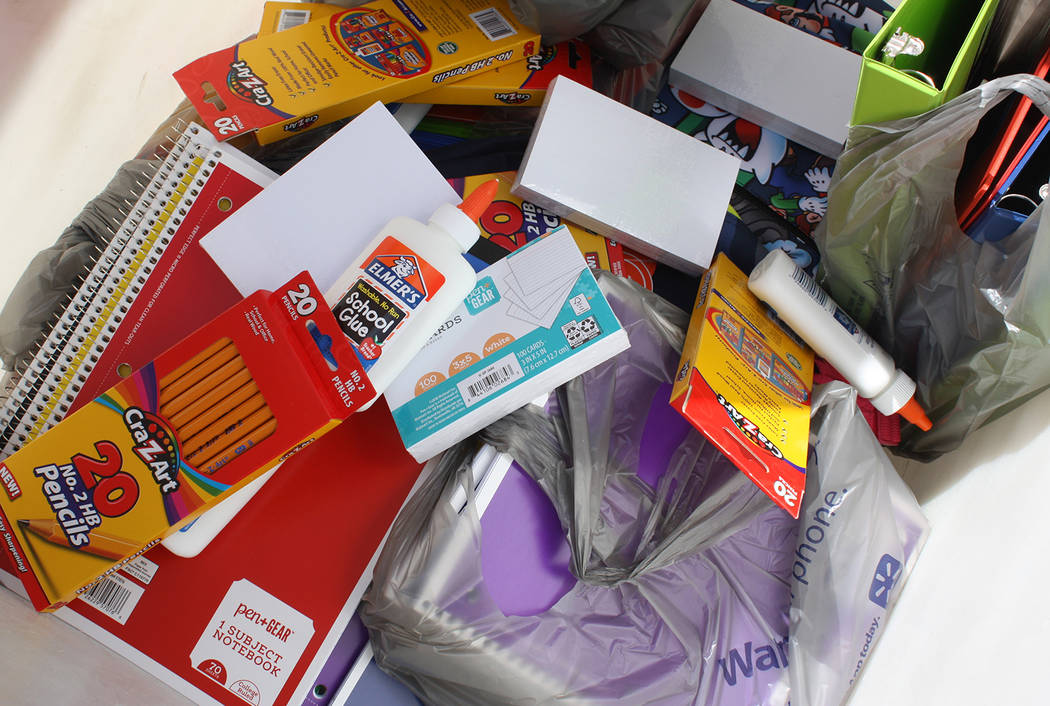 Robin Hebrock/Pahrump Valley Times Pencils and index cards, glue, folders and notebooks, a huge array of items made their way into the utility bucket truck buckets used as receptacles during the Fill the Bucket supply drive. 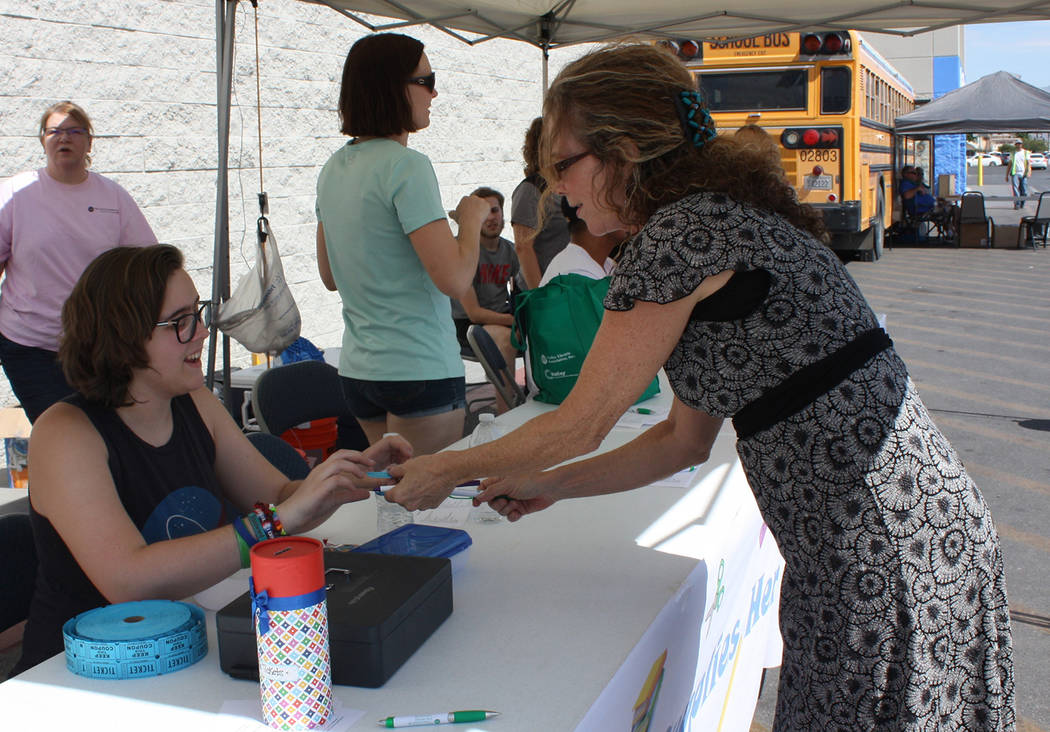 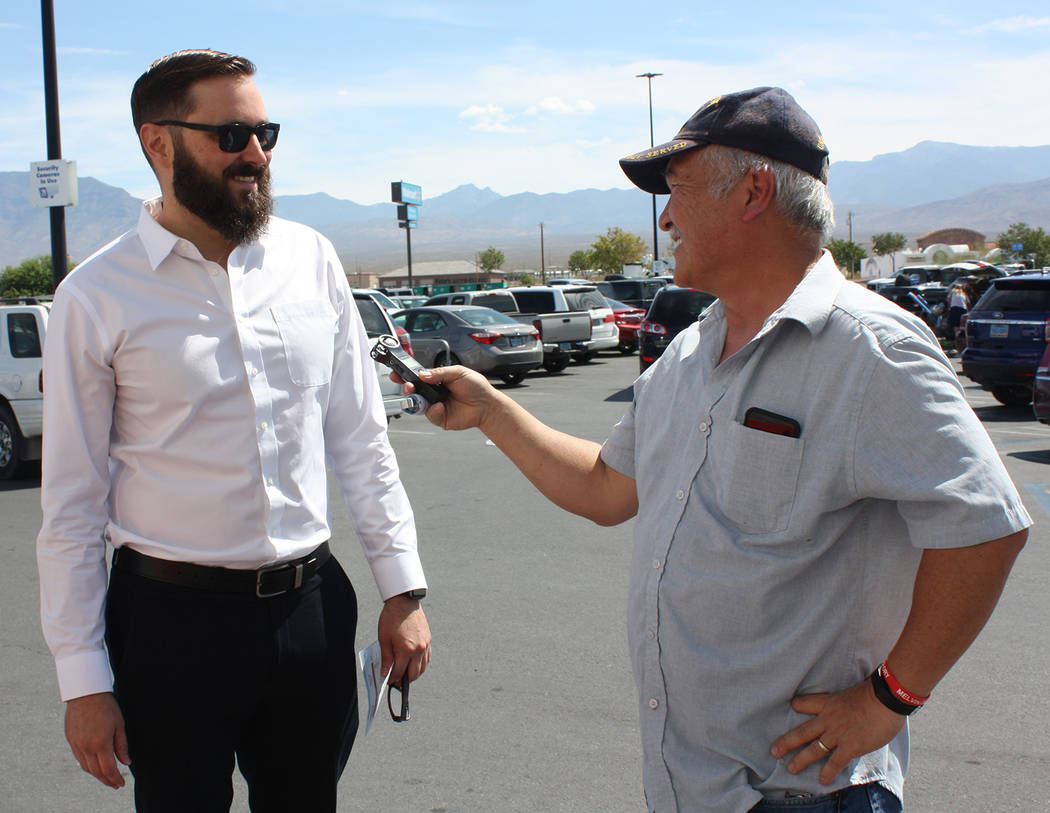 Amid another sweltering summer day in the Pahrump Valley, volunteers descended on three local stores, setting up booths and fans to combat the heat while they prepared to collect as many school supplies as possible during the 13th Annual Fill the Bucket School Supply Drive.

Starting at 8 a.m., volunteers worked steadily to gather and sort the many various items donated by all manner of people, with the young and old, residents and out-of-towners coming together in support of educational success.

Beth Lee, Valley Electric key accounts coordinator and an instrumental part of planning this year’s Fill the Bucket School Supply Drive, said the effort was once again a big success, bringing in much-needed items that will be distributed to the many schools that reside within the cooperative’s service territory.

This territory stretches more than 6,800 square miles of Southern Nevada and includes communities in Nye, Esmeralda and Clark counties.

“It was a wonderful event! The generosity of our community is truly overwhelming and humbling,” Lee enthused. “From employees volunteering their time, to tourists donating supplies, grandparents donating for their grandchildren, and everyone else who donated, the over 5,000 children returning to school in our service area this fall won’t have to worry about falling behind because they lack school supplies.”

Valley Electric Manager of Marketing Candace Perkins added that she couldn’t agree more. “Once again, our co-op and our community came together for school children in need. Between the generosity of our donors and all of our volunteers, children in our service area will have the supplies they need as they start the new school year,” Perkins said.

While the actual number of buckets of supplies collected this year was down, coming in at only 14 total filled that morning, the amount of cash donations was strong, with $6,000 helping bolster the event.

Perkins noted that the cash donations would be equivalent to approximately 12 additional buckets or a total of approximately 26 buckets for 2019.

As a way of thanking cooperative members for contributing to the school supply drive, donors were offered the opportunity to have their names placed in a raffle for power bill credits. Two lucky winners were picked at each of the three locations, all taking home power credits worth $25.

“We had so many notable and generous donors, they’re too numerous to name individually, but we send them all a tremendous and heartfelt thank you!” Perkins said brightly, adding, “Thank you to Walmart, Albertsons and Smith’s for allowing this event at their locations and thank you Nye County School District Transportation, it’s always fun to have the bus.

“Thank you to all the administrators and teachers from the various schools that came out and worked the event right alongside us, thank you to everyone in the community that made a donation and thank you to the VEA employees who were at the locations and who worked behind the scenes. Each and every one of you play an important part and this event is a success because of you,” Perkins concluded.

Esmeralda County students return to the classroom on Monday, Aug. 19.