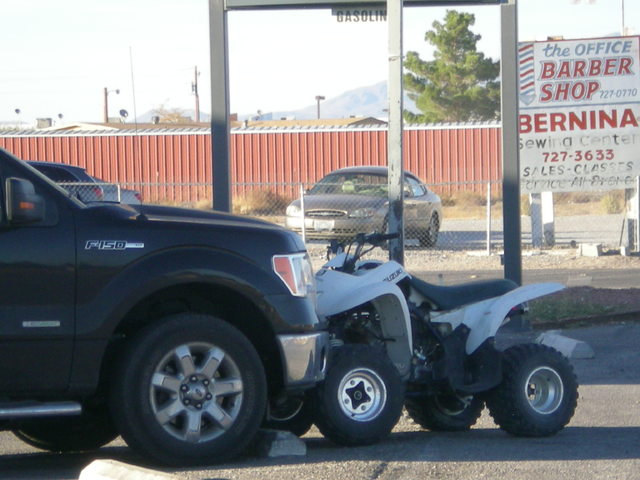 A quad rider was flown to UMC Trauma after a collision with a Ford F-150 pickup truck at the Shell gas station on Pahrump Valley Boulevard and Manse Road just before 5 p.m., on Wednesday afternoon. Fire Chief Scott Lewis said the patient sustained ‘multi-system’ trauma as a result of the crash. Vern Hee / Pahrump Valley Times 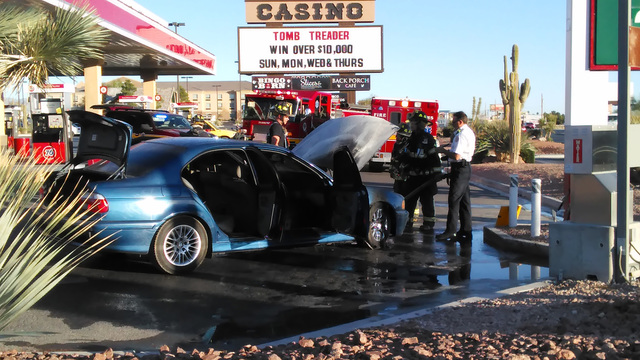 A quick-thinking driver managed to pull over safely after the car he was driving overheated and became engulfed in flames late Wednesday afternoon. All occupants escaped safely. Pahrump fire crews extinguished the fire within minutes. The interior of the vehicle appeared to be a total loss. Selwyn Harris/Pahrump Valley Times

An 18-year-old Pahrump man was transported to UMC Trauma in Las Vegas after a collision involving a late-model pickup truck at the intersection of Pahrump Valley Boulevard and Manse Road just after 4 p.m. on Wednesday.

“He had multi-system trauma from the impact and there was significant damage to both vehicles,” Lewis said. “Mercy Air 21 was brought to the scene where patient care was transferred to Mercy Air crews. The patient was flown to UMC Trauma in Las Vegas. I’m not 100 percent certain whether the operator of the quad was wearing a helmet.”

Shortly after clearing the scene, fire crews were summoned to Gold Town Casino for a vehicle fire.

Lewis said the owner of the blue BMW had recently purchased the vehicle.

“At the time, they were experiencing a mechanical issue with overheating,” Lewis said. “They were actually driving it to the mechanic when the car overheated to the point where the engine compartment was on fire.”

Lewis noted the quick-thinking driver was able to find a safe location to pull over where all of the occupants escaped with no injuries.

“They pulled into a safely located service station away from the fuel pumps and got everyone out of the vehicle,” he said. “911 was then called and upon arrival, we had a pretty moderate smoke condition presenting from the engine compartment along with open flames in the area of the dashboard and into the passenger compartment. The fire was quickly extinguished without incident.”