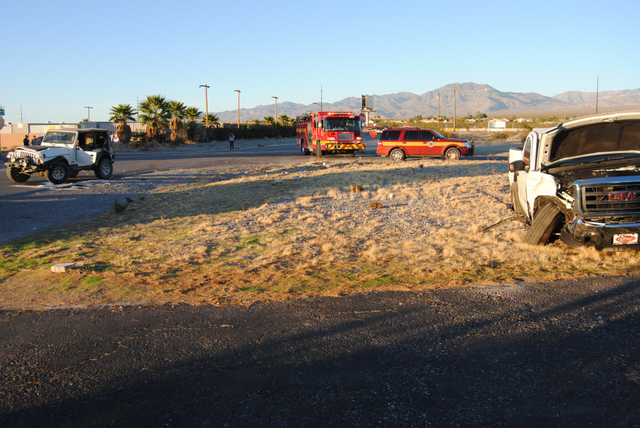 One person was flown to UMC Trauma in Las Vegas following a two-vehicle collision at the intersection of Alfalfa and south Dandelion streets just after 4 p.m. on Thursday. The second driver was treated at the scene and released. The exact cause of the crash is under investigation. Special to the Pahrump Valley Times 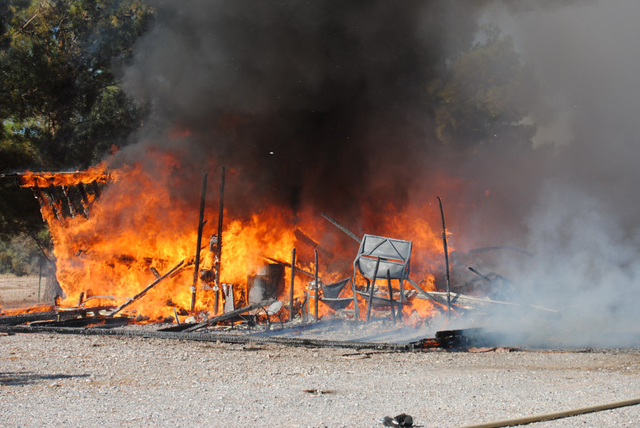 A garage and its contents were destroyed by fire at a residence on the 800 block of Flag Street on Friday morning . No injuries were reported. The cause of the fire is believed to be accidental. Special to the Pahrump Valley Times

Fire Chief Scott Lewis said crews were dispatched to the intersection of Alfalfa and south Dandelion streets just after 4 p.m., on Thursday, where one person was flown to a Las Vegas hospital.

“Upon arrival, we found a two-vehicle accident where it was a T-bone type of collision with a partial ejection of one of the occupants,” he said. “The scene size-up and patient assessment revealed that one patient required transport by flight. Mercy Air 24 was brought to the scene where patient care was transferred and that patient was transported to UMC Trauma in Las Vegas. The second driver was treated and released at the scene.”

Roughly two hours later, fire crews were summoned for another two-vehicle collision with injuries at 601 S. Highway 160, but both parties declined medical treatment.

On Friday morning, fire crews were dispatched to a residence along the 800 block of Flag Street for a report of a structure fire.

Upon arrival, Lewis said crews found a two-car garage that was fully involved in fire, where it extended to the primary dwelling on the property.

“The fire was contained to what we call the ‘alpha-bravo’ corner,” Lewis said. “It had extended to the side; however, forward progress of the fire was quickly cut off, but the garage and the contents were a total loss. There were also several explosions, including discharging ammunition as well as individual small propane tanks that were exploding within the garage. There were no injuries and all occupants were safe. The fire is thought to be accidental in nature and the investigation is ongoing.”

On Saturday morning, fire crews responded to a report of a vehicle fire on the 3600 block of West Blosser Ranch Road.

“Upon arrival, we found a van with fire within the passenger area,” Lewis said. “That fire was quickly extinguished with no extensions beyond the vehicle, and there were no injuries. That fire is thought to be accidental in nature due to a mechanical issue.”