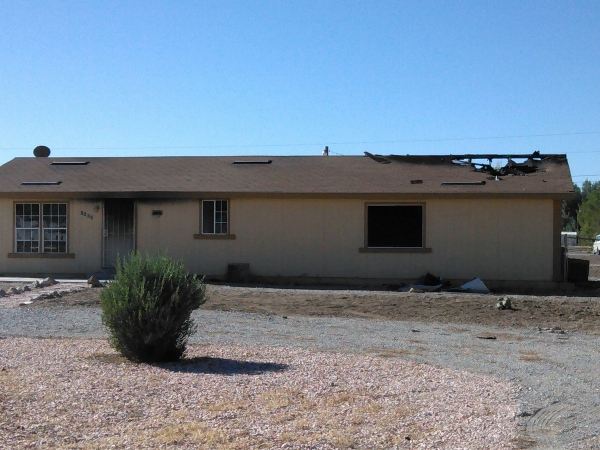 “As crews were responding, we were informed there was an explosion within the structure,” he said. “Upon arrival crews found a double-wide manufactured structure with fire showing through the roof on the back side of the house.”

Lewis noted there were heavy smoke conditions inside the home once crews arrived.

He also said the roof of the home became compromised as a result of the fire.

“I did a secondary size-up and found that the area of the roof had significantly widened where there was fire moving through the windows and up the roof,” he said. “We also observed fire from an open rear door extending down through the hallway and along the ceiling line.”

Due to the instability of the structure, Lewis ordered crews out of the home for their safety.

“Because the conditions were deteriorating in rapid fashion, and the heated conditions, we brought the interior team out for a few moments and performed an exterior knockdown and sent them back in where they were able to stop the fire in its tracks.”

Though the cause of the fire remains under investigation, Lewis said it appears to have started accidentally.

He also said all occupants were able to exit the home without sustaining injuries.

“It was an occupied structure with one adult and one child in the house and there was also a pet dog inside the house. The dog experienced a serious medical problem as a result of the fire but it is under veterinarian care and we were able to bring him out during that time.”

On a side note, Lewis also wanted to remind local residents of the burn moratorium, which is still in effect throughout the community.

“We have been getting a number of calls regarding people conducting unauthorized controlled burns,” he said. “The moratorium is still in effect and we are still in what is considered a high-risk factor for wildland fires.”