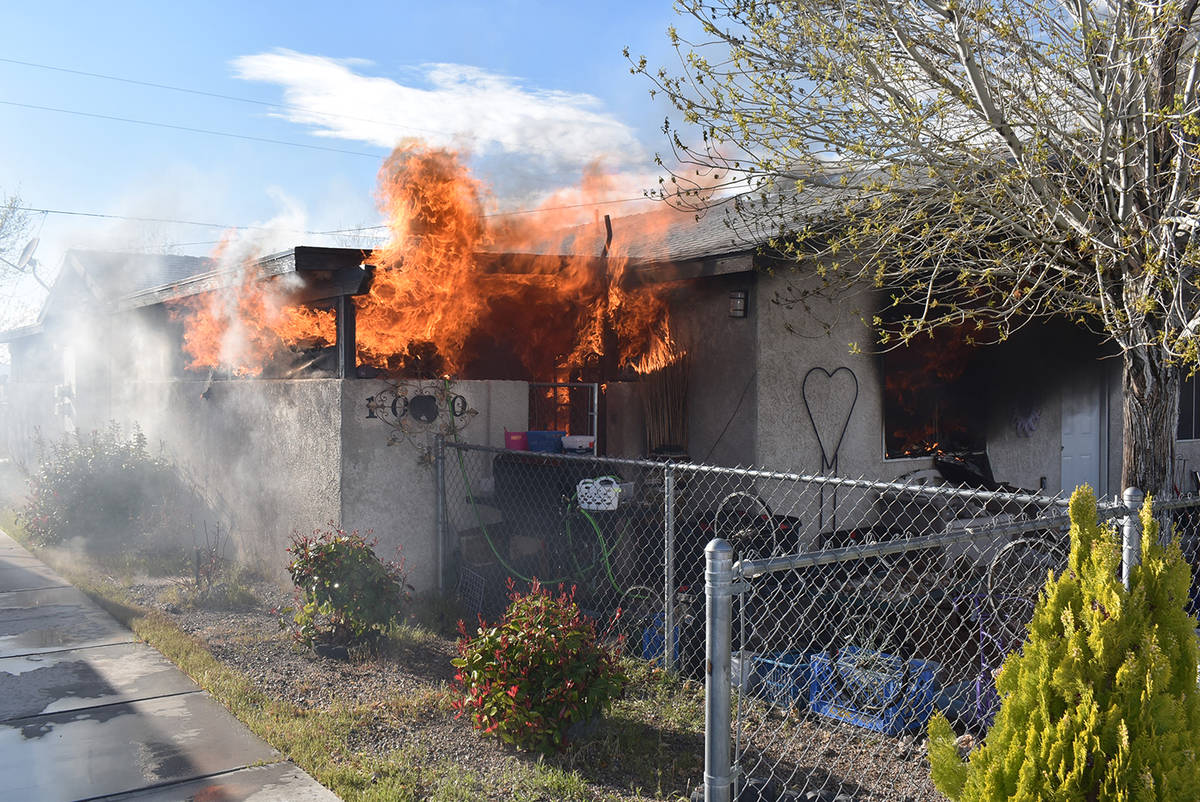 Special to the Pahrump Valley Times On Monday, March 16, fire crews were dispatched for a report of a structure fire with all occupants reported to be out of the structure, on Red Butte Street, just south of Highway 372, just before 5 p.m. One person received minor burns, but declined transport to the hospital. 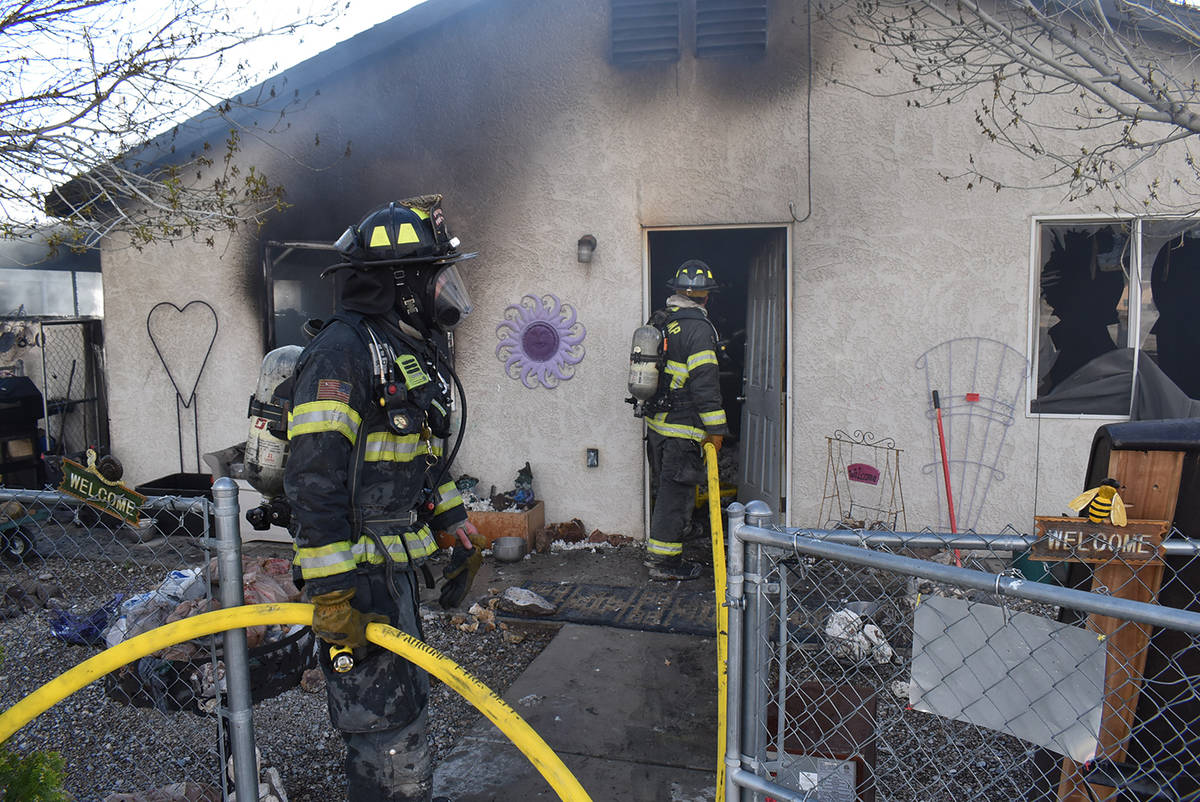 Special to the Pahrump Valley Times Pahrump Fire Chief Scott Lewis said during the scene size-up at the Red Butte Street fire, no one initially responded at the door, but it was later found that there were two kids inside the duplex structure who refused to answer the door because they were scared. 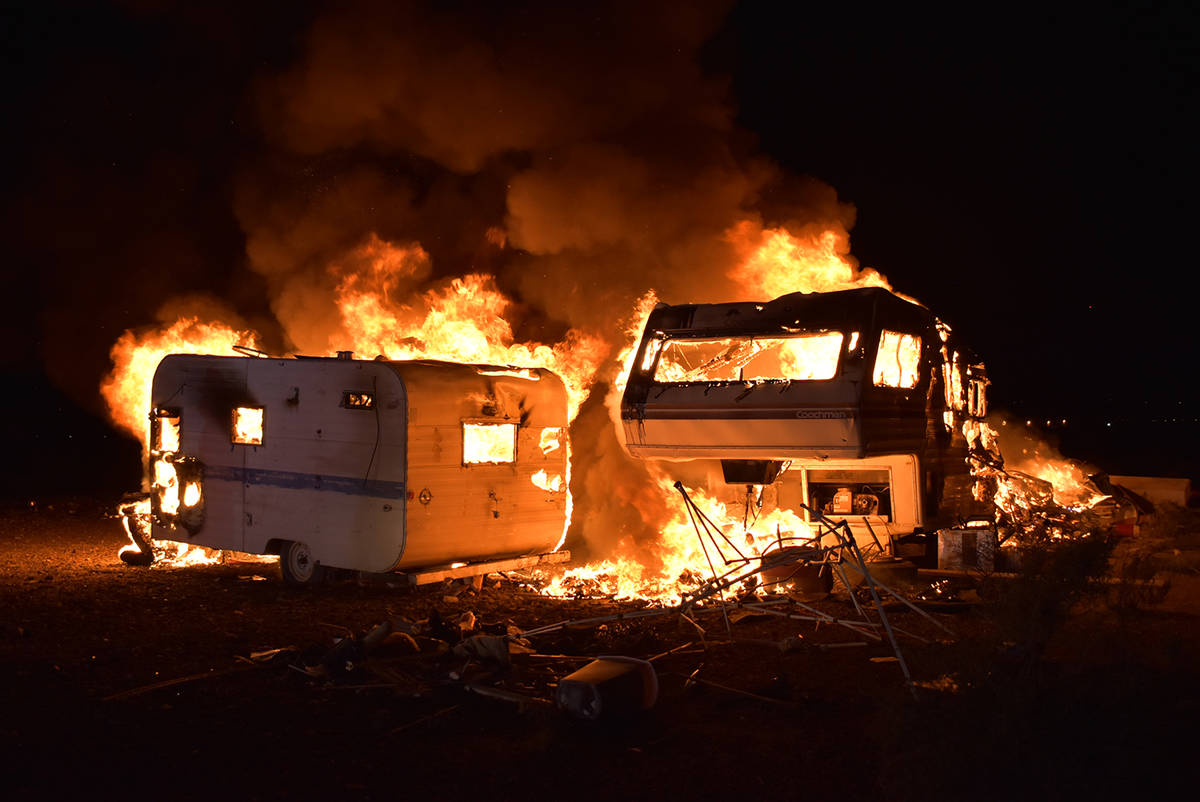 Special to the Pahrump Valley Times Several trailers attached together to form a single common trailer were destroyed by fire in the area commonly known as the homeless camp along East Wilson Road at approximately 7:45 p.m., on Friday, March 20, according to Pahrump Fire Chief Scott Lewis.

Pahrump Valley Fire and Rescue Services crews responded to a series of structure fires within the past week, with at least one fatality reported.

Fire Chief Scott Lewis said crews were summoned to a structure fire just after midnight on Friday, March 20, along the 900 block of North Barney Street.

“The initial report was that the reporting party arrived back at the property he was staying at and found the windows darkened and warm to the touch, and was unable to gain entry,” Lewis said.

Upon arrival, Lewis completed a scene size-up where he found nothing showing from the exterior of the home.

“I noted the same conditions of darkened, soot-covered windows and heat upon feeling the windowpane,” he said. “The reporting party said that he thought his nephew was still inside the structure. We then went into a rescue mode, and with two other firefighters we made a forced entry into the structure and completed a search. Firefighter Hernandez located a patient in a bathroom, where he and I subsequently removed the patient and carried him outside the structure where multiple rounds of CPR were performed. Unfortunately, after transporting the patient to the hospital, that patient was pronounced deceased.”

Lewis also said that it was undetermined how long the fire had occurred before the reporting party arrived home because there were no signs of fire or smoke from the outside of the structure.

“None of the neighbors or people driving by would have known there was a fire inside,” he said. “Due to the fact that it was a fatal fire, the deputy state fire marshal arrived at the scene, where he conducted an investigation. It is believed to be an accidental fire, originating on the bed where the occupant was unable to egress due to the fire conditions that ultimately self-extinguished after a period of time. The cause of the fire remains under investigation.”

Earlier on Friday evening, crews were dispatched for a report of a structure fire at approximately 7:45 p.m., on East Wilson Road.

Lewis noted that the initial investigation revealed that several trailers were attached together to form a single common trailer, in the area commonly known as the homeless camp.

“While our investigation revealed that the trailers were unoccupied upon our arrival, the sole occupant was accounted for without injury,” Lewis said. “Crews commenced a defensive exterior attack and quickly controlled and extinguished the fire. It should be noted that the area of the fire was extremely difficult for the larger apparatus to get to, due to the poor conditions of the road up in that area. Our brush truck was summoned in order to gain direct access to those structures. There were no injuries to any of the firefighters, and the cause of the fire is thought to be related to an unattended candle.”

On Saturday March 21, crews were dispatched to a reported passenger vehicle fire along the 4700 block of West Hardy Lane, just before 2:30 p.m.

Lewis noted that crews arrived on location and found a car fire in close proximity to a trike-style motorcycle, located at a one-story doublewide manufactured residence.

“Crews quickly controlled the fire with no further extension other than some heat damage to the trike,” he said. “There were no injuries and the cause of the fire was thought to be mechanical failure, as the vehicle had been returned to the house with a light on the dashboard indicating that there was a problem.”

Also on March 21, fire crews responded to a report of another structure fire along the 6500 block of South Vicki Ann Street at approximately 8 p.m.

Lewis said the initial report was a well-involved structure with a venting propane tank and discharging ammunition on the property.

“Crews arrived on location to find very serious conditions to consider,” he said. “Crews came in to do a quick defensive attack using a deck gun on top of the apparatus, using large amounts of water in a short amount of time where they cooled the propane tank from a distance, allowing firefighters to advance hand lines and finish the suppression. There were no injuries and the cause of the fire is thought to be related to an electrical situation, as there were recent issues within the structure. The use of space heaters may have also contributed to that. The cause of the fire is thought to be accidental in nature.”

Last week, Pahrump fire crews responded to yet another structure fire along the 2700 block of West Silver Sage Drive on Monday, March 16, at approximately 11:45 a.m.

“Crews arrived on location and found a fully-involved structure to the rear of the property,” Lewis said. “It was a former recreational vehicle converted into fixed-use storage, which was fully involved with a venting propane tank. The first charge was for the propane tank to be cooled so it wouldn’t explode.”

Lewis went on to say that crews quickly controlled the fire, with no further extension, by using a defensive exterior attack.

“The cause of the fire was a leaking propane tank that was sparked by an unknown ignition source on the property,” he said. “The structure was surrounded by an overabundance of personal property of all make and types. The cause of the fire is thought to be accidental in origin. One person was assessed but did not require transport.”

On the same day, at approximately 4:54 p.m., fire crews were dispatched for a report of a structure fire with all occupants reported to be out of the structure, on Red Butte Street, just south of Highway 372.

“Upon arrival, I found heavy fire showing from a one-story multi-family duplex,” Lewis said. “Command was established and crews commenced a modified interior attack where there was a quick knockdown of the fire extending out on the front porch. Crews then moved to the interior and halted the forward progress within, where they protected the rear attached occupied duplex.”

Additionally, Lewis said during the scene size-up, no one responded at the rear unit but it was later found that there were two kids inside that structure that refused to answer the door because they were scared.

“They were medically assessed and found to be uninjured, and were released to their parents or guardians,” Lewis noted. “The investigation revealed that a candle was knocked over and ignited a piece of furniture in the living room. There was a delay in notification, as they were attempting to extinguish it before calling 911. One occupant sustained some minor burns, but refused medical transport.