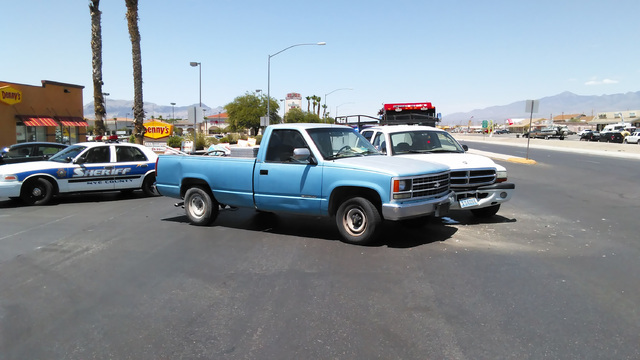 Multiple agencies responded to a two-vehicle collision along Highway 160 last Thursday. The crash, involving a town of Pahrump white Dodge work truck, sent at least one person to Desert View Hospital just after 1 p.m. The elderly driver of the blue Chevrolet pickup was cited by NHP. Selwyn Harris/Pahrump Valley Times

A town of Pahrump utility truck was involved in a two-vehicle collision along Highway 160 in front of Walmart where one person was transported to Desert View Hospital last Thursday.

The initial investigation revealed the driver of a blue Chevrolet pickup was attempting to turn left onto the highway and struck the passenger side of the southbound white Dodge Ram utility truck.

Upon arrival, we found both vehicles in the northbound lanes, he said. There was no entrapment, but one patient was transported to the local hospital.

Later that day, fire crews were dispatched to the area of Bell Vista Road near the Ash Meadows turnoff at approximately 7:30 p.m., for a fall victim, being transported in a personal vehicle.

Our medic crew met up with them and found that that patient warranted flight, Lewis said. We established a landing zone on Bell Vista Road and transferred patient care to Mercy Air.

We were dispatched for a report of a brush fire on BLM land near the area of Blagg Road, Lewis said. Upon arrival, crews found less than an acre of mesquite along with additional mixed fuels. There were no immediate exposures and the fire was extinguished by Pahrump Valley Fire and Rescue resources. BLM officials were notified.

That particular fire was observed around 10:22 p.m., Lewis noted. We diverted several resources to the additional assignment and upon arrival, crews found less than a one-acre brush fire. There were no extensions and no one was in the immediate area. Crews extinguished the fire and BLM officials were also on location. Both fires are deemed suspect and are being investigated by federal resources.

Last Monday, fire crews were summoned to the 400 block of Bellville Road for what was initially reported as a structure fire just after 2:30 p.m.

Upon arrival, we actually found a trash receptacle fire that had extended to an exterior porch, Lewis said. The fire was found to be extinguished upon our arrival.

The following day, fire crews responded to a vehicle fire along Highway 160 near Walmart just after 1 p.m.

A medic unit who had returned from a previous call, came upon that vehicle fire in the northbound lanes, Lewis said. Fire crews responded and extinguished the fire with no further extensions. No injuries were reported and the fire was thought to be caused by mechanical failure.

Four occupants of a residence on Sutton Drive were evaluated by medics after a man tried to remove a female boarder by using a toxic substance in the homes swamp cooler last Thursday.

Lewis said crews were dispatched to the 1700 block of South Sutton Street where the level of toxins within the home were determined to be hazardous to all occupants there.

The house was evaluated and found to contain airborne contamination, Lewis said. After checking the atmosphere within the dwelling, we ventilated it and several people were medically evaluated. The substance was a brand name pest control.

Nye County Sheriffs deputies were also summoned to the home where the man was taken into custody on willful poisoning charges.