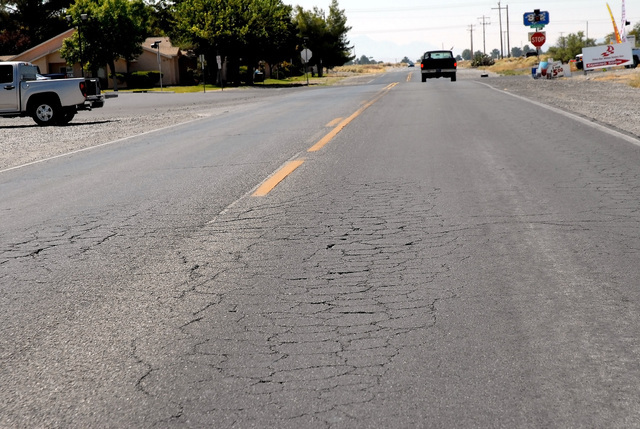 Horace Langford Jr. / Pahrump Valley Times Plans to improve Pahrump Valley Boulevard from Nevada State Route 372 to Calvada Boulevard includes adding bike lanes. The project is estimated to cost $437,000 and will be paid for through the county fuel tax increase.

The Nye County Regional Transportation Commission on Tuesday approved repairs for six roads throughout the county in the current fiscal year.

Officials said the projected $2 million cost of repairs for the six roads will be covered by proceeds from the five-cent motor fuel tax increase implemented earlier this year.

“It’s the money that we will be getting from the quarter-cent (sales tax) and the nine cent (motor fuel tax) throughout the year. It’s just a budgeted, projected amount,” Nye County Public Works Department Road Superintendent Tim Carlo said.

Carlo said the roads on the list were prioritized through their pavement condition index.

“Amargosa Farm Road has been a topic in the RTC meetings and board meetings for years now,” Carlo said.

The two most expensive projects on the list are Pahrump Valley Boulevard and Homestead Road, he said.

“Pahrump Valley Boulevard is going to be widened with the added bike lanes as well,” Carlo said.

Officials will use overlay pavement for the six approved roads as they don’t need a base rebuild. Overlay is an inch-and-a-half pavement over existing road that lasts eight to 10 years.

Next week, the county will put out a bid package for Farm Road in Amargosa.

Every project on the list will have an individual bid package except for Pablo Canyon Road, Belmond Road and Monitor Valley Road and Valley View Avenue because of their remote locations.

“I’m going to try and bid those three together because it’s hard to get bids and contractors up north,” Carlo said.

In addition, officials approved the Loomis Study to be updated for an estimated amount of $50,000. Loomis Study is the streets and highways plan that prioritizes major arterials and determines pavement maintenance value.

“I’m looking to update it because it’s a requirement of the RTC mandate,” Carlo said.

The Nye County Regional Transportation Commission is also developing a list that has approximately 50 roads across the county in Pahrump, Amargosa Valley, Beatty, Tonopah, Belmont and outside areas that will be covered by gas tax proceeds.

“This might take 15 years to get all those accomplished but we’ve got a path moving forward,” Carlo said.

The road projects will tie into the Loomis Study, Carlo said.

“These are just preliminary major arterials and these will jump around based on the Loomis Study. What they determine for a condition value, what it needs, a scope of work and a dollar amount. It’s going to work into a long-range plan with additions to it and we might pull some streets from it,” Carlo said.

The county is yet to collect the needed amount of money for road repairs on the six roads.

The motor fuel tax hike was approved in October 2015 by Nye County commissioners. The county started receiving cash from gas tax proceeds in January 2016. The proceeds average from $90,000 to $120,000 a month.

Most of the roads on the list were brought up by residents and Carlo said the RTC is still looking for input. Officials will finalize the list of projects at the meeting in November.